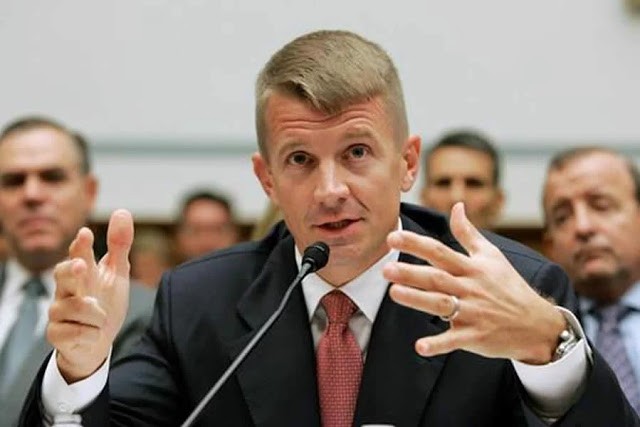 If there is any doubt that war is a business (managed from global financial centers), just check the dates, channels and context in which information about Erik Prince (and his company Blackwater or Academi has been disclosed) ) and Venezuela.

On Friday, December 13, the financial information agency Bloomberg distributed a piece with an exclusive about a personal meeting in Caracas between the “war businessman” and Vice President of Venezuela, Delcy Rodríguez. Such meeting was last month according to Bloomberg, without pointing a date, while other media have subsequently placed it between November 20 and 21. Although all the data comes from personal sources protected by confidentiality and there are no details or documentary elements to confirm the meeting.

In any case, the elements that according to Bloomberg would explain Prince’s motivations to go to Caracas, are scarcely plausible or contribute very little to explain the trip and the meeting with the second highest government official whom the security “contractor” planned to overthrow with blood and fire, according to the preceding information attributed to him (from early 2019).

The first motivation would be a kind of humanitarian operation to procure the freedom of Citgo executives prosecuted by Venezuelan justice, accused of an irregular financing plan at the energy corporation. The group (all Venezuelans but some with dual US citizenship) has been detained since November 2017 and theircapture and statements led days later to the arrest of former Citgo president and PDVSA president (previously fired) Nelson Martínez. The senior official died, due to cardiovascular disease, on December 12, 2018 at the military hospital in Caracas, while being deprived of liberty (under house arrest).

Although it is not entirely discardable, it does not sound consistent at all that the paradigmatic “mercenary” would unexpectedly become a hostage negotiator and without further process obtain the trust of the “kidnapper” (the Venezuelan) government that receives him with a private dinner in the private space of one of its main officials.

The other reason, according to the same Bloomberg agency, is that Prince went to propose a “trade agreement”.

This argument is even more incredible both for the profile of the envoy and for the context in which the “relationship” of both governments develops: Before a commercial agreement there are many aspects prior to regularize.

The agency’s report (whose owner, Michael Bloomberg, is running as a Democratic candidate for the 2020 presidential election, so he could compete with Trump) could give the explanation of the (supposed or actual) meeting, when it adds that it would be an opportunity for Maduro’s government to relieve the “financial pressure” to which it is subject.

What remains unclear is whether this pressure affects the “markets” more than the Venezuelan government itself, whose head, Nicolas Maduro, has successfully avoided Guaidó’s bid to take him out of power. So says a line below the item, in what seems to be an explicit confession of those who really feel the weight of the (de facto) “default” of the South American nation.

In this context it is worth recalling the previous public mention that was made around Prince and Venezuela. It was last April 30 (or more exactly at 1:04 am, we do not know if it was London time) when Reuters (the financial information agency that could be the direct competition of Bloomberg) published an item reporting the emblematic “entrepreneur’s” plan to form an army of 5000 mercenaries to invade Venezuela and that in the name of Juan Guaidó, contribute to the overthrow of Maduro.

As Bloomberg does today, on that occasion Reuters claimed that the spectacular revelation had been made by “four sources” who also demanded their identity be protected

There were no open confirmations or documentary data supporting the existence of the plan, but the “prestigious” British information agency was careful to notify legitimate spokespersons of the aforementioned parties in case they wanted to comment on the matter. Of course there were no reactions at that time. This time Bloomberg managed for Guaidó and Elliot Abrams to “bite the bait” and thus give continuity to the issue.

But let’s go back to April 30. That was the D-day of the “failed” (?) coup attempt that mobilized dozens of soldiers who deployed on a bridge outside a Caracas air base while intelligence service agents released Leopoldo Lopez from his house arrest. The chief of intelligence, General Manuel Cristopher, who fled to Colombia after the apparent failure (or really ineffectiveness) of the coup, participated in the plan (at least in López’s release).

The conspiracy theory element of that date and event, which links it with the financial, is that on that day the payment of the interest of the PDVSA 2020 bond (backed by Citgo shares), whose cancellation had initially been discarded by the opposition which, using Guaido, had taken control of the refining company in February. Parliamentary spokespersons alleged that the debt had an illegal origin and that the issuance of the bonds had not been authorized by the National Assembly (AN).

However, after the “coup” at its next session, the parliament dominated by the “president ” recognized by the US, approved the payment of interest (around 70 million dollars) based on an opinion of lawyer José Ignacio Hernández, designated as “special agent”. The measure was strongly questioned by opposition sectors but was imposed “disciplinarily” without any coherent explanation to date.

On this occasion it would be necessary to review that a similar event could occur that affects the markets, which are absolutely depressed by the sanctions that prevent US entities and citizens from Venezuelan business titles and bonds. Almost certainly Bloomberg’s report is covering a financial transaction.

Until the “resignation” of Ricardo Haussman in August the economic policy agenda of the Guaidó Project was defined by the restructuring of the external debt and in the context of the provisions of the Country Plan.

At the beginning of July, a document was circulated with the guidelines for restructuring, which contemplated the recognition of all debts and their equal treatment in the sense of not discriminating because their origin was financial (such as a security or bond) or commercial. In this case, it referred to invoices pending payment, replacement of import currencies or compensation for expropriations.

But Haussman’s positions were radicalized with respect to his support for commercial creditors to the point of hostility towards bondholders.

His departure with a resignation letter that he sent to Leopoldo López settled the debate on the restructuring process as the mechanism for overcoming the default in fact that “the two governments” have fallen.

To this we must add the “foul” last week when the Citgo board announced disastrous results that seem more like the certification of a looting.

If there was any hope in the markets that Citgo’s dividends were substantial enough to aspire to use them in the payment of debt, it has vanished and must have ended with the precarious recognition of Guaidó’s creditors.

Markets only recognize who has control of the accounts or assets. And in the absence of the first, which have been confiscated by European banks, the more than 30 million barrels of crude oil stored in Venezuela (which Maduro aspires to reach 100 million and which are the tangible support and in view for the Petro) and the 1.1 million barrels of oil that have been exported since November.

If there was the meeting with Prince it is not important. Whether or not it was, the essential thing is that the markets want to hear about a “negotiation” with the one who will pay them. And that is Nicolas Maduro.

And that incidentally “lubricates” the inevitable departure of the Guaidó game after his resounding coup failure. 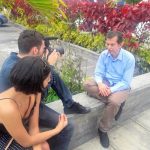