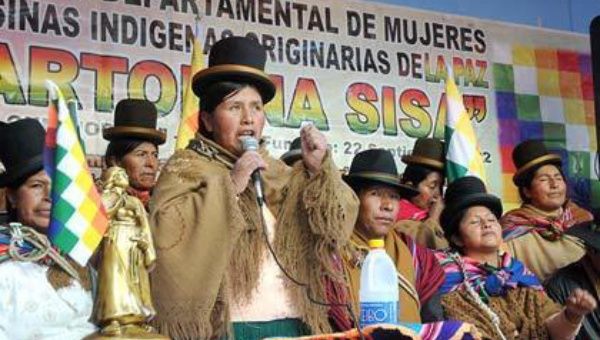 This measure has come about due to the announcement by President Evo Morales that the ‘struggle against femicide’ will be a national priority and an ‘emergency plan’ will be implemented.

Bolivia’s central government has announced they’ll double spending on preventing violence against women and will give control of the funds to local authorities, a move that comes as part of a general push in recent months, by leftist President Evo Morales, to tackle the issue of femicide and violence.

On Wednesday, Tania Sanchez director of the Plurinational Service for Women and Despatriarcalization (a state agency), announced the increase in resources given to local authorities. Sanchez also announced that the extra funding will come from a direct tax on profits made by the nationalized gas company YPFB.

Appearing alongside Sanchez was Bolivia’s minister for equal opportunities Estefania Morales, who celebrated the move and said this measure has come about due to the announcement by President Morales in July, that the ‘struggle against femicide’ will be a ‘national priority’ and an ‘emergency plan’ will be implemented.

Other measures have included increased sentences for perpetrators and reorganizing judicial proceedings so as to allow feminist groups to supervise how judges deal with cases of femicide.

RELATED CONTENT: The Normalization of Abuse: From the Sadistic Teacher to Femicide

However, the new measures are not being supported by opposition parties. Right-wing opposition candidate Felix Patzi was heavily criticized for claiming that the participation of women in politics has damaged the family and caused ‘jealousy’ and drinking which leads to femicide.

Bolivia’s most prominent women’s movement is known as the ‘Bartolina Sisa’ which is the Indigenous women’s union, affiliated with Evo Morales’ ‘Movement Towards Socialism’ party, and who had organized the most recent women’s march in La Paz.