The Foreign Affairs Ministry of Bolivia has published documents that show how the government of Argentina, under President Mauricio Macri, supplied the bullets used by the Áñez dictatorship to repress anti-coup protests in 2019 across the country, including in Sacaba and Senkata, where numerous protesters were shot dead.

In a press conference on Friday, July 9, Bolivian Foreign Affairs Minister Rogelio Mayta presented an official letter dated November 13, 2019, three days after the coup against Evo Morales, in which Bolivian military General Jorge Gonzalo Terceros, Chief of the country’s Air Force at the time, thanks the then Ambassador of Argentina Normando Álvarez García, and formally registers the delivery of 40,000 cartridges of caliber 12/70. The letter also notes the delivery of tear gas canisters and grenades.

The aforementioned letter was sent to the President of Bolivia, Luis Arce, by the current Argentine President Alberto Fernández, who also sent a letter of apology for the crime of the former Argentine administration. 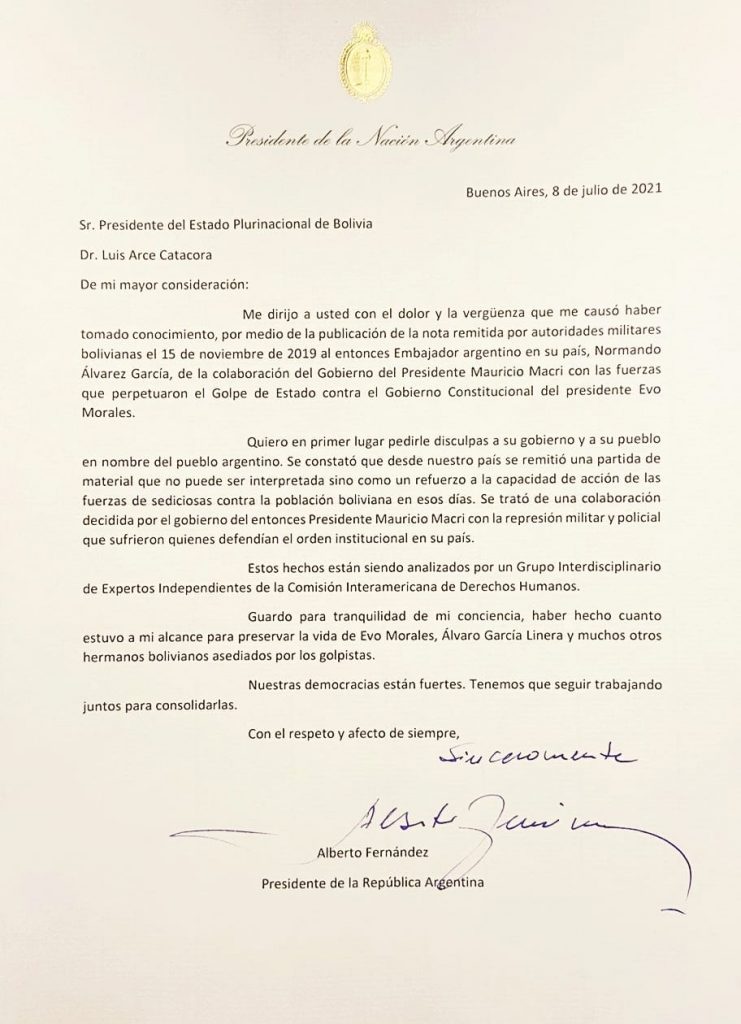 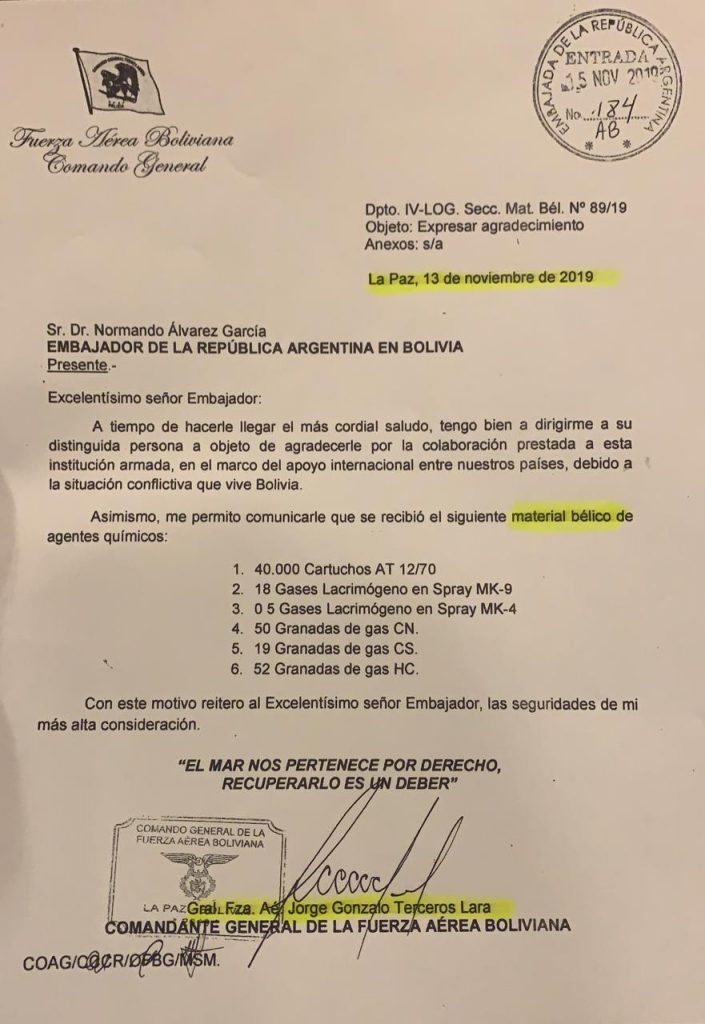 Continuing, Mayta said, “we are outraged because there was a foreign government that colluded in the execution of serious human rights abuses.”

The military aid from Argentina came at a critical moment when the newly self-proclaimed Áñez ”presidency” was facing mass protests across the country from indigenous social movements that were calling for the return of democracy. Argentina was not the only country that saved the coup in the first weeks. The neoliberal government of Lenín Moreno in Ecuador also sent emergency military aid during the same period.

Justice Minister Iván Lima stated, at the time when the matter of the Ecuadorian military aid was revealed, that Bolivia would open investigations into the foreign interference from Ecuador. The minister stated, “The investigation that Ecuador is carrying out and that we will present in Bolivia must prosecute this international crime against humanity, based on the use of these military weapons against the Bolivian people. The responsibility of Áñez and Lenín Moreno cannot go unpunished.”

On Saturday, July 10, the Security Ministry of Argentina released a report of its investigations into the role of the Macri administration in the 2019 coup in Bolivia. According to the report, on November 11, 2019 (one day after the coup), the National Agency for Controlled Materials (ANMAC) of Argentina authorized the shipment of semi-automatic pistols, shotguns, automatic carbines, machine guns, rifles, bulletproof vests, ballistic helmets, shields, night vision goggles, and more than 8,000 munitions of different calibers.

The report also revealed the presence in Bolivia of two agents of the Federal Intelligence Agency (AFI) of Argentina, who had sent continuous reports back to Argentina during the coup. One of them was in the city of La Paz, and the other was in Santa Cruz, hometown of one of the most prominent coup leaders, Luis Fernando Camacho. Argentine authorities have informed that investigations will be carried out to determine the nature and the destination of the reports that these agents had sent to Buenos Aires.

At the time of the incident, the Argentine minister for security was Patricia Bullrich, the principal opposition leader of Argentina today.

In November 2019, a total of 27 protesters were shot dead by Áñez regime forces in Sacaba and Senkata. Protesters were calling for the return of democracy and an end to the illegal Áñez dictatorship that had seized power through a coup and proceeded to rule, unelected, for 11 months.

The revelations also show the collaboration of General Terceros, who has already been arrested, with foreign powers to carry out these massacres. Terceros has hit headlines in mainstream media for false claims about the sequence of events that led to the coup against Evo Morales on November 10, 2019.

Featured image: Former president of Argentina, Mauricio Macri, sent military aid to Jeanine Áñez regime to suppress protests and carry out massacres of protesters in Bolivia in November 2019, after the coup against Evo Morales. Photo courtesy of Kawsachun News.