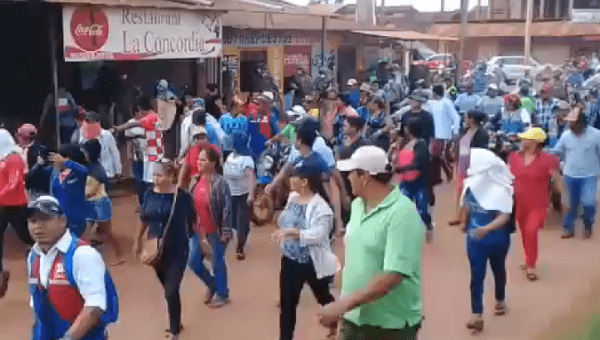 So far, Bolivia has reported 107 COVID-19 cases and 6 dead patients. The public health situation, however, could become more complicated in the short term.

Bolivia’s coup-born regime led by Jeanine Añez was emphatically protested for failing to keep its promises in Riberalta city where the population took to the streets on Tuesday morning to protest against the lack of provisions and food.

“The government locks us up and hunger will kill us,” read a poster held by a citizen from District Five, the city’s largest neighborhood where poor people make a living with their daily work. Among whom were motorcycle-taxi drivers, construction workers, and street vendors.

In the absence of concrete responses from the Añez administration, Mayor Enzo Roca said that he would deliver some food rations to the Federation of Mototaxis on Wednesday.

RELATED CONTENT: US, Canada Side with Fanatical Coup Regime in Bolivia

Banging empty pots as they walked the streets, the protesters managed to outnumber the police and military who attempted to stop them by feigning confrontations.

Roca’s promises, however, did not satisfy the people who closed off the mayor’s office to prevent him from leaving. The police had to intervene to take him to another side of the city.

“People from Riberalta city, in the Beni department, defy the total quarantine in force in Bolivia and go out in a demonstration to demand food promised by the national government and greater health security. There are no coronavirus cases in Beni so far.”

So far, Bolivia has reported 107 COVID-19 cases and 6 dead patients. The public health situation, however, could become more complicated in the short term due to the economic crisis triggered by the U.S.-backed de facto government, which dismantled the social protection system created during the President Evo Morales administration (2006-2019).

On Tuesday morning, the Movement Towards Socialism (MAS) presidential candidate Luis Arce proposed that the Añez administration request help from China and Cuba. The presidents of the two chambers of the Bolivian congress spoke in the same direction.

“The de facto government should send planes to China to buy respirators and biosecurity material for our health workers. There is no time to lose,” Morales also said.

The Socialist former president added that his country should send planes to Cuba to bring Interferon Alpha 2B, an antiviral used to treat COVID-19 patients.

These proposals, however, could be easily ignored by the self-proclaimed President Añez, who expelled Cuban doctors to ingratiate herself with the Donald Trump administration.