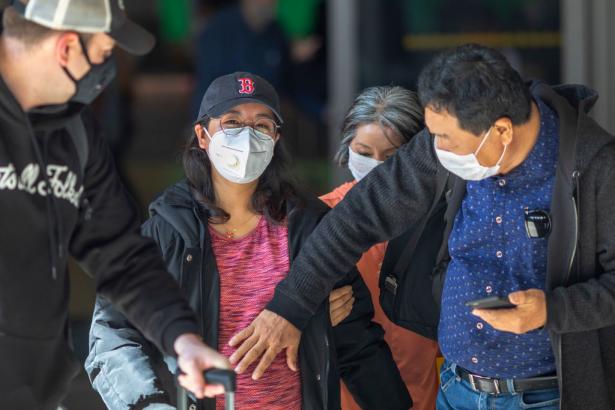 Texas and Ohio have ordered a stop to abortions, saying they’re not essential medical services. Other states will follow. Right-wing forces are using the pandemic as a pretext to crack down dramatically on abortion rights. We can’t let them.

Texas and Ohio have ordered a stop to abortions, saying they’re not essential medical services, while state officials in Mississippi and Maryland are edging that direction. Their coronavirus prevention program is “Stay home and have the baby.”

The states argued that equipment such as masks used for surgical abortions could be used for care of COVID-19 patients. And they claim if anything goes wrong emergency services would be needed, exaggerating the risk of a safe procedure.

Abortion clinics in Texas sued to halt the ban, and in Ohio, where the order was less clear, they argue they’re already complying since abortions fall under the essential category. Clinics are backed up by leading OB-GYN doctor groups, which saw this attack coming and specified on March 18, “Abortion is an essential component of comprehensive health care. It is also a time-sensitive service for which a delay of several weeks, or in some cases days, may increase the risks or potentially make it completely inaccessible.”

Of course, it’s not about masks. Anti-abortion forces are using the pandemic as a pretext, but it’s an extraordinarily poor one, since they’ve spent twenty years blocking the at-home and telemedicine pill abortions that would be useful now.

Why can’t a gynecologist or general practitioner call in a prescription for abortion pills to your pharmacy? There’s no safety reason. When the abortion pill was finally approved for use in the United States in 2000, the FDA bound it up with restrictions designed for the most dangerous drugs. These served to make pill abortions just as expensive and inconvenient as surgical abortions.

The FDA’s Risk Evaluation and Mitigation Strategy (REMS) for the abortion pill mifepristone means that retail pharmacies can’t stock the pill. Clinics that want to provide it must order it directly from the supplier. Doctors have to be approved by the FDA and put their name on a publicly available list (great for would-be assassins, not so great for docs). Further, the first pill (mifepristone) must be provided to the patient in person by the doctor. The subsequent misoprostol pills which complete the abortion are taken later at home.

Since clinics are scarce and abortion doctors scarcer, some clinics have developed telemedicine options. The doctor consults the patient online and then meets FDA requirements by remotely unlocking a drawer with the pill so a nurse on site can provide it to the patient. But anti-abortion legislatures in several states have outlawed even this workaround. In states where it is legal, a telemedicine study of abortion pills is being conducted. Becoming part of the study is one way to obtain pills now.

Anti-abortion groups are aware that their positions are shaky during a pandemic. They suggested that the Trump administration “ensure that telemedicine abortion is not expanded during the crisis and maintain FDA limits on dispensing of chemical abortion.”

Still, pandemic-safe provision of pill abortions is hampered all over the country by the FDA’s REMS requirement. Without it, you could call a doctor or clinic, they could write a prescription and call it into your pharmacy, and then you could get the pills from there or even have them mailed to you.

Aid Access, a group based in Austria, is trying to approximate this experience for US patients. The group is an offshoot of Women on Web, which provides abortion pills worldwide in countries where abortion is illegal. Gynecologist Rebecca Gomperts started Aid Access specifically for those affected by the United States’ restrictive laws. Aid Access provides remote consultation and then provides a prescription, filled by a pharmacy in India and shipped to the American patient. They ask for around $85 (compared to an average $350 for a first trimester abortion in the United States) but waive it for hardship cases.

The FDA attempted to shut down Aid Access in March of 2019, but they hired a US lawyer and responded in May that the service would continue. However, in the last few days, coronavirus has impeded their operations since flights out of India have been halted.

Several grey-market internet sites still provide pills for now. The website Plan C provides a report card on sites that provide the pill online. And in a pinch, the second pill of the combination, misoprostol, is 85 percent effective for abortion on its own (WHO recommendations for dosing instructions here). Misoprostol is readily available in Mexico and as a prescription drug in the United States to protect your stomach if you take regular nonsteroidal anti-inflammatory medication such as ibuprofen (Advil).

Then there are feminist sites that don’t provide pills but give guidance. Besides Plan C, there’s Women Help Women which has developed a phone app called Euki. Hesperian Health Guides has also developed an app, designed for use internationally.

Imani Gandy accurately characterized Texas’s COVID-19 response as “Ban Abortion, Kill Grandma” after Texas Lieutenant Governor Dan Patrick suggested that everyone should just get back to work and seniors would be willing to risk dying in the interests of “keeping the America that America loves.” She called out the contradiction: when Patrick defended Texas’s restrictive anti-abortion laws, he went on about how precious life is to Christians.

Of course, the myth that only the old will sicken and die is wrong, but it benefits employers who are trying to keep working-age people on the job — don’t worry, you won’t die! More perniciously, it undermines the social solidarity we need to get through this together.

The “pro-life” rhetoric is hypocritical, but the policies are consistent. They express the capitalist establishment’s bias toward babies (a source of future work and profit) and against past workers (retired and regarded as an unwarranted expense). As the US birth rate has declined over the last four decades, establishment think tanks have been complaining that the country skews too old.

Lining up an assault on Social Security in 2017, then–House speaker Paul Ryan said, “Baby Boomers are retiring and we have fewer people following them into the workforce…. We need to have higher birth rates in this country.”

Scott A. McMillan, a La Mesa, California lawyer, caused outrage when he summed up capitalist desires perfectly, tweeting on March 23: “The fundamental problem is whether we are going to tank the entire economy to save 2.5% of the population which is (1) generally expensive to maintain, and (2) not productive.”

Ryan and McMillan echo an obsession of capitalist think tanks which desire an increased younger population as a driver of economic growth. Meanwhile, entitlement programs — Social Security and Medicare — are a cost they are eager to shed.

What they aren’t willing to invest in, of course, is the childcare, health care, and paid leave that would make it easier for women to have children if they want to and end pregnancies if they don’t.

Jenny Brown’s book, Without Apology: The Abortion Struggle Now, is out now. You can get a copy here.