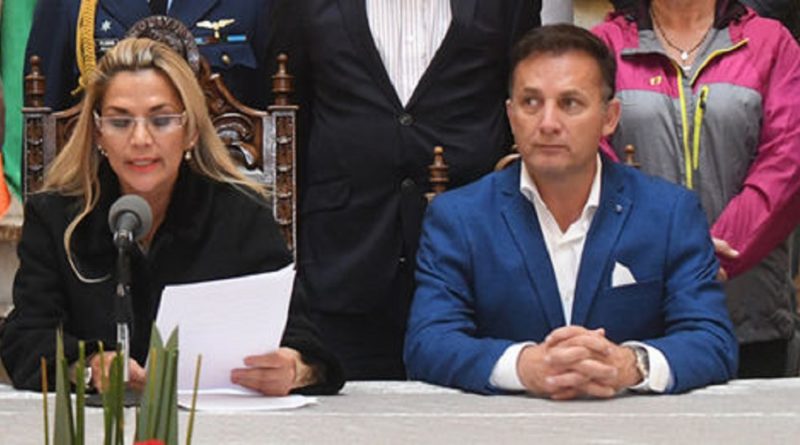 The Bolivian Defense Minister, Luis Fernando López, was filmed threatening a citizen with making him “disappear in 10 seconds” at the hands of the Army, after this person had allegedly disrespected a military man.

“He reacts and you disappear in 10 seconds, do you know that or not? I guarantee that you do,” you will hear López say in a video, recorded on Sunday and broadcast this Monday by the newspaper Página Siete

López, who used his Facebook account to apologize after the video became viral, was supervising an operation by the security forces in the municipality of San Ramón, in the department of Beni.

“I am a person who listens, but I will not allow them to disrespect and worse, a uniformed man,” López says in the recording, in which this threatened person can also be seen asking for respect from the military.

“This afternoon a lieutenant, who sent half of his troops to quarantine for being on the front lines and serving the people, was insulted by a citizen. Given this fact, my reaction was not appropriate and I do not justify myself. I offer this citizen my sincere apologies, I am very sorry,” López wrote on his facebook account.

Jeanine Anez gave her support to the minister but on Tuesday she finnaly announced his removal allegedly due to a vote of no confidence in the Congress in the middle of the public uproar created by his comments resembling a dark page in Latin American history when military fascist dictatorships created the culture of the “desaparecidos” — social activists killed and disappeared by military and police forces.

In a parallel scandal, the Minister of Labor, Óscar Mercado, has announced the dismissal of the deputy minister, Franz Choque, for “politicizing and electoralizing” the employment program, announced in late April by the de facto president, Jeanine Áñez.

In a recording broadcast that became viral on social media, Choque assures that with this government employment plan, it is possible to create up to 1.2 million “grateful” voters for the next elections scheduled for September.

“We are not going to accept the politicization or electoralization of such sensitive and important programs for the national government and the Ministry of Labor. Their presence could distort the true meaning of this employment program,” Mercado explained.

Jeanine Anez proclaimed herself as Boivian interim president in the same fashion as Venezuelan deputy Juan Guaido did and after forcing the rightful re-elected president, Evo Morales, to flee the country due to a coup d’etat led by the head of the police and the army and supported by the US government.