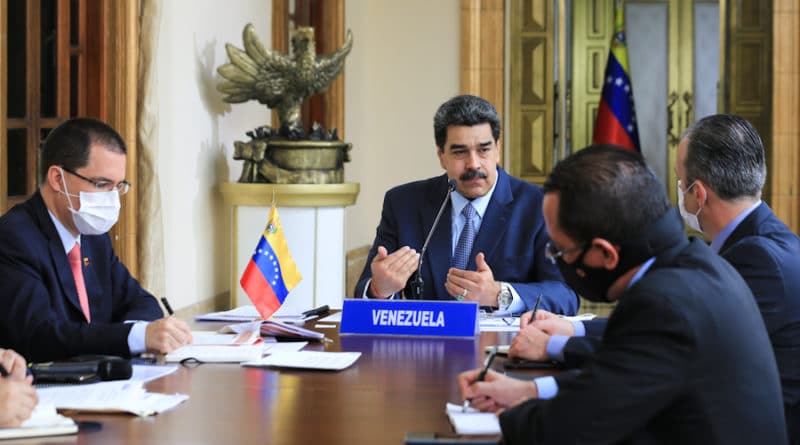 This Wednesday a high-level webinar was organized by of the Bolivarian Alliance for the Peoples of Our America-Peoples’ Trade Treaty (Alba-TCP), analyzing the issue of “the Post Pandemic World”. During the event the Covid-19 pandemic and the economic strategies that can be promoted in the post-pandemic era were discussed.
Representatives from Antigua and Barbuda, Saint Vincent and the Grenadines, Nicaragua and Dominica, from their respective countries, also participated in the conference, which originated in Caracas.
In addition, the webinar had as special guests the executive secretariat of the Economic Commission for Latin America and the Caribbean (Eclac), Alicia Bárcenas; the Spanish professor, semiologist, historian and journalist Ignacio Ramonet and the director of the Tricontinental Institute for Social Research, Vijay Prashad and the former president of Bolivia, Evo Morales.

Vaccines and treatments must be a priority for Alba-TCP 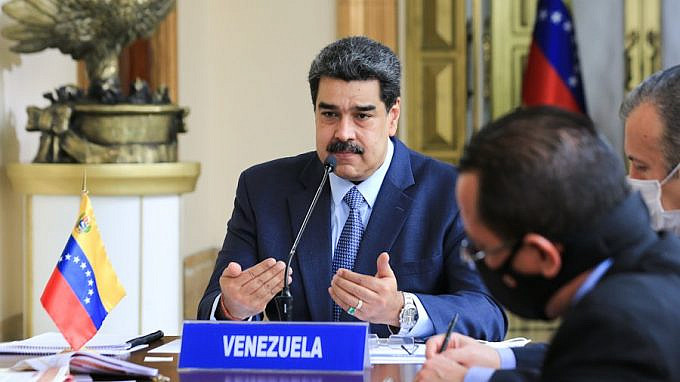 He indicated that this proposal stems from the unitary vision that the Alliance has in guaranteeing the vaccine, treatments and tests, among others. “The Alliance is the only one that has guaranteed the treatments and, through Cuba, the doctors that help the countries in solidarity.”
He criticized the fact that the Organization of American States (OAS) has remained inert, in the face of the global pandemic of Covid-19.
“The OAS has been conspicuous in its absence, they have demonstrated how incapable and inhuman they can be, given this, we have united and with outstretched arms, we are taking care of our peoples,” he said during the activity, broadcasted by Venezolana de Televisión (VTV).
Maduro also proposed the creation of an Economic-Political Council to debate the proposals presented this Wednesday. He explained that the intention is to have the theoretical, political and strategic vision on the post-pandemic panorama and to have the set of recommendations and actions to make decisions that impact the lives of the peoples immediately.

RELATED CONTENT: Bolivian Defense Minister Threatens a Citizen With Making Him “Disappear in 10 Seconds”
The proposal is to convene foreign ministers and ministers of economy of the political council within 15 days, he said.

During the videoconference, the director of the Tricontinental Institute for Social Research, Vijay Prashad, proposed 10 topics to combat Covid-19 and establish better social conditions in the post-pandemic scenario. The agenda addresses the development of nations after the pandemic has passed, considering various contributions, particularly the initiatives promoted by Commander Hugo Chávez during his government, Prashad said.

Following the proposal, President Nicolás Maduro indicated that these points will be part of the debate at an extraordinary and joint meeting of the alliance’s political and economic councils, on June 29.

During he webinar, the Economic Commission for Latin America and the Caribbean (ECLAC) proposed to establish a basic emergency income, to better serve those affected by the Covid-19 coronavirus pandemic, said the agency’s Executive Secretary, Alicia Bárcenas.
She explained that, as a result of the pandemic, it is estimated that 38 million people are unemployed and 83.5 million people can fall into extreme poverty. 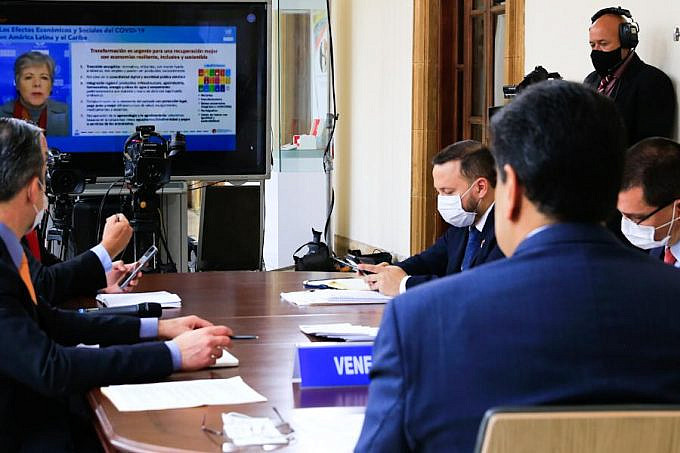 “Almost 38 million unemployed people and extreme poverty of 83.5 million. That is why we propose an emergency basic income that is equivalent to poverty so that people have a basic livelihood,” she added.
This system, Bárcenas stressed, could be established for a period of six months allowing self sustenance. Furthermore, it is estimated that about 12 million people could become unemployed.
The proposal details that tax revenues must be allocated since most are indirect and are aimed at value added tax (VAT), falling into the problems of tax evasion, when the countries of the region require three times more income for social spending, which is around 2% in health and 4% in education.
Bárcenas highlighted that the indebtedness and the interest that the countries pay on the external debt, is around 2.6%. She also emphasized the restrictions that countries currently have in the context of the Covid-19 pandemic, to procure or produce their own medical supplies, reflected in 4% of production, for which she called for real integration to get out of the crisis to face the virus.
“We must avoid going back 13 years in social achivements and head towards the construction of States and systems of universal protection. Avoid the destruction of productive capacity with subsidies, especially to retain the employment contracts of employees.” She reflected that it is necessary to change the development model and focus on the population to promote a structure with greater equality and sustainability of access to health and nutrition.
“We have an example of this in the region with countries like Cuba, Costa Rica and Uruguay,” she said during the videoconference. She called for recovering food production and culture in the face of the great historical gaps, and specified that this is the right moment to promote new strategic sectors such as universal policies and the transformation of an economy of greater harmony.

Cuban medicine has healed 80% of serious patients with Covid-19

For his part, Cuban President Miguel Díaz-Canel assured that Cuban medicine has healed 80% of seriously ill patients with Covid-19, while maintaining medical cooperation with 26 nations to face the pandemic. “While in the rest of the world 80% of critically ill and critically ill patients die, Cuban science and medicine have saved 80% of the critically ill patients infected with the SARS-CoV-2 virus,” he said.
Currently Cuba maintains 34 medical brigades deployed around the world, with some 2,500 medical professionals, at the request of their governments. This contingent joins 28,000 other professionals who provide services in almost 60 countries. 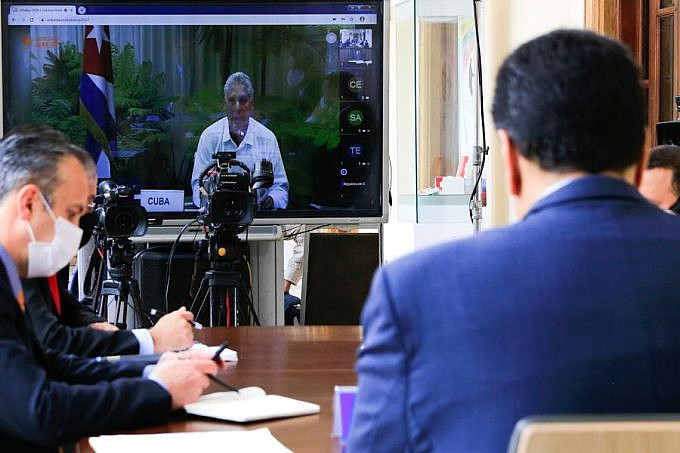 The Cuban leader pointed out that developed nations have been unable to allocate resources and face the Covid-19 pandemic, and stressed the need to make more state investment in health to guarantee the lives of citizens. Incredibly, the super-developed world, the one that steals brains and dazzles with the brilliance of sophisticated productions, has proved incapable of using its enormous resources to build a global front against a pandemic that can only be faced with two forces within reach. everyone in cooperation and solidarity,” said the Cuban president.
Díaz-Canel explained that the pandemic has clearly demonstrated the differences between governments that have defended the State as guarantor of social stability and those that defend neoliberal theories. “They shrunk it by cutting social benefits, public health services and scientific research,” he emphasized during the webinar.

On the other hand, he urged public investment in health and the guarantee of the well-being of citizens, while reiterating his repudiation on the US blockade against Cuba.
Díaz-Canel also repudiated the siege of the United States government against the people of Venezuela, and reiterated his support for President Nicolás Maduro. He also rejected recent US sanctions against Nicaragua.

Solidarity with Cuba after attack on its embassy in the US

Alba-TCP members reiterated their support and solidarity with Cuba after the attack on its Embassy in Washington, DC on April 30, Maduro said. “We ratify the absolute solidarity of Alba-TCP with the Government of Cuba in the face of the terrorist attack suffered by its embassy, and we repudiate the complicit silence of the US government,” emphasized the Venezuelan head of state.
President Maduro stressed that they are “following with interest the anti-racist awakening against police brutality” in the northern nation, after the murder on May 25 of the African American, George Floyd, in Minneapolis, Minnesota. Floyd died at the hands of a police officer, a fact that was recorded on video and broadcasted virally on social networks.
“I can’t breathe” was the last phrase Floyd uttered, a fact that contrasts with other murders of African-Americans by US police action in previous decades. After the video went viral, it sparked protests in every state in the northern nation, and the policeman was arrested almost a week later and charged with second-degree murder. 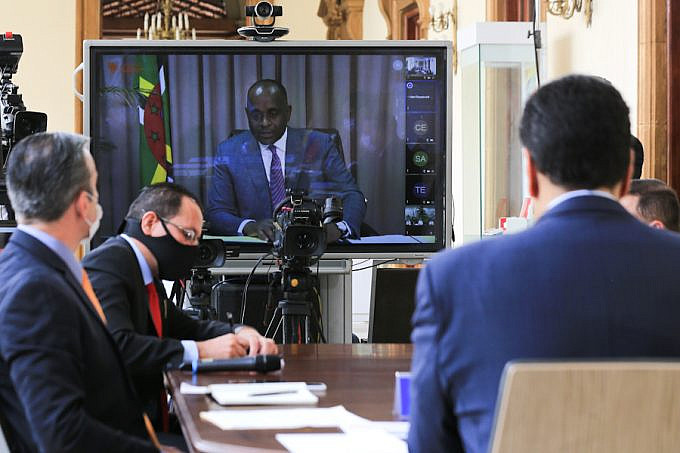 Nicaragua stands in solidarity with Venezuela and Cuba

Nicaraguan President Daniel Ortega said Wednesday that the United States commits crimes against humanity in Venezuela, trying to leave it without fuel. Ortega condemned the attacks against the republics of Cuba and Venezuela. “We understand it, because Nicaragua also suffers these same attacks,” he said.
The Nicaraguan president stressed that the peoples “neither sell nor surrender, all our solidarity with these peoples.” He highlighted the strength and dignity of the peoples of the world in the face of the challenge posed by the global pandemic of Covid-19, in his opinion, evidenced the true nature of “savage” capitalism.
“This pandemic reveals the slave essence of capitalism, as well as the empire’s aggression against Venezuela, against Cuba and against our peoples,” Ortega said.

President Maduro also reported that the Alba-TCP Political and Economic Council will be held on June 29. “The meeting of the Political and Economic Council is being proposed for June 29, to celebrate Petrocaribe’s 15 years since that meeting, everyone is invited to see the proposals,” he said.
He indicated that they are committed to reviving Petrocaribe this year with new methods, as well as the Banco del Alba and the strengthening of the Economic Council of the international organization. He also recalled that the Bolivarian Alliance was born as an alternative to neoliberalism in all its forms of expression, and became a revolutionary, humanist alliance. 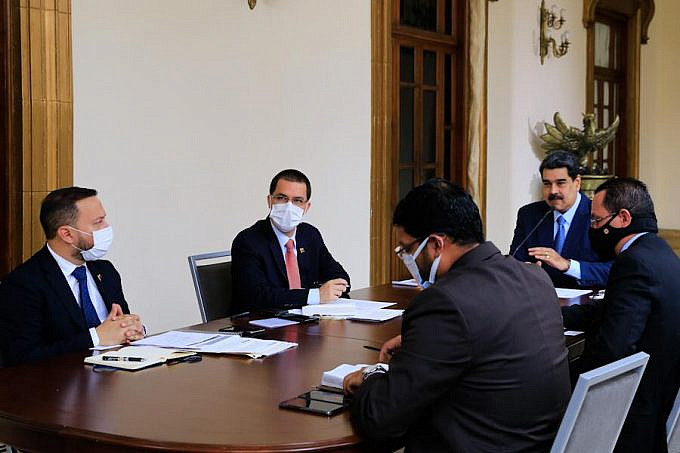 He pointed out that on June 29, the date on which the Economic and Political Council will be held, decisions must be made to give a boost to the productive apparatus and measures for social care, for the post-pandemic era. “On June 29 we must have firm decisions to give a boost and acceleration to ALBA aiming at the second semester, which will be decisive in defeating COVID-19 and taking steps towards a new economic and social, post-pandemic and anti-neoliberal model,” he stressed.
On the other hand, he stressed that ALBA-TCP has served as a vanguard for the union of the region, because it has a clear and established theory and plan.

“It is important that we preserve on the path of union, Latin America and the Caribbean. ALBA is at the forefront of the union of Latin America and the Caribbean, ALBA has reason, will and strength, has clear thinking, we have a guiding word, but we do not stay on the word, we go to concrete action. ALBA is the only multilateral group on this continent that reaches the people with education, medicine,” he emphasized.