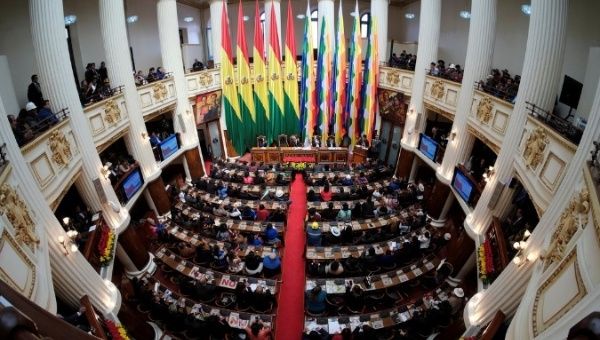 The document asks Trump to “to intercede in Latin America and prevent Evo Morales from running again for the Presidency of Bolivia.”

A group of 10 deputies, two senators and three representatives of political and non-government organizations sent a letter to United States President Donald Trump asking to “intercede” in their country’s affairs, resulting in heavy criticism from Bolivian President Evo Morales.

The document dated April 1, but published on Friday, addressed Trump “as senators and legislators of the Bolivian parliament and citizen platforms to ask you very respectfully to intercede in Latin America and prevent Evo Morales from running again for the Presidency of Bolivia.”

On the same day, April 12, the U.S. Senate, coincidently, unanimously approved a bipartisan resolution expressing “concern” over President Morales bid to a fourth term to the presidency, which Bolivia’s Superior Electoral Court (TSE) allowed in January 2019. Thus legally permitting Morales to run as a candidate in the country’s primary elections to be held on October 20 with current vice president Alvaro Garcia Linera.

However, the country’s right-wing opposition are fervently trying to disclaim the ruling, as current President Morales is leading the polls. In their latest attempt, the 15 signatory parliamentarians have gone as far as to openly ask a foreign government to meddle in the internal affairs of a sovereign nation, violating the Bolivian Constitution.

Read the letter that some opposition legislators sent to the president of the U.S., asking him to intercede to prevent Evo Morales to run for president.

As a response, Bolivian head of state tweeted that he “can not understand that there are Bolivians who ask for the intervention of the U.S. in internal affairs. They want to see again foreign military bases in Bolivia, ministers disguised as cowboys for July 4 and laws made in American law firms,” emphatically adding that “the people will not allow it.”

The Bolivian Workers’ Confederation (COB) also criticized the letter, describing the signatories as “servants of the empire”. Meanwhile, the president of the Lower House of parliament, Victor Borda, said that these opposition legislators should be tried by the Ethics Commission to accuse them of “treason to the motherland.”

According to a February 2019 poll, the current Bolivian President is leading the polls for the presidential elections with 35.6 percent, whereas the main opposition candidate, and former president, Carlos Mesa, is trailing behind at 30.5 percent.

Mesa, Morales’ leading rival, was in power just prior to Morale’s first win in 2006. He is best known as serving alongside former president Sanchez de Lozada, who fled by helicopter to Miami just as Bolivia was experiencing one of its worst economic crisis. Also responsible for the ‘Black October’ massacre, during which state security forces killed over 60 Bolivians in the context of anti-privatization protests.