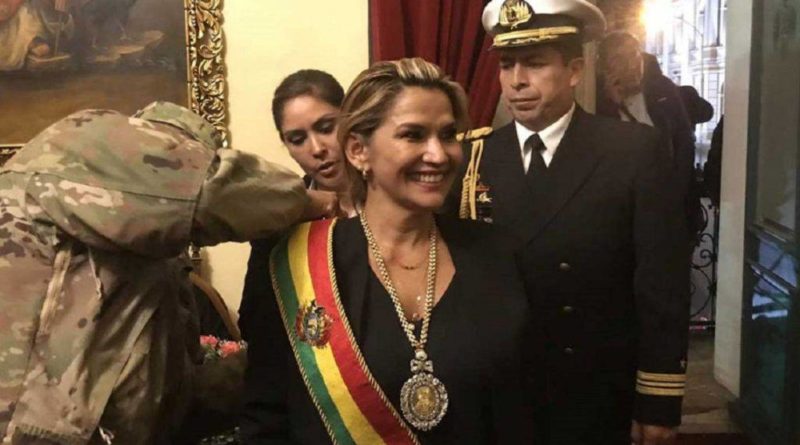 Foreign policy, an area very much in the hands of the executive branch, has afforded Bolivia´s de facto president Jeanine Añez, who does not behold a parliamentary majority, an ideal outlet for her radical program. Within days of taking power, the Añez government had cut off relations with Venezuela, expelled its diplomatic staff, recognized instead the self-proclaimed government of Juan Guaidó, and swiftly abandoned the ALBA group of states to join its right-wing counterweight, the Group of Lima. Bolivia soon reestablished diplomatic relations with Israel and rekindled close ties with the United States that had been seriously eroded since the US ambassador to Bolivia had been caught having secret meetings with key opposition figures in the midst of a violent separatist movement aimed at ousting Morales’s government in 2008.

Añez, a little-known senator whose party obtained a mere 4 percent of the vote in the last legislative elections, was ushered in after a coup toppled democratically elected president Evo Morales on November 10. It was soon clear that her lack of democratic legitimacy would not stop her from behaving as if she had a popular mandate to lead the country into a new era. She refused to personify the role of the prudent caretaker (as pro-coup spin termed it) seeking to guarantee the functioning of institutions required for the holding of elections in the shortest delay possible; and chose instead to rule.

After repeatedly pledging not to run in the elections, Añez finally announced her candidacy on January 24. Presidential candidates Carlos Mesa and Jorge Quiroga, among others in the Bolivian elite establishment, have expressed their disgruntlement with Añez’s change of heart. Her presence on the ballot will further divide the right in the context of an overcrowded race in which the candidates of the Movement Toward Socialism (MAS), Morales’s political party, are front-runners. Supporters of the November coup, both inside and outside Bolivia, are concerned that Añez’s political ambitions discredit the argument that the coup plotters were selfless political actors, dedicated to the cause of “democratization” and not their own aggrandizement.

The Internationalization of Domestic Politics
In Bolivia’s conservative restoration, there is an inseparable connection between foreign policy and the domestic persecution of the MAS and its leadership. The coup government seeks to arrest Morales on charges of “terrorism” and “sedition.” Dozens of Morales government officials and MAS leaders have either fled the country, sought asylum in diplomatic missions, or have been arrested. Within 24 hours of the MAS announcing that its presidential candidate would be former finance minister Luis Arce, the de facto government announced “corruption” charges against Arce, and when he returned to Bolivia last week he was subpoenaed before even getting through airport immigration. A former minister and vice minister, to whom the Bolivian Foreign Ministry had granted safe passage so they could leave the Mexican embassy, proceed to the airport, and leave the country, were detained and manhandled. Only an international outcry denouncing this extraordinary violation of international law ― and the astonishing duplicity of granting asylees safe passage before detaining them once out of their diplomatic sanctuary ― finally led the Bolivian government to let them go.

The man in charge of this resurgence of the “internal war” ― Latin America’s infamous national security doctrine of the military dictatorships of the 1960s and ‘70s ― is Interior Minister Arturo Murillo. Murillo makes no secret of his international alliances to root out subversives and terrorists: “We have invited [the Israelis] to help us. They are used to dealing with terrorists. They know how to handle them.”

As for the widespread denunciations of human rights abuses that have resulted from such an approach, they are, for Patricio Aparicio, Añez’s ambassador to the Organization of American States, simply “lies and falsehoods.” Aparicio labeled the report of the Inter-American Commission on Human Rights (IACHR), and its denunciation of the Senkata massacre, merely the result of the workings of “consultants and operators from a certain type of international leftism, implanted in many inter-American institutions, who are not interested in the truth.”

In line with denying human rights violations, the Añez government has lashed out at governments taking a proactive stance to protect Bolivian victims of abuses. Jorge Quiroga, Añez’s “international representative” ― who finally resigned in January to launch his own presidential bid ― called Mexican president Andrés Manuel López Obrador a “coward,” a “thug” and a “scoundrel” for having granted Morales asylum. Far from disavowing her representative’s frankness, within a week of Quiroga’s flowery insults, Añez expelled the Mexican ambassador as well as the Spanish chargé d’affaires and consul for their governments’ roles in protecting former Bolivian officials from persecution.

Añez’s next dispute was with the new left-leaning government of Argentina, where Morales currently lives in exile. There was more than a touch of irony when Añez, a president ushered in through a coup, publicly decried that Alberto Fernández, the democratically elected president of Argentina, “has no respect for democracy” on the day he took the oath of office.

A friendly neighbor
The international context has played a decisive role in bolstering Añez’s crusade against the Left. The Brazilian government, for one, has provided much support and encouragement. The Israeli foreign minister confirmed Brazil’s influence when he acknowledged “the help of the Brazilian president [Jair Bolsonaro] and [his] minister of foreign affairs” in the reestablishment of Israel’s relations with Bolivia, and, naturally, the importance of the coup: “The departure of President Morales, who was hostile to Israel, and his replacement by a government friendly to Israel, allows the fruition of the process.”

RELATED CONTENT: Morales Rejects Imprisonment of Another of his Attorneys, Patricia Hermosa

Notwithstanding the issue of Israel, it is clear that the Brazilian president is delighted with developments in neighboring Bolivia. Whereas Bolsonaro is a Catholic who was supported by Brazil’s many conservative evangelical churches in the 2018 elections, Añez is, in fact, the real thing: a devout hard-right evangelist with no love for progressive issues or for Latin America’s historic separation of church and state.

Bolsonaro has tried to help Añez in a number of ways, including easing rules for Bolivian gas imports. In December 2019, Petrobras’s 20-year-old contract with YPFB, Bolivia’s state-owned oil and gas company, expired. The negotiations taking place in the context of fast-declining Brazilian demand for Bolivian gas had been at a standstill before the coup. By December, however, Petrobras had made a temporary deal with YPFB, which gave the Bolivian government some much-needed slack until a more long-term contract is finalized. In January, the Brazilian Ministry of Mines and Energy went further; granting YPFB the right to import and sell gas on the Brazilian market, in line with Bolsonaro’s broader effort to put an end to Petrobras’s monopoly over gas imports in Brazil. While caps on the quantity of freely traded Bolivian gas will remain, the ceiling is to grow steadily on a yearly basis.

The Break with Cuba
Brazil has also led by example. By breaking foreign policy taboos, by using provocative language, and by going against the mainstream liberal consensus and denouncing multilateralism as “cultural Marxism,” Bolsonaro, like Trump, makes it easier for smaller states to emulate his extreme behavior and policies. Brazil’s bombastic, rhetorically charged deterioration of relations with Cuba is a good example. When Bolsonaro attacked Cuba’s “More Doctors” program and claimed there were “a lot of terrorists among them” ― resulting in Cuba withdrawing over 8,000 medical doctors from Brazil ― he paved the way for other countries to take similar actions. In November 2019, both Ecuador and Bolivia put an end to their health cooperation with the island and Cuban doctors were repatriated from both Andean countries by year’s end.

In 2019, Brazil was one of three countries to side in favor of the US embargo on Cuba at the annual UN General Assembly vote. In doing so, the Bolsonaro government broke with Brazil’s historic multilateralist tradition and long-held opposition to US economic coercion against the island. Añez, however, took matters one step further: on January 24, 2020, the Bolivian government announced that it was cutting off diplomatic relations. Bolivia is now the only country in the Western Hemisphere that does not have diplomatic relations with Cuba, and one of only three in the world (along with South Korea and Israel).

For decades, Cuba has sought to steer away from old Cold War diplomatic rifts. Not one to shy away from speaking out when it feels wronged or when close allies are threatened or overthrown, the Cuban government has nevertheless cultivated a cautious approach to potential detractors. Bolivia’s breaking off relations with Cuba seems to have resurfaced from another age.

Even the Trump administration, which has resuscitated Title III of the Helms Burton Law to pile more economic pressure on the island, has not yet swept aside the diplomatic relations with Cuba established under its predecessor. This is not to say, however, that Bolivia’s maverick approach to the Left in Latin America is not heartily encouraged in Washington. The influence of Marco Rubio on all things Latin American and the calculations ― or miscalculations ― of Trump’s presidential campaign keep fueling the US administration’s ever more aggressive stance toward the region. Ultimately, Bolivia’s Cold War-era politics is a leap back into a dark, undemocratic past which fits snuggly with Trump’s Monroeist vision of Latin America’s “backyard” role in the international system.

In recent days, Añez’s foreign minister, Karen Longaric, was warmly received by Secretary of State Mike Pompeo. OAS Secretary General Luis Almagro followed suit, and Longaric celebrated his “crucial role in the defense of democracy and the rule of law” and formally offered him Bolivia’s backing in his reelection bid at the head of the organization. The OAS was key in undermining the October 2019 elections and in bolstering a flawed narrative of fraudulent elections that greatly contributed to Morales’s overthrow. Longaric then gave a presentation at the Inter-American Dialogue on the importance of espousing a nonideological foreign policy. That afternoon, relations with Cuba were broken. At the event, Longaric was not confronted with uncomfortable questions.

From unlikely caretaker emerging from obscurity, to presidential candidate with a growing set of international allies, Añez has successfully made her zealous foreign policy a stalwart of her political strategy. In a regional and international context in which far-right extremism, far from being isolated, has become politically profitable, it is no wonder that Jeanine Añez should feel so emboldened. 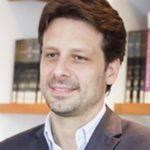 Guillaume Long is a senior policy analyst at CEPR. Prior to joining CEPR, Guillaume held several cabinet positions in the government of Ecuador, including Minister of Foreign Affairs, Minister of Culture, and Minister of Knowledge and Human Talent. Most recently, he served as Ecuador’s Permanent Representative to the United Nations in Geneva.

Guillaume Long is a senior policy analyst at CEPR. Prior to joining CEPR, Guillaume held several cabinet positions in the government of Ecuador, including Minister of Foreign Affairs, Minister of Culture, and Minister of Knowledge and Human Talent. Most recently, he served as Ecuador’s Permanent Representative to the United Nations in Geneva.