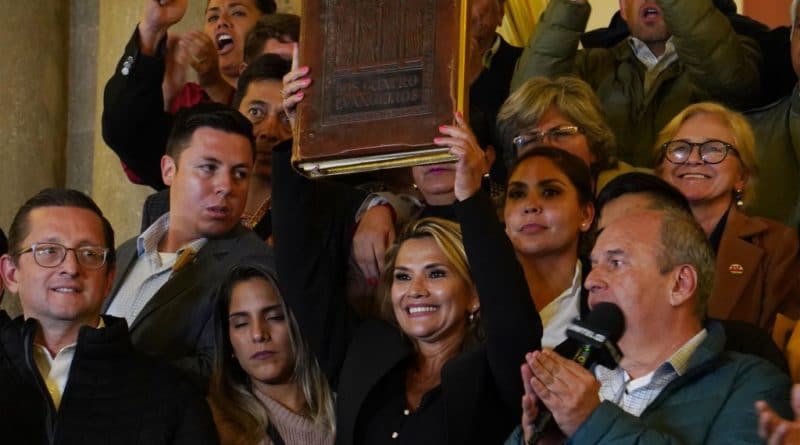 The coup-makers that violently deposed Evo Morales last month haven’t even tried to hide their far-right politics. Racist revanchism, backed by Christian fundamentalism, is now the order of the day in Bolivia.

Since coming to power on November 12, Bolivia’s right-wing coup government, led by interim president Jeanine Añez, has quickly consolidated power and achieved international legitimacy. So far, the Añez government has succeeded in calling elections for 2020; persecuting journalists, political opponents, and human rights activists; and, following two massacres of unarmed, mainly indigenous protesters that left at least nineteen dead — first on November 15 in Sacaba (near Cochabamba) and again on November 19 in El Alto (adjacent to La Paz) — negotiating a truce with the country’s trade union and social movements to remove road blockades in cities and countryside. It has also returned the armed forces to the barracks with impunity and $5 million in extra funds and equipment.

On November 21, when marchers from El Alto descended on La Paz carrying eight coffins of the victims of the November 19 massacre and demanding that Añez resign, the military and police dispersed them with tear gas to prevent them from reaching the Plaza Murillo. Several of the coffins were temporarily abandoned on the street nearby. Later that afternoon, marchers returned to El Alto with their dead, but without a response from the government, other than repression.

The following week, after negotiating with social movements and trade unions, Añez repealed Supreme Decree 4078, which was passed in secret on November 13 and overturned a 2005 law in order to protect the military and police from prosecution for the massacres they were about to commit. Añez made no reference to the massacres, which the rapporteur of the Organization of American States’s (OAS) Inter-American Human Rights Commission labelled as such on CNN. Rather than working with the commission to investigate, Añez thanked God and the armed forces “in the name of democracy” for “pacifying” the country and helping avoid “greater levels of vandalism and confrontation.”

Meanwhile, based on audio in which Evo Morales is heard instructing a coca growers’ trade union leader to tighten the blockades, cut off the food supply to the cities, and get ready for “combat” — instructions as predictable as they are prosaic — Añez has threatened to try Morales on charges of terrorism and sedition, and Interior Minister Arturo Murillo is leading an ongoing witch hunt against leaders of Morales’s party (Movement for Socialism, MAS) and government officials in Bolivia.

As for the OAS, it has yet to deliver a final election report, much less produce concrete evidence demonstrating that Morales and his party committed electoral fraud in the October 20 election. And yet after negotiating with the MAS-controlled Congress, Añez passed a new electoral law that prohibits Morales and his former vice-president, Álvaro García Linera, from participating as candidates in the upcoming election (the date for which has not been set). Shortly after blocking Morales’s candidacy, Añez reopened diplomatic relations with the US, signaling the imminent return of the Drug Enforcement Agency — and with it, counter-insurgency and the consequent deaths of innocents in the coca fields of the Chapare and Yungas.

Human rights activists are also in the crosshairs. When an Argentine delegation arrived at Viru Viru airport in Santa Cruz on November 28, a dozen of them were detained and interrogated for several hours before being allowed to reach their destination in La Paz. On the way to their gate, they were confronted by plain-clothes police shouting epithets — “Argentine commies!” “Faggots! — who pushed and kicked them as the Bolivian police looked on.

At a press conference, Interior Minister Murillo told the activists to be careful and watch themselves, since they were under surveillance, and at the slightest hint of terrorism or sedition, would be turned over to Bolivian police. He referred to foreigners who passed themselves off as gentle doves, but secretly planned to set the country on fire. For his part, the new head of police, Rodolfo Montero, announced the creation of a special forces anti-terrorist group (CEAT) in order to pursue subversive groups linked to Cubans, Venezuelans, and Colombians. US assistance will likely be forthcoming.

Though their movements were closely monitored, the Argentine human rights delegation met with victims and victims’ family members in El Alto, where, just a week and a half earlier, the Bolivian police and military had murdered ten civilians in Senkata attempting to supply La Paz with fuel for cooking and transportation. The delegation heard testimonies of rape, torture (including of children), forced disappearance, arbitrary detention, lack of medical care, and mutilation of women’s bodies. The police and armed forces carried out these brutal acts in public spaces and government installations.

The coup-makers do not hide their far-right politics. On November 29, Luis Fernando Camacho resigned as head of the leading organization behind the coup, the Comité Cívico de Santa Cruz, and announced that, contrary to promises made in the lead-up to the putsch, he would run for president, most likely with Marco Pumari, who chairs the Comité Cívico de Potosí. As usual, Camacho was wearing a white polo shirt with the insignia of the paramilitary fascist organization, the Unión Juvenil Cruceñista (UJC), that he once led. Both Camacho and Pumari appeared next to Añez, accompanied by a Bible, in the first photo taken from the presidential palace.

RELATED CONTENT: The pro-Evo Upheaval in Bolivia: How is it Affecting the Canadian Political Scene?

Camacho was the youngest vice-president of the Comité Cívico, yet owes his ascendancy to president in 2019 to his political godfather, Branko Marinkovic, a fascist of Croatian descent who, as head of the Comité Cívico de Santa Cruz, spearheaded an assassination and coup attempt against Evo Morales in 2008. Marinkovic has just returned to Santa Cruz from Mauricio Macri’s Argentina — where Camacho had sought asylum in the event that the coup failed — and maintains close ties to Brazilian president Jair Bolsonaro. Ahead of the coup, Camacho was in constant contact with Brazilian foreign minister Ernesto Araujo. Though presently riding high, it is hard to imagine Camacho/Pumari taking more than a third of the vote in next year’s contest.

The election will be crowded with candidates — such as the far-right evangelical physician Chi Hyun Chung, who took almost 9 percent of the vote in October — and no one is likely to win in the first round. Carlos Mesa, who came in second in the October 20 election, will run again at the top of the Comunidad Ciudadana ticket, though it is doubtful he will be able to equal his earlier success of 36 percent, given that Camacho sidelined him after October 20 and Añez did the same after November 12. How many urban middle-class “centrists” who voted for Mesa in 2019 will opt instead for Camacho in 2020? If they run together, will Pumari help Camacho win votes in MAS strongholds in the western highlands and highland valleys?

Possible MAS candidates include Adriana Salvatierra, who resigned as head of the Senate on November 10, and Andrónico Rodríguez, vice-president of the Coordination of the Six Trade Union Federations of coca growers that produced Evo Morales and MAS. Both Salvatierra and Rodríguez are young and relatively inexperienced in national politics, and it is hard to see either capturing more than a third of the vote. It remains to be seen how MAS will campaign in the current climate of judicial persecution and pro-government propaganda, and perhaps more importantly, how social movements will respond both to a reconfigured MAS and the interim government.

Racist revanchism, backed by Christian fundamentalism, is the order of the day in Bolivia, though for now further massacres of the working class and peasantry of indigenous descent are unlikely. Marinkovic, Camacho, and company are demanding direct political representation for agribusiness, finance, and oil and gas extraction interests located in Santa Cruz and the eastern lowlands, in which both are personally invested, and aim to return the country to the pre-2003 period of authoritarian neoliberalism by keeping Morales out of politics. We have seen this script in Brazil and Ecuador. What the golpistas could not achieve in 2008, at the height of the Pink Tide, when Brazil’s Lula da Silva and Venezuela’s Hugo Chávez led successful regional diplomatic initiatives, they have achieved in 2019, as Christian fascism, led by Brazil, advances in Latin America.

Yet militarized neoliberal projects of restoration have proven politically brittle. As Chile and Ecuador have demonstrated — and Colombia appears to be following — national-popular insurrection strikes back. Whatever happens in 2020, Bolivia will not be immune to the winds and tides sweeping from the Darien through the Andes into Patagonia.