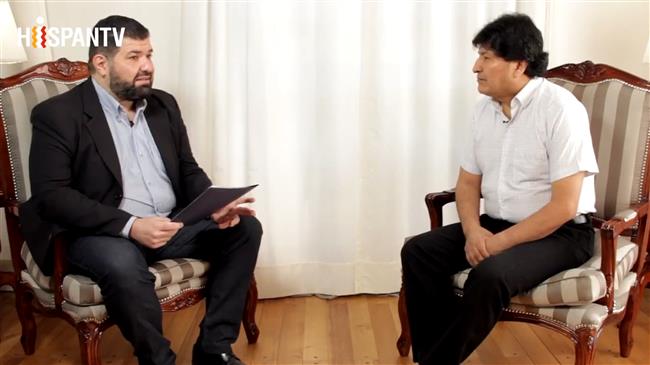 October 13, 2020.-  Bolivia’s former president Evo Morales, who resigned last year under pressure from the country’s military and US-backed opposition, warns that attempts are underway to meddle in the Latin American nation’s upcoming elections with Washington’s support.

The former head of state made the remarks in an exclusive interview with Iran’s Hispan TV Spanish-language television network on Tuesday.

Morales was seeking to nationalize the extraction of Bolivia’s lithium reserves when he was forced to resign last November under pressure from the military and following the opposition’s challenging the victory that he had secured in presidential elections a month earlier.

The former president, who both himself and his Movement for Socialism (MAS) still wield influence in Bolivia’s politics, sought exile in Mexico back then and is currently residing in Argentina, closely monitoring the domestic developments.

Citing indications of America’s ill-intention towards Bolivia’s presidential polls that are slated for October 18, he said the interim government of Senator Jeanine Anez sent one of its ministers to the United States in September to buy arms to help “establish democracy.”

He then asked, “How can one think of procuring weapons when they are considering establishing democracy?”

The ex-president also quoted remarks by Anez alleging that she would hand over the power to a “democratically-elected” government, not Morales’ MAS.

Morales cautioned that “this is a clear indication that they are preparing to either damage the upcoming elections or perpetrate electoral fraud,” reminding that Anez’ apparatus was an “interim” administration not a “transitional” one to be making such remarks.

The former statesman also warned about suspicious attempts on the part of some generals from the military command, who oppose MAS, but said they were “wrong” in thinking that they could interfere in the polls.

The polls are a battle between archrivals Luis Arce from MAS and centrist Carlos Mesa, also a former president. An opinion survey by the Bolivia-based CIESMORI research company has given the former a popularity rate of 30.6 and the latter merely 7.24.

Morales said the elections also manifest a competition between those seeking nationalization of the country’s hydrocarbon resources and those favoring privatization of the resources. The latter group, he said, prefers its own interests over the common good and is after selling off the country’s assets to foreign companies, especially American ones.

He, however, expressed certainty about Arce’s victory in the elections, calling him a trusted and long-term confidante of his.

“Currently, we need Luis Acre to revitalize the economy and we will realize this demand,” Morales noted.