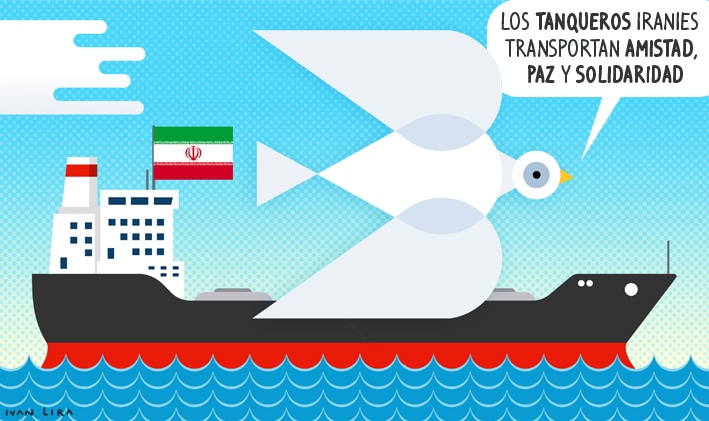 This Tuesday, John Bolton, who served as Donald Trump’s security adviser, threatened Iran for trying to bypass the illegal naval blockade imposed by the US regime on Venezuela, by sending five tankers loaded with gasoline to alleviate the fuel shortage in Venezuela caused by inhumane sanctions imposed from the United States on the oil industry.

“Iran’s attempt to oppose US priorities must be met with resolve,” Bolton wrote on his Twitter account.

In defiance of US maximum pressure campaigns, Iran is bailing out Venezuela by dispatching five large oil tankers to relieve Maduro's gas shortage. Iran's attempt to oppose US priorities must be met with resolve. China, Iran and Venezuela cannot succeed https://t.co/IMDdPRW29X

This threat is added to another one made yesterday, in which the unemployed official criticized the assistance that China and Iran offer to recover the local refineries and accused them of trying to “prop up Maduro and shame the United States.”

In recent days, the Islamic Republic of Iran announced the shipment of five tankers loaded with gasoline with the purpose of improving access to fuel in Venezuela, since, due to the coercive measures applied by the Trump administration on the Bolivarian government, it has been impossible to acquire the necessary chemicals to refine it in the country.

As if helping a victim of rape from their rapist was “opposing his priorities”. #Venezuela pic.twitter.com/ZSKCOZN7yY

RELATED CONTENT: Guaido’s Strategist (Juan Rendon) Received 300 Million from DEA to Pay the Mercenaries But Only Paid Out 50 Thousand

Given this, the US response was to undertake a media campaign against the Iranian tankers in the Atlantic Ocean and the Mediterranean Sea, an action that was denounced by the authorities of Venezuela and Iran.

Iran with a sterner tone announced that if their tankers are subject to any sort of pirate attack or blocking from the US, they will respond with similar actions against US tankers in the strait of Hormuz.

Iran, in a letter addressed to the Secretary General of the United Nations, Antonio Guterres, described the threats of the United States to its ships as “illegal, dangerous and provocative,” reserving the right to “adopt the appropriate and necessary measures against such threats.”

Twitter users such as @Taseenb joked that Bolton’s real motive might be desperation at being unemployed for so long, adding that the not very promising economic outlook of the US economy as a consequence of the White House mismanagement of the Covid-19 that has created a catastrophe in the US.