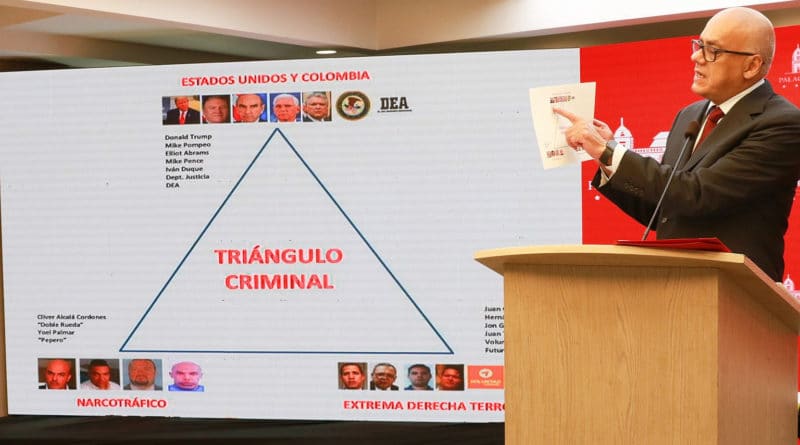 This Monday, Venezuelan minister for communications Jorge Rodríguez, presented new audios and videos with testimonies of participants of the failed Operation Gideon, who on May 3 attempted a mercenary invasion organized by a US firm on the Venezuelan coasts to try a coup d’etat against President Nicolás Maduro. In the testimonies, the Futuro Presente Foundation, directed by Yon Goicoechea, was denounced for being used as a facade to attract resources for the logistics of the camps in Riohacha, as well as for the maintenance of the mercenaries.

In his press conference, Rodríguez showed testimonies of Antonio Sequea, one of the leaders of Operation Gideón, captured on May 4 in the town of Chuao, Aragua state. Sequea stressed that the Futuro Presente Foundation, an arm to attract young people from Voluntad Popular and Primero Justicia, raised resources to activate an attack plan against Venezuela on May 3.

Antonio Sequea explains in the video that after arriving in the city of Riohacha, in the department of La Guajira (Colombia), where they were training mercenaries for the attack against Venezuela, he met lawyer Juan Torres, who explained that these camps were financed through the NGO, Fundación Futuro Presente, of which he was a legal figure.

“It is a structure that is used as a facade to camouflage the payments and so that they could sign the contracts for the different living quarters, ” Sequea confirmed. It is coordinated directly by Juan Guaidó, and it is the same NGO used to finance the ‘humanitarian aid’ that they intended to bring into the country on February 23, 2019 and to financially support the military who deserted that day in Cúcuta.

“Later we found out that it was a failure and that the funds had been diverted from that end,” he said.

The investigations of the continued plan revealed that Rayder Russo, alias “Pico” and self-proclaimed lieutenant, manages the foundation and is the one who coordinates the rental of equipment and rental of weapons, which include those for the assassination attempt against President Nicolás ripe on August 4, 2018, using armed drones.

Minister Rodríguez, who has exposed the relationship between Guaidó and actors of the Venezuelan right, such as Yon Goicoechea, who owns the NGO, which serves as a link between Sequea and the deputy Guaidó to pay for the logistics in Riohacha, as well as the maintenance of the mercenaries.

Pimienta Salazar confirms use of the NGO

These statements are ratified by another one of those captured, the deserter Víctor Alejandro Pimienta Salazar, alias “Captain Pimienta”, in his confession to the Venezuelan authorities, availing himself of the right of denunciation to achieve procedural benefits. Pepper noted that upon arriving in Riohacha, he learned of the existence of the non-governmental organization Futuro Presente, whose resources from companies and politicians acting from abroad, were managed by alias “Pico.”

“After my arrival, citizen Rayder Russo, alias “Pico”, retired and I was in charge of the administration of the resources, which were granted to me by Clíver Alcalá, specifically in the amount of 1,500 dollars a week, sometimes they were in cash, other times they were sent through the Western Union remittance house,” he said in his statements.

Antonio Sequea and Víctor Alejandro Pimienta Salazar, were captured on May 4 on the shores of Chuao, Aragua state. They planned to kidnap or assassinate President Maduro, and other government officials, according to a contract signed between the SilverCorp company – for which they worked – and the deputy Juan Guaidó. 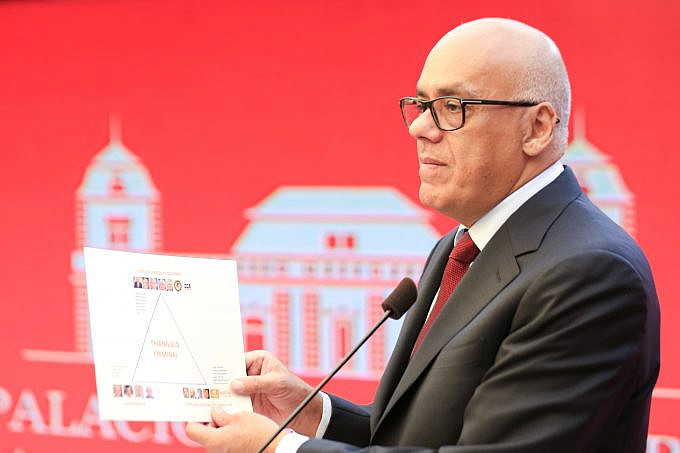 In a recording presented by Rodríguez, Alemán indicates to an unidentified interlocutor that he had connections with Clíver Alcalá, who was in charge of the raid, and acknowledges that he was in the camps in Riohacha, where they trained the participants. Likewise, the deputy mentioned the participation of the US military, called “Aguilas,” in the operation. “Everything is ready. The “aguilas” are around here some ready too. I already see everything in the operational phase,” says Alemán.

In another audio, where Alemán talks to Alcalá Cordones, it is explained that the contract signed between Juan Guaido, the parliamentarian Sergio Vergara, the political adviser Juan José Rendón, and ex-green beret Jordán Goudreau, to enter Venezuela, is valid for 18 months . “It is valid for us , but not for Guaidó. Let’s say, Guaidó did not comply. Not that he broke it. He never came through,” Alemán said. However, he adds: “There is a scope, you have to sign (to make the wheels move).”

In the conversation, it is stated that the objective is to dissolve the Bolivarian National Armed Forces (FANB), and that of every 100 officers, only three will remain, as the rest would be “neutralized” or “eliminated” .

In another audio between the two, Clíver Alcalá points out that he will not rest until he sees Nicolás Maduro, Diosdado Cabello and Leopoldo López imprisoned, to which Hernán Alemán responds: “Or fucking dead.” Alcalá replies that he did not want to say it, but “they tried to escape and they died, they drowned in the flight”, which is known as the “law of escaping” (murdering a prisoner by manipulating the scene to make it look like if it happened during an escape attempt).

Alcalá Cordones also said that Juan Jose Rendón (formerly Guaido’s chief strategist) received, from investors and the DEA, 300 million dollars to execute this plan, so it is not explained what happened to the payment that was due to be made to the Goudreau mercenary company.

On the other hand, Rodríguez revealed other evidence that shows how the plans are linked to the Central Intelligence Agency (CIA) through “James Story, Ambassador of the United States of Narnia to Guaidó.”

In this regard, an audio was presented to the media in which Hernán Alemán, Deputy of Democratic Action for the state of Zulia, talks about the meeting held with Story in the city of Miami. “He was at his residence, in a toast, and he made him speak to representatives of the CIA, they talked about this plan and Hernán surely received instructions about this plan,” Rodríguez said, while inviting Story to deny Alemán’s words.

RELATED CONTENT: Latest on Iranian Tankers Heading to Venezuela to Alleviate Fuel Scarcity Due to US Criminal Sanctions (Latest Position)

Hernán Alemán was a deputy for the opposition party Acción Democrática (AD) and has been a fugitive from justice since the end of 2019, when the National Constituent Assembly (ANC) lifted his parliamentary immunity for “treason to the homeland, public instigation of the disobedience of the laws and continued hatred, rebellion, usurpation of functions and conspiracy to commit crimes.” 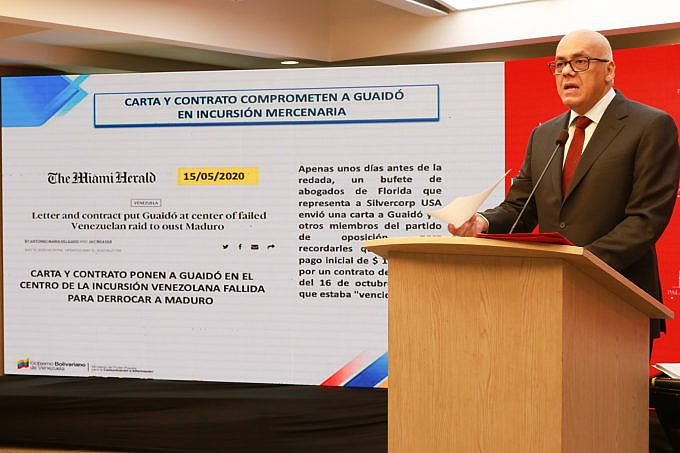 Jorge Rodriguez also showed the notebooks of the paramilitaries who participated in Operation Gideon, which show the objectives of the so-called “Jupiter Plan”, which sought to assault the General Directorate of Military Counterintelligence (Dgcim) and the Bolivarian Intelligence Service (Sebin).

“They talk about how they would assassinate the agents of the Sebin who opposed the assault, targets on the ground (…) taking of ground and murder of the Sebin and Dgcim,” he added.

The plan contemplated releasing the detainees there and using the weapons found to attack the Miraflores Presidential Honor Guard Regiment: “440 estimated and neutralized enemies,” the texts say.

As an element that still needs to be corroborated, as part of this mercenary incursion, Rodriguez stressed that it was determined to “’knock on’ Aruba, between 19:00 and 05:00 hours. “We do not know if they were referring to the escape plan or a contact they made on the neighboring island before the raid.”

Rodríguez noted that “there in Aruba they would have five vehicles plus 24 people on arrival, a safe house, planning, a change of clothes, preparation and departure when ready,” he said.

It is necessary to remember that on May 3 at night, a few hours after the first events occurred after the failed Operation Gideon, Venezuelan Vice President Delcy Rodríguez met with the ambassador of the Netherlands in Venezuela to alert him about the use of the island from Aruba to “support terrorist groups”. 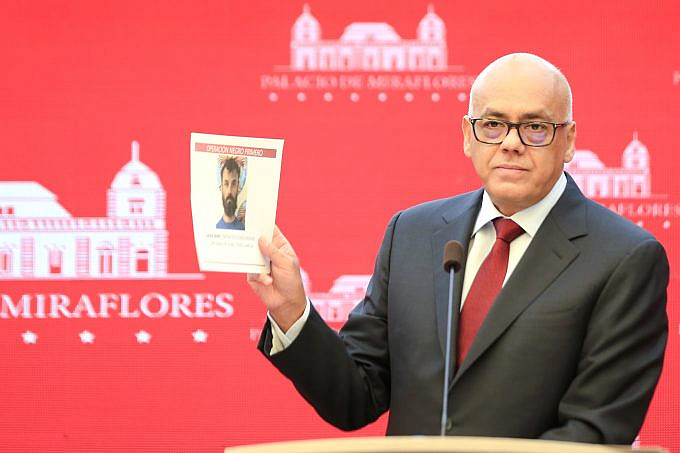 Rodríguez stressed Monday that the plans form a criminal triangle in which the administration of the United States, the Venezuelan extremist opposition groups and drug trafficking are linked.

According to the confession of Sequea, who had daily contact with Jordán Goudreau – a North American contractor and owner of Silvercorp -, the plan was endorsed and signed by the deputy Juan Guaidó, and in turn endorsed by his sponsor, the president of the United States, Donald Trump.

Berry pointed out that “for him the participation of the drug trafficker ‘Double Wheel’ (Elkin Javier López Torres) in this incursion against Venezuela was clear.” For his part, Luke Denman confesses that “the main objective was to capture President Nicolás Maduro, secure the La Carlota airport, the Simón Bolívar International Airport in Maiquetía and put Maduro on a plane (…) that would be sent by US special forces who were already ready in a place in the Caribbean to enter and take President Maduro and the other ‘kidnapping’ objectives.”

In this sense, Rodríguez maintained that “it is very difficult for anyone to doubt the participation of the administration of the government of Colombia and the United States in attacks against Venezuela.”