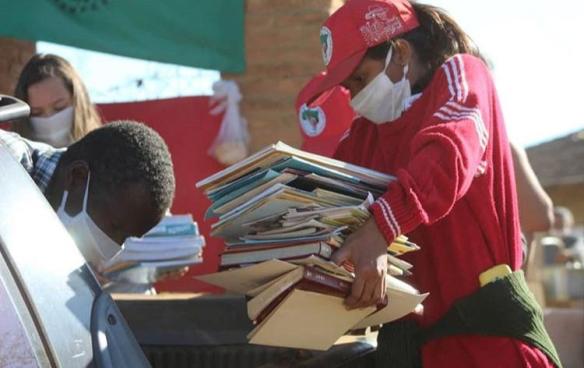 For three days more than 450 landless families of the Movement of Landless Rural Peasants (MST) resisted a violent eviction from their community by the State Military Police in the settlement of Camp Quilombo Campo Grande, in the Brazilian state of Minas Gerais.

During this attack, which lasted more than 60 hours, the Military Police destroyed houses with tractors and the “Eduardo Galeano” school, was destroyed by a backhoe, as the children who attended it were scrambling to try to save their books and toys. The MG Military Police responded by throwing gas bombs, while the community resisted without sleep. Ultimately the security forces set the place on fire, and using helicopters they dropped ashes destroying houses and crops to intimidate the farmers.

For the past 22 years, on the land of an abandoned sugar cane plant, these families have been producing healthy food. According to the MST in 2019 they produced 8,500 bags of the popular Guaií Coffee and on 1,100 hectares of land 150 varieties of pesticide-free crops such as corn, beans, honey, legumes, vegetables, chickens, cattle and milk.. Now in the midst of the pandemic, these 450 families have nowhere to go, with no work or school.

The struggle ended up in the agrarian court that ruled that 26 hectares of land had to be returned to the titled owners. However, a later decision by Roberto Apolinário de Castro, judge of the Agrarian Court of TJ-MG, increased the total to be reinstated to 52 hectares, increasing the number of affected families.

In an interview with Brasil de Fato, Esther Hoffmann, from the national coordination of the MST, defined reintegration as illegal. According to them, the families had already left the area foreseen in the court sentence.

“The police continue to threaten to go beyond the court decision, which are family parcels, which are not contained within the process of this eviction order. What they want is to illegally evict the families that produce, live, have their buildings and families in that area for more than 20 years,” she said. Basically undermining the entire project.

“They put us at risk, they evicted us in the middle of the pandemic. They are putting families at risk of contamination,” Hoffmann denounced hours before the reintegration.

Even more suspicious was that according to the director, the State Public Defender’s Office and the Public Prosecutor’s Office itself notified the Agrarian Court of the Court of Justice of Minhas Gerais (TJ-MG) that the area provided for in the decision had already been vacated.

The Quilombo Campo Grande has 11 campsites organized in the area. On average, 600 hectares of the land are planted every year.

On the other hand, the businessman Jovane de Souza Moreira is asking for the eviction of the families, who are trying to reactivate the failed plant to comply with a commercial agreement with Jodil Agropecuária e Participações Ltda. The owner of the company in question is João Faria da Silva, considered one of the largest coffee producers in the country.

Judge Walter Zwicker Esbaille Junior, of the Court of Justice of Minhas Gerais (TJ-MG) even determined the recovery in November 2018 in the first instance. However, Judge Marcos Henrique Caldeira Brant suspended the decision.

As the international financial crisis, exacerbated by the pandemic, deepens these 450 families are left out for the search of profit. Meanwhile the MST has launched a campaign of worldwide condemnation.

Featured image:  MST rushing to get books out of their school before it is destroyed