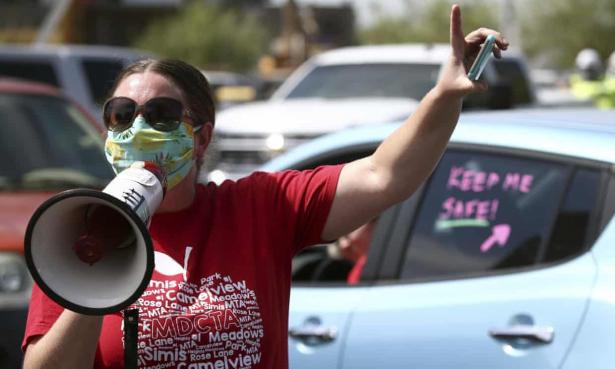 An Arizona public school district was forced to cancel its plans to reopen on Monday after more than 100 teachers and other staff members called in sick.

“We have received an overwhelming response from staff indicating that they do not feel safe returning to classrooms with students,” Gregory Wyman, district superintendent, said in a statement on Friday.

Now some activists in Arizona, which saw a high-profile teachers’ strike in 2018, said they hope teachers across America will adopt a similar strategy to keep educators safe, as some parents and politicians continue to push for schools in the US to reopen during the coronavirus pandemic.

“I’d love to see a nationwide sickout,” Kelley Fisher, an Arizona kindergarten teacher who has led protests in the state, told Reuters on Friday.

In San Tan Valley, a suburb of Phoenix, the JO Combs unified school district’s board of governors had voted to resume in-person classes on Monday. Another school district nearby had made a similar choice, pressured by some parents who argued that reopening schools would be best for their children.

The president of the Arizona Education Association, a teacher’s union, told the Arizona Republic that the two districts both decided to reopen despite not meeting the health metrics as recommended by Arizona’s department of public health.

Not a single district in Arizona currently meets all three metrics for a safe resumption of mixed in-person and online learning, the Arizona Republic reported, citing the most recently available state public health data.

By late Friday afternoon, 109 teachers and other staff members from JO Combs had already called in sick, a district spokeswoman said. That number represents nearly 20% of the district’s total staff of about 600.

“Due to these insufficient staffing levels, schools will not be able to reopen on Monday as planned,” Wyman, the superintendent, said, noting that “all classes, including virtual learning, will be canceled” until further notice.

Debates over when or how to reopen schools for in-person instruction have flared across the US. In Arizona, even as teachers are protesting to delay reopening schools, citing safety concerns, some parents have rallied to open classrooms, arguing that choice is best for their children.

Hundreds of parents and students held a rally in Phoenix last week in support of resuming in-person classes, Reuters reported. Among them was parent Christina DeRouchey, whose son is in first grade.

“We just want the choice that is best physically, mentally and most importantly emotionally for our children,” DeRouchey said.

“At some point, we are going to have to come up with an acceptable casualty rate, and nobody wants to have that conversation,” one school board member said during last week’s discussion over reopening schools, a comment the editor of Today’s News-Herald, the local paper, called “chilling”.

… in the coming months, and the results will define the country for a generation. These are perilous times. Over the last three years, much of what the Guardian holds dear has been threatened – democracy, civility, truth.

The country is at a crossroads. Science is in a battle with conjecture and instinct to determine policy in the middle of a pandemic. At the same time, the US is reckoning with centuries of racial injustice – as the White House stokes division along racial lines. At a time like this, an independent news organisation that fights for truth and holds power to account is not just optional. It is essential.

Like many news organizations, the Guardian has been significantly impacted by the pandemic. We rely to an ever greater extent on our readers, both for the moral force to continue doing journalism at a time like this and for the financial strength to facilitate that reporting.

We believe every one of us deserves equal access to fact-based news and analysis. We’ve decided to keep Guardian journalism free for all readers, regardless of where they live or what they can afford to pay. This is made possible thanks to the support we receive from readers across America in all 50 states.

As our business model comes under even greater pressure, we’d love your help so that we can carry on our essential work. If you can, support the Guardian from as little as $1 – and it only takes a minute. Thank you.