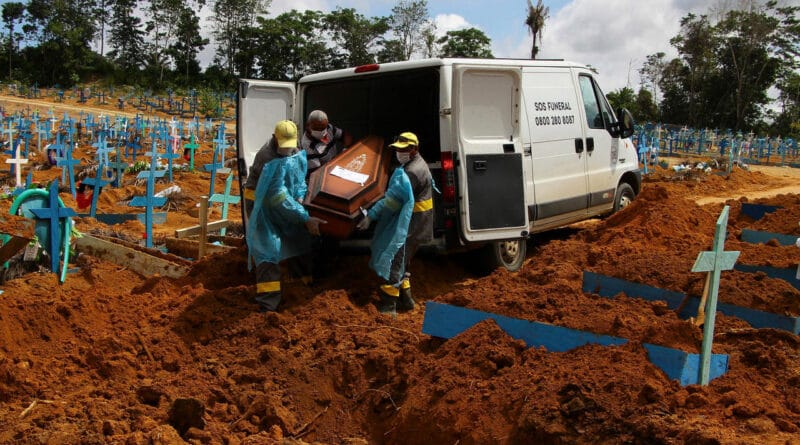 In terms of the Obama executive order declaring Venezuela an “extraordinary and unusual threat,” their considerations could very well be applied to Brazil because they quite fairly describe what is happening with the pandemic: the South American giant is currently an unusual and extraordinary threat for the region, and without exaggeration, for the world.

The map of Brazil, usually painted green in illustrations of the world, has acquired another alarming color in the emergency representations of scientific and social organizations indicating the state of the country’s healthcare system.

The organization Fio Cruz of Brazil reveals that “25 of the 27 states of the country report hospital occupancy higher than 80%.” Meanwhile 15 out of 27 states have an occupancy rate greater than 90%.

In other words, Brazil increasingly has less space in hospitals to attend to the number of infections reported each day, and each day that number climbs to record highs. In addition, added to these figures should be the practice of under-reporting, and the distrust of the healthcare system driving many to remain at home even after testing positive.

Remove Bolsonaro?
Another alarming milestone is the new statistic of deaths recorded recently. According to official reports there were 2,842 deaths on Tuesday, March 16, a human drama that many are beginning to believe could have a political remedy: the removal of President Bolsonaro.

Theologian Leonardo Boff believes that the government’s neglect of the pandemic is a deliberate crime against Brazilians, a literal genocidal operation that the judicial authorities must stop.

“It is intolerable to accept that 2,842 lives are claimed in a single day,” Boff posted on Twitter. “The Supreme Court, one of the highest powers of the Republic, should remove the president so as not to be an accessory to the genocide, and immediately call for the formation of a national government of salvation. It is an ethical imperative.”

On the social media network, Boff urged the Federal Supreme Court to make a decision that, instead of aggravating the health crisis, could serve to begin resolving it: dismiss Bolsonaro and form a government of “national salvation,” a quite pertinent name for such a decisive time for Brazil.

President disapproval
André Viera, a correspondent for Telesur in Brazil, highlighted on his Twitter account that the rejection of Bolsonaro’s administration is 54%. The number represents results from the pollster Datafolha, and indicates that the president is still a lucky guy. Faced with the crisis in his country, this number could be much worse.

Bolsonaro’s determination to continue resisting the severity of the pandemic is a dangerous political trial that is costing the health of the people, and is turning Brazil into a viral danger for Latin America.

Venezuela warned international organizations of this situation and requested that their offices try to influence Brazil; because in addition to the health of Brazilians, the lives of the citizens of other countries are at stake.

Matter of time
If the Brazilian authorities do not act, the country would become a huge cemetery and a factory for COVID-19 mutations.

The Brazilian variant P.1 found in Manaus is, according to scientists, the most contagious, and probably a more deadly strain. This variant is already widespread within Brazil and has even reached nations in Europe.

But while multilateral organizations delay their response, the geopolitical interests of the US move like a “featherweight.” Washington recently revealed that it consciously pushed Brazil away from purchasing the Sputnik V vaccine to protect its population from the virus.

The US argument was more motivated by political and subjective concerns than a measure of scientific caution: by preventing Brazil from buying the Russian vaccine they supposedly saved the region from Russia’s “malign influence.”

For the United States, it is worth little if Sputnik V is effective against the pandemic, since for the US this would “undermine its security,” revealing that it cares very little if there are many who die in its game of maintaining its influence in the region.