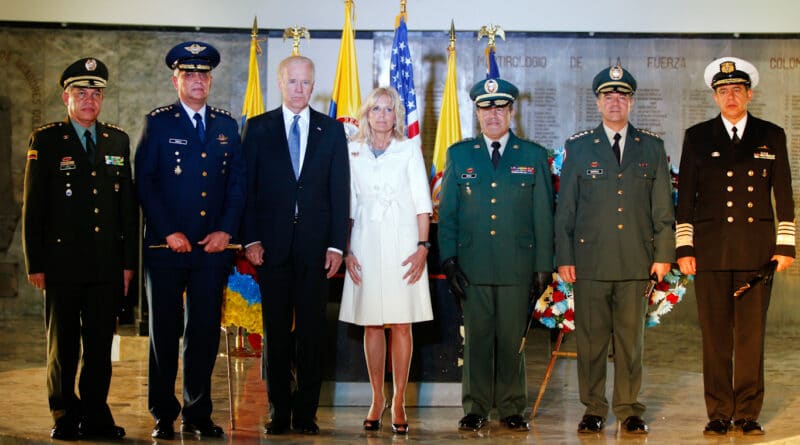 Colombia is set to return to a massive aerial campaign of spraying Monsanto’s glyphosate across the country, a plan Biden once fought hard with his Republican colleagues to enact.

BOGATA, COLOMBIA — In an effort supposedly aimed at reducing cocaine production, Colombia is set to return to a massive aerial campaign of spraying Monsanto’s glyphosate across the country. Defense Minister Diego Molano confirmed that the highly contentious practice of fumigation — shelved since 2015 — will resume in April.

“The constitutional order is clear: the Colombian military must develop operations all over the country to ensure the safety of Colombians,” Molano announced. “That’s why we’re using every tool at our disposal to protect the entire population.” How spraying a known carcinogen across a nation nearly twice the size of Texas would protect citizens, he did not explain.

The news was greeted with applause in Washington D.C, a State Department report describingit as a “most welcome development.” The new administration also confusingly described Colombia as a “bright spot” in regional counter-narcotics, despite also noting that the country had seen “explosive growth” in cocaine production in recent years, rising to become “the world’s top cocaine producer and exporter.”

The report also singled out Venezuela and Bolivia — socialist-run states with nothing like the drug production Colombia has — as problem cases refusing to cooperate in the war against drugs.

Colombia’s move signals a return to the policies associated with the controversial Plan Colombia era (2000-2015) and far-right president Alvaro Uribe. What was originally developed as a reconciliation and development proposal by former president Andres Pastrana in 1999 was radically altered by the Clinton and Bush administrations, who turned it into a massive, militarized drug war, supplying arms, money, and political support to the hardline government and its paramilitary allies to go after the leftist FARC guerillas who controlled much of Colombia’s extremely fertile countryside. The result was a nationwide chemical defoliation regime, not unlike that seen during the U.S. bombardment of Vietnam and other southeast Asian nations, forcing huge numbers of people off the land and into overcrowded urban slums.

Under Plan Colombia, government troops and associated paramilitaries were given a free rein to kill whom they liked, later framing their victims as FARC guerillas. Under Uribe’s watchful eye, over 10,000 innocent people — many of them farmers’ union leaders and indigenous activists — were slaughtered, the government only later admitting they had no connection to FARC. The U.S. directly funded the slaughter; the more dead “narco-terrorists” that were reported, the more money and weapons the U.S. would supply. Under Plan Colombia, the country also became the most dangerous place to be a trade unionist, according to Amnesty International, with more unionist murders happening inside Colombia than in all other countries combined.

The United Nations estimates that 7.4 million people are internally displaced to this day because of the ongoing civil war and Plan Colombia, with millions more leaving the country altogether. All the while, classified U.S. government documents identified Uribe as one of the nation’s most important drug traffickers, an employee of the infamous Medellin Cartel and a “close personal friend” of drugs kingpin Pablo Escobar. Profits from drug-running fundedUribe’s elections in 2002 and 2006.

While cocaine production did drop in Colombia (temporarily), producers simply moved across the unguarded borders to neighboring nations. Cocaine is extremely portable and simple to produce, with barely more than a few cooking pots and household chemicals needed. Thus, the overall trade was largely unaffected by over a decade of bombing, spraying and violence. What was achieved, however, was that organic, unspoiled land was cleared for large agribusiness and mining companies to move in.

“The guy who put together Plan Colombia”

In his own words, Joe Biden is “the guy who put together Plan Colombia…straighten[ing] that government out for a long while.” When the bill came to the Senate floor, Biden worked with Republicans to push for a hardline strategy, declaring that, “What is at stake is whether or not Colombia becomes a narcostate or not,” warning that if the bill was not passed, the hemisphere would turn into a haven for terrorists and drug dealers.

"I'm the guy who put together Plan Colombia".#PlanColombia used murderous, failed drug war policies as cover to destabilize democracy in South America, arming right wing death squads so openly that Congress had to force it to stop with an amendment. pic.twitter.com/8qtLhirf1P

Biden is also proposing a plan for Central America based on his Colombian model. It is therefore unsurprising that the new administration is welcoming the return to chemical spraying.

The War on Drugs gets a revival

Plan Colombia was ditched by President Juan Manuel Santos, in power between 2010 and 2018. Santos stopped the defoliation campaign in 2015 in part of a broader move to negotiate with the FARC. The next year, his administration signed a peace deal with the guerilla group, which saw them formally disband and give up their arms. Santos was awarded the Nobel Peace Prize.

However, with the election of Uribe protege Ivan Duque in 2018, the government began to renege on its promises, and a new wave of violence reemerged. Government authorities or far-right paramilitaries closely associated with them began to use the list of former FARC members who signed the accord as a hit list. At least 259 have been killed, according to Colombian human rights group Indepaz, who notes that there have already been 17 massacres in 2021 alone, with many of the victims’ social leaders and activists. Ten former FARC members have been murdered in the past three months.

To this day, the Duque administration is still using them as a justification for violence against its own population. Earlier this month, it conducted an airstrike against a FARC splinter group in the southern province of Guaviare. 12 children are feared dead from the attack. Defense Minister Molano confirmed the military knew there were children in the area, but insisted all those dead were forced child soldiers and part of a “war machine who were planning terrorist attacks.”

The news of a return to spraying is particularly striking, as Monsanto’s parent company Bayer announced last year that it was putting aside up to $10.9 billion to settle lawsuits from cancer patients, a tacit admission that it knows its product is carcinogenic. U.S. courts have already concluded the same. Thus, the decision to expand its use in Colombia is yet another starling fact about the return to what amounts to chemical warfare.

Ultimately, very little about the war on drugs, from the demonization of Bolivia and Venezuela to propping up a known drugs trafficker as president to now cheering the return of the discredited and harmful practice of fumigation makes any sense, if we assume the U.S.’ goal is to uphold human rights or reduce the flow of illegal narcotics. However, if viewed through a cold realpolitik lens, where the U.S. is attempting to destroy resistance to its rule and keep the enormous wealth of the equatorial country in just a few —mostly Western —  hands, then the confusing Colombian case becomes considerably clearer.