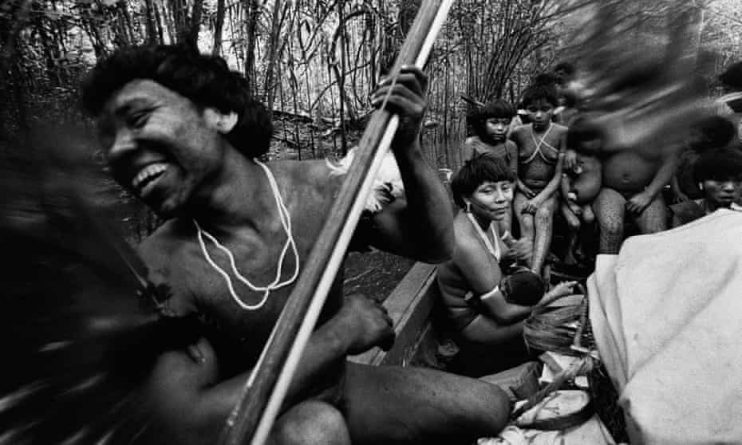 The indigenous leader and campaigning photographer who fought to create Brazil’s biggest tribal reserve warned it could be threatened under the far-right government of the president-elect, Jair Bolsonaro, as a major retrospective exhibition opens.

Bolsonaro has said the Yanomami reserve, which at 9.6m hectares (24m acres) is twice the size of Switzerland, was too big for its indigenous population.

“The president already said that the Yanomami territory is very big. I don’t know if they will try to cut it down,” said the photographer Claudia Andujar, whose images have been shown internationally and whose latest exhibition, The Yanomami Fight, opened on Saturday at the Moreira Salles Institute in São Paulo. “We already fought so much! We will have to continue.”

Bolsonaro takes office on 1 January with promises to legalise mining and commercial farming on indigenous reserves and end the “fines party” of environment agencies. He has pledged to help the illegal artisanal gold miners called garimpeiros whose destructive work has been described by campaigners as an epidemic in the Amazon. His incoming environment minister, Ricardo Salles, whose appointment was recommended by agribusiness groups, has said he wants the “defence of the environment with the support of economic development”.

“They don’t want to respect where we live,” said Davi Kopenawa Yanomami, an indigenous leader and shaman from Brazil’s Yanomami people and president of their association, Hutukara. “The forest is a sacred place for the Yanomami people … we don’t want the whites to ruin it.” Andujar’s new show, with help from Hutukara and the Brazilian environmental group Instituto Socioambiental, , was planned as an historical retrospective of her work with one of Brazil’s most emblematic indigenous peoples, said the curator Thyago Nogueira. Then Bolsonaro won October’s election on a far-right agenda, praising the military dictatorship that ran Brazil from 1964-1985 and promising to roll back decades of Amazon and indigenous protection.

“What was meant to be a historical project became an urgent political project,” said Nogueira.

One floor of the exhibition features Andujar’s sensory, immersive photographs of Yanomami daily life and culture. Another features their struggle for survival during two catastrophic periods in their history: when the military dictatorship of the 1970s drove a road through their forest as it forcibly developed the Amazon, and when 40,000 garimpeiros invaded in the 1980s. Andujar, 87, who was born in Switzerland and moved to Transylvania as young child, has lived an extraordinary life. She and her Swiss mother escaped the Holocaust but her Hungarian Jewish father and most of his family died in Nazi concentration camps. They fled to New York where she married a Spanish refugee before moving to Brazil. She worked as a photographer for magazines such as Life and the Brazilian magazine Realidade. In the 1970s, she spent long periods with the Yanomami, then one of Brazil’s most isolated groups.

Her work became political when the military government began building a highway across Yanomami lands, which was part of a national integration plan to forcibly develop the Amazon and settle it with landless workers from the semi-arid north-east.

A report by a military government prosecutor revealed that across the Amazon indigenous people were tortured and killed and entire tribes wiped out during the dictatorship. And as Brazil’s Truth Commission into state human rights abuses showed, the highway proved devastating for the Yanomami. There was little or no provision for the impact of diseases they had no immunity to, and measles, flu and tuberculosis decimated communities. Andujar became a health worker, photographing Yanomami people for medical records.

“They got sick, there was nobody there and they died,” said Carlo Zacquini, 81, an Italian Catholic missionary who worked with Andujar. “We tried to help.” A shot by Andujar of the Yanomami in 1974. Photograph: Claudia Andujar

Andujar was expelled from Yanomami land in 1977 – but went back a year later with Zacquini and the anthropologist Bruce Albert to set up the Commission for the Creation of the Yanomami Park. She met Kopenawa in the 1970s when he was just a boy – even though a government employee told him not to talk to her. He has said she taught him to fight for Yanomami rights.

“She was good, a courageous women who assumed the responsibility she promised … she saved the life of the Yanomami people,” he said. Yanomami land is rich in minerals. Artisanal miners who dredge rivers for gold, polluting them with the mercury they use in extraction, began entering in the 1970s. By the 1980s the invasion had become a flood. Brazil’s indigenous agency Funai fuelled it, abandoning the area then expelling NGOs and religious groups after the government widened an airport. Epidemics swept Yanomami as an estimated 40,000 garimpeiros toiled in their forests.

Andujar and Kopenawa travelled the world, campaigning in Europe, and delivering a hard-hitting report on health and sanitation to the UN secretary general in 1989. The Brazilian government proposed splitting the territory into an “archipelago” of 19 smaller protected areas – a plan which would have proved disastrous for the people – but capitulated days before hosting the 1992 UN Earth Summit and demarcated the reserve Bolsonaro now threatens to reduce.

“I just worked on this for years,” Andujar said. “It was a very difficult time. But like I said, we did it.”

Bolsonaro’s government, which takes office at the start of 2019, plans to move Funai to a new ministry of women, family and human rights headed by Damares Alves, an evangelical pastor. She co-founded a religious group that together with another missionary organisation was ordered by a judge to remove a staged “documentary” about infanticide in indigenous groups from the web. In a separate case, prosecutors have sought £610,000 in damages over the film. Alves has also said she would “review” Brazil’s policy of not contacting its 100-plus isolated indigenous groups – Funai policy since 1987. Her comments sparked an open letter from its specialists defending the policy.

“She won’t respect the indigenous people of Brazil,” said Kopenawa.

On Monday Bolsonaro confirmed local media reports that his transition team was preparing a decree to revoke the protected reserve status of Raposa Serra do Sol, another indigenous territory in the same Roraima state as the Yanomami, to exploit its mineral riches and “integrate the indigenous into society” with royalties, he said, according to Rio’s O Globo newspaper.

Kopenawa has disagreed with Bolsonaro’s argument that indigenous people want western consumer lifestyles and that their lands should be developed. He said the Yanomami land, where isolated groups still live, should be respected.

“My people didn’t tell anybody that we want to become white, that we want mining, that we want money. Money also passes away like rain,” he said. “Money is like the wind … it comes and goes. I have never seen a rich indigenous person in our country.” Andujar spent long periods with the tribe in the 1970s. Photograph: Claudia Andujar

… we’re asking readers to make an end of year or ongoing contribution in support of The Guardian’s independent journalism.

Since URL: The Guardian