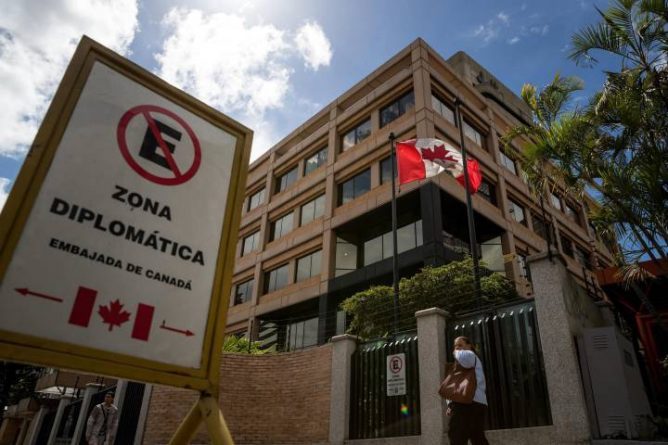 Ottawa also vowed to review the status of the Venezuelan diplomatic corps in Canada.

Merida, June 3, 2019 (venezuelanalysis.com) – Canadian Foreign Minister Chrystia Freeland has announced the “temporary” closure of her country’s embassy and the withdrawal of diplomatic personnel from Venezuela, claiming Ottawa had “no choice.”

In a Sunday press statement, Freeland accused the Maduro government of haven “taken steps to limit the ability of foreign embassies to function” by failing to renew visas for diplomatic personnel. No evidence was provided to support the claim. She additionally claimed that that the Caribbean country is “slid[ing] deeper into dictatorship.”

The measure is to take immediate effect, with diplomatic visas reportedly due to expire at the end of June. All embassy and consular services are to be transferred to the Colombian capital of Bogota over 1,500 kilometers away.

Freeland also indicated that Ottawa will “evaluate” the status of Venezuelan diplomats in Canada “appointed by Maduro.”

Canada was the second country to recognize Juan Guaido after he swore himself in as “interim president” on January 23. It has since continued to back Guaido’s attempts to oust the Maduro government and has begun to forge diplomatic relations with the opposition leader’s representative in Canada, Orlando Viera Blanco, who has held a number of meetings with government representatives and members of parliament in Ottawa and Vancouver. The Trudeau administration has also followed US President Donald Trump in imposing several rounds of sanctions on Venezuela.

RELATED CONTENT: Why is Ottawa Aligning Itself with Venezuela’s Most Anti-Democratic Elements?

It is unknown how many Canadian citizens in Venezuela this measure will affect, but recent opposition-led estimates suggest that there are up to 50,000 Venezuelans living in Canada.

The latest diplomatic spat follows a similar confrontation in March, when the United States and Venezuela both withdrew their diplomatic teams, severed diplomatic relations and vacated the embassies. The United States had likewise recognised Guaido envoy Carlos Vecchio as Venezuela’s representative in the country.

The diplomatic standoff came to a head in Washington when US government forces violated the Vienna Convention and breached the Venezuelan embassy building to evict a group of US citizens safeguarding it with the backing of the Caracas government, leading to a number of arrests.

The far-right Bolsonaro government, which similarly recognises Guaido as the legitimate Venezuelan president, had previously invited his envoy, Maria Teresa Belandria, to present her credentials at the Presidential Palace last Tuesday, only to later inform that the invitation had been withdrawn.

“I was uninvited,” she told Reuters, downplaying the political impact of the news.

Oliver Stuenkel, a professor of foreign relations at the Getulio Vargas Foundation in São Paulo, suggests, however, that the move may suggest Brasilia is losing faith in Guaido’s efforts to oust Maduro.

“[The government] realize[s] Brazil has to deal with the reality that Maduro is not going anywhere right now,” he explained.

“Recognition of Guaido’s envoy was never agreed to by the military,” he said.

Guaido promises Maduro will go this year
Guaido, for his part, told supporters in Venezuela that he will achieve his objective to seize power by the end of the year.

Speaking at a small gathering in Barinas State, Guaido proclaimed, “We are in times of definitions, of advances, of actions (…) This didn’t start in 2019, but I’ll tell you something, it will end in 2019.”

Guaido has previously promised supporters that he would force humanitarian “aid” into Venezuela, convince the armed forces to join his cause, and call new presidential elections. He also led a failed putsch in April.

Taking to Twitter Monday, Guaido further reiterated his pledge to do “what is needed” to oust Maduro, echoing Washington’s statements that “all options are on the table” regarding Venezuela.

Guaido has openly called for a foreign intervention into Venezuela, and is currently calling for Venezuela’s reincorporation into the Inter-American Treaty of Reciprocal Assistance (TIAR), a mutual defense pact involving sixteen countries in the hemisphere which has been cited as a possible legal justification for US military action.