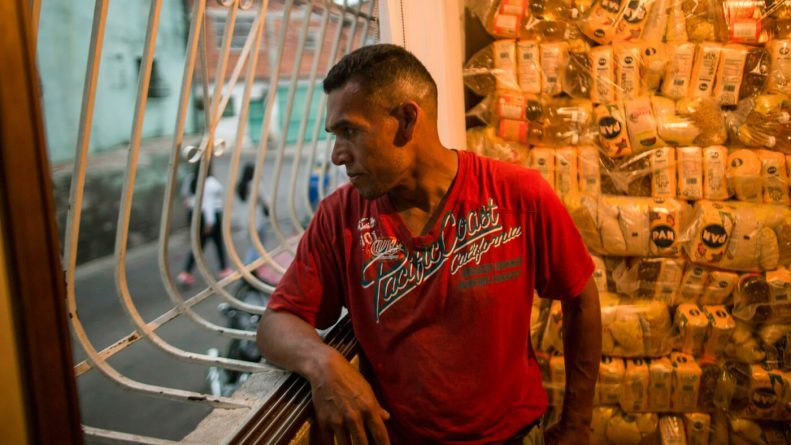 WOLA’s hawkish stance on Venezuela may seem surprising for a “human rights” organization, but it is less of a surprise for those familiar with WOLA’s history.

The Washington Office on Latin America (WOLA), a self-described “human rights” NGO (non-governmental organization), has been circulating a June 1 press release ostensibly urging the return of democracy to Venezuela.

The press release cites the “value” of “pressure mechanisms” such as “multilateral” sanctions when they are “linked to clear outcomes, and avoid harming the broader population.” But sanctions against Venezuela are largely unilateral coercive measures by the United States aimed at fomenting regime-change fever among the population and have resulted in the deaths of 40,000 Venezuelans during the Trump administration.

Addressing one round U.S. sanctions, WOLA touted the “several virtues” of the measures before generally condemning unspecified and “broad” sanctions that worsen the humanitarian crisis.

“We believe that a peaceful, democratic solution to Venezuela’s crisis must also involve creative and persistent diplomacy,” WOLA continued, adding a call for support for new elections.

It is convenient timing for the so-called human rights NGO to posture, since Venezuelan opposition leader and self-appointed “interim president” Juan Guaido has already demonstrated his inability to conduct a large-scale military coup, and his other attempts to overthrow the elected government of Venezuela have failed spectacularly.

WOLA goes on to state that it “supports” the mediation efforts between the government and the opposition by “the Norwegian government.” It does not disclose that its largest donor is, in fact, the Royal Norwegian Ministry of Foreign Affairs.

Moreover, those talks hit a stalemate. As the Miami Herald notes:

Between the different points discussed, the Guaido delegation went with a mandate that any proposal concerning a presidential election was conditioned on Maduro not holding power.”

In other words, the opposition refused to agree to reconcile through democratic elections if Maduro runs. Yet, twice in the press release, WOLA made clear its support for new elections. The press release is, in fact, the latest in a long list of provocations against the Venezuelan government by the so-called human rights organization.

Human rights NGO or imperial think tank?
WOLA’s presentation as a human-rights NGO is dubious at best. Its Wikipedia page reads more like that of a Beltway think tank, with funding from foreign governments and a myriad of various foundations and private individuals – including the George Soros’ Open Society Foundation and the Ford Foundation- which comprise the United States’ soft-power apparatus.

WOLA provides information and analysis for the White House and Congress and receives wide circulation in the media as an authority on Latin America, characteristics more indicative of a foreign policy think tank than a human rights NGO.

The group’s hypocrisy in its unequivocal support for the Venezuelan opposition while branding itself as pro-human rights has spurred Noam Chomsky and a handful of other academics and intellectuals to write at least two open letters to the organization, objecting to the group “endorsing much” of the Trump regime change gambit.

While WOLA is now supporting the mediation efforts of its biggest benefactor, the Norwegian government, Chomsky and his cohorts argued in a March 5 open letter that WOLA’s “opposition to the offers of mediation by Pope Francis as well as the neutral governments of Mexico and Uruguay” was “dangerous.”

“WOLA even rejects the involvement of the UN in negotiations, which the UN Secretary-General Antonio Guterres has proposed, claiming that a UN role should be limited to overseeing a transition [of power,]” Chomsky and the other intellectuals added, concluding:

It is good that WOLA has distinguished itself … by opposing U.S. military intervention and the manipulation of humanitarian aid for political purposes. But that is not enough. It should unequivocally oppose the whole sordid regime change operation, the violations of international law, and the illegal sanctions that are causing so much suffering.”

WOLA responded to the letter but, according to the intellectuals, failed to address its main points. Moreover, “WOLA Senior Fellow David Smilde wrote in The New York Times that “Countries throughout the region and the United States … should continue to pressure Mr. Maduro by deepening the current sanctions regime.”

While not explicitly recognizing Juan Guaido as president of Venezuela, WOLA takes a consistent line against Nicolas Maduro. “I think what happened with Juan Guaido declaring himself president, or interim president, was in the works for a long time. It was not dictated from the United States,” Smilde assured Democracy Now! listeners, though a number of clues indicate the opposite.

Support for CIA-cutout USAID
WOLA’s hawkish stance on Venezuela may seem surprising for a “human rights” organization, but it is less of a shock for those familiar with WOLA’s history.

Jeremy Bigwood, a journalist who focuses on Latin America, writes:

WOLA also supports [the United States Agency for International Development] ‘democracy promotion.’ In most of Latin America, this has involved the creation, or outright buying, of local NGOs and unions by USAID with the aim to carry out U.S. policy, something that has nothing to do with democracy.”

MintPress News has covered USAID extensively. The CIA cutout is a favorite tool of U.S. regime-change efforts and has even trained the police forces of right-wing Latin American governments in torture techniques.

The organization has also held questionable views on the U.S.’s war on drugs, releasing a long-winded 2005 policy analysis of the U.S. drug war in Latin Ameria in which it advocated for “Rockefeller-style drug laws and private prisons.”

“You’d have to be suicidal”
Anthropologist and Honduras expert Adrienne Pine wrote of WOLA in 2010:

Since I moved to D.C. last June, at least two dozen D.C. grassroots and non-profit activists have confided in me that they’ve been wishing for years that someone would challenge WOLA, but that, as one of them told me, ‘you’d have to be suicidal to do it.’”

That’s because the organization is “so powerful and well-connected that challenging it could seriously jeopardize organizations.”

In the aftermath of the coup d’etat in Honduras — which saw a military operation forcibly remove the leftist president, Manuel Zelaya, from power — WOLA Executive Director Joy Olson suggested that instead of Zelaya living in exile, he could instead be incarcerated inside Honduras.

Pine notes that WOLA founder Joseph Eldridge’s wife, María Otero, served as the United States Under Secretary of State for Democracy and Global Affairs under Hillary Clinton during the coup, and WOLA worked closely with the State Department during that period to legitimize the coup government.

While it has not explicitly supported the faux government of Juan Guaido, WOLA’s stance in support of lethal sanctions against the Venezuelan people — sanctions that violate international law and the basic tenets of human rights — puts the organization once again squarely in the camp of U.S. empire and human-rights violations.

Feature photo | A man stands next to a pile of subsidized food to be distributed under a Maduro government program named “CLAP,” in the Catia district of Caracas, Venezuela, Jan. 31, 2019. An independent U.N. human rights monitor says economic sanctions are compounding a “grave crisis” in Venezuela. Rodrigo Abd | AP