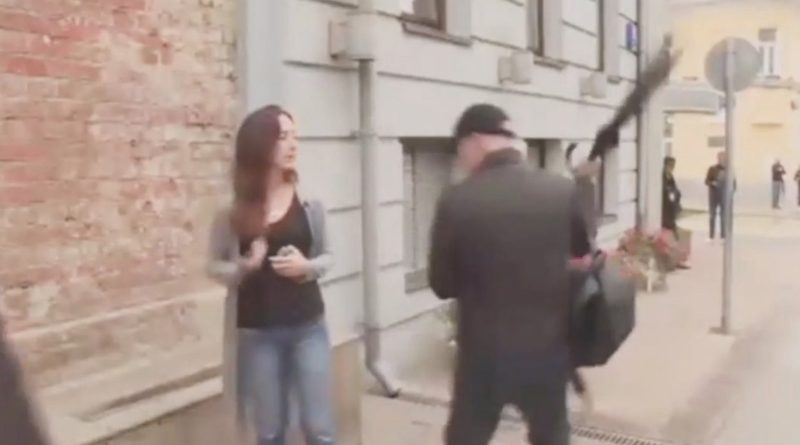 *I’m sure the title in Russian flowed better. I did amend it slightly to note and highlight that I was NOT attacked by a Russian, but likely an American/israeli.

Vadim  Manukyan interviewed me regarding an incident that happened last Saturday. I’ll post my summary (written for a police statement) at the bottom of this post.

Please note: everyone I’ve met in Moscow, in Russia generally, has been extremely kind and helpful. The person who abused me had likely an American accent and Zionist motivations. I’m mainly posting this to both show ugly Zionism. This incident has delayed me a little in finishing off two important projects, but only due to the incident itself and taking the time to file a complaint with police

“Canadian journalist and blogger Eva Karene Bartlett came to Russia for tourism, journalism, including on the Moscow protests, and also to visit Crimea and Donbass.

It was she who owned the famous phrase about Moscow ‘opposition’: “These are the most apathetic of all the protesters in the world that I have seen.”

[*Eva’s note: My emphasis on apathy was NOT any call to violence, it was noting the lack of interest protesters displayed, compared to passionate and vibrant protests I’ve witnessed elsewhere, like Caracas for example.]

The journalist wrote about this on her Facebook page after attending an agreed rally on Sakharov Avenue in Moscow on August 10.

A week later, on August 17, Eva Bartlett was going to cover the next illegal “walks” of the protesters. But Eva’s plans were suddenly hindered by an aggressive stranger who attacked her on a street in the center of Moscow, during an interview. The attacker shouted not only insults, but also anti-Russian slogans. The journalist connects this attack with her independent position on many topical issues of both the Russian and world agendas.

[NOTE: See my FB post about this, including a video of the abuse and another video, from 12 years ago in occupied Palestine, of similar Zionist vitriol.]

Member of the expert council on the development of the information society and the media under the State Duma of the Russian Federation, blogger Vadim Manukyan specifically for the Federal News Agency found out from Eva Bartlett the details of this unpleasant incident.

-VM: On August 17, when you were giving an interview, an aggressive man attacked you and did not stop at verbal abuse: he pushed you and hit you with an umbrella. Who could it be?

-EB:  I can’t say definitively who he is. He seemed to have an American accent and insinuated that he had lived in Tel Aviv. Beyond that, I can’t say.

What I can say is he behaved like a typical Zionist: aggressive and abusive, with very mistaken moral self-righteousness. He defends an entity which was founded on the genocide of Palestinians and which continues to practice genocide against Palestinians.

This man appeared at some point during an interview I was giving to Izvestia tv.  I was making the point that in the Moscow protests I didn’t see police brutality, but that Israel routinely practices brutality against Palestinian protesters, something I’ve numerous times been witness to.

Just after I mentioned that Israel has murdered over 300 Palestinians at Gaza protests in the past over one year, the man flipped out and started verbally abusing me. [ By the way: i experienced personally this Israeli army violence. I lived 3 years in Gaza, I joined protesters to document the violence of the Israeli army. I was fired at with live ammunition MANY times by the Israeli army.]

He wasn’t merely disputing what I was saying , he was in my face screaming at me and wouldn’t back off even when I turned away to diffuse the situation. He continued screaming lies and accusations at me.

Eventually I asked him a number of times whether he had been in Gaza–where I lived for three years. At one point he screamed that President Putin was killing babies, President Assad was killing babies (both nonsense claims) and that I should go to Syria.

I replied I’ve been to Syria 12 times.

Eventually deflecting or ignoring his abuse became pointless so I walked away. He followed, continued screaming abuse at me.

When I decided to film him, he slapped me and then did so again with his umbrella and ran away. He literally ran away. I followed him. He scurried down the street, mission accomplished.

This man was either delusional or a provacateur.

He has no idea what hell Syrians have lived through under terrorist bombings, snipings, kidnappings and terrorist rule.  I have an inkling, given that I’ve made a point of interviewing Syrians around Syria to share their voices–voices Western corporate media actively seeks to mute and disappear.

[Read:  Liberate Idlib and Syria: The Martyred of Mhardeh Speak Through the Ones They’ve Left Behind]

[Read:  UN Feigns Outrage Over Ghouta While Terrorist Rockets Rain Down on Damascus]

[Read:   Order Returns To Western Cities as Syrian Civilians Recount Horrors Of Rebel Rule: In revisiting Madaya and al-Waer after their reclamation by the  Syrian army, it soon became clear from Bartlett’s conversations with  residents, just how distorted the reporting of corporate media about  their fate under “rebel” control had been.]

[Read:  Syria War Diary: What Life Is Like Under ‘Moderate’ Rebel Rule *On life under terrorist rule in eastern Aleppo prior to liberation: starvation, underground prisons, executions…]

If Western media listened to the overwhelming majority of Syrians–particularly Syrians forced to live under terrorist rule, where they were starved, tortured and point blank assassinated or beheaded–then terrorism in Syria might have been eradicated long ago. The misreporting, lies and propaganda of the media on Syria has prolonged the presence of terrorists in areas they occupy. [Related:  ‘They know that we know they are liars, they keep lying’: West’s war propaganda on Ghouta crescendos]

-VM: Did you contact the police after the attack?

-EB:  Following the abusive incident, I re-did the interview I had been interrupted in doing, and after did file a complaint with police.

-VM: Have you encountered similar aggressive behaviour towards you in other countries? WATCH:  The Eye Of Palestine: This is Eva Bartlett, a Canadian justice activist who spent 8 months in the occupied West Bank In 2007, while accompanying Palestinian farmers on their land as they harvested olives, we all came under attack by illegal Jewish colonists slinging large rocks at us. A Palestinian farmer was hit in his head. One of the rocks hit my camera hand. If I had not been filming, that rock would have hit my head. -VM: Did you go after the incident to “walk” the protesters? If so, what is your impression of her?

-EB: Unfortunately, due to the assault and the time it took to file a complaint with the police, I was only able to view some of the individual protesters on Old Arbat street. I didn’t see much other than a number of journalists poised to take photos for their (pre-scripted?) stories on this.