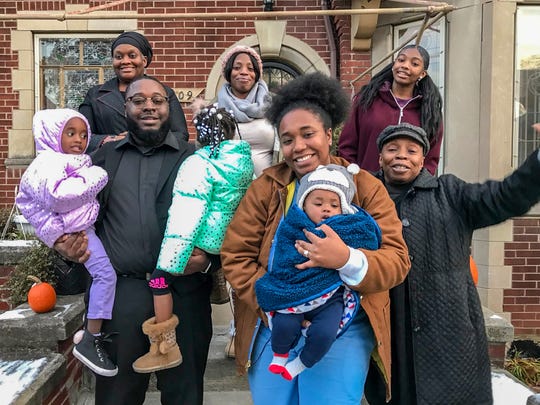 The Michigan Court of Appeals reversed multiple felony convictions Tuesday for a Detroit activist and mother who gave birth while incarcerated last year.

Siwatu-Salama Ra, 26, was convicted on felonious assault and felony firearm charges in 2018 after she waved an unloaded, registered gun to fend off an attack on herself and her family.

Ra pleaded self-defense but was sentenced to two years in prison. She won release on bond in November 2018, after which the Court of Appeals took up her case.

Ra’s case drew national attention and outrage over the conviction of a black woman with no prior offenses who claimed self-defense in a “Stand Your Ground” state.

An environmental and racial justice advocate, Ra is also a registered gun owner with a concealed carry permit, and has said she used the gun to ward off a woman who was trying to hit her and her mother with a car.

She was incarcerated in her third trimester of pregnancy and gave birth to her second child last spring. While her attorneys attempted to have Ra released on bond until her son’s birth, the Wayne County Circuit Court kept her incarcerated through her high-risk pregnancy.

Her attorney, Birmingham-based Wade Fink, argued that Ra’s trial process involved a “parade of errors,” and that the jury had not been properly informed about Ra’s self-defense claim, according to a statement from Fink.

The court that originally tried Ra informed jurors about self-defense with deadly force, but did not instruct the jury about non-deadly force used in self-defense, the Court of Appeals wrote.

This Tuesday, as it reversed Ra’s convictions, the Michigan Court of Appeals stated that “the trial court’s failure to give the jury instruction regarding the use of non-deadly force in self-defense was erroneous.”

The court decided it is “more probable than not that the lack of proper instruction affected the outcome of the case.”

“The Michigan Court of Appeals again showed itself to be the thoughtful, deliberative judiciary that citizens can rely upon to do justice.” Fink said in a statement. “This is huge victory for the criminal justice system. Siwatu acted in self-defense and if this case is brought again, we intend to prove it — this time in a fair trial where Siwatu is permitted to present a defense.”

Ra’s case now rests with prosecutors, who can decide to appeal the decision to the Michigan Supreme Court, pursue another trial or drop the case.

Featured image: Siwatu-Salama Ra holds her son Zakai, who she gave birth to while incarcerated at Huron Valley Women’s Correctional Facility, surrounded by family after being released on bond on November 14, 2018. Ra, 26, was convicted on felonious assault and felony firearm charges in 2018 and had the two-year sentence overturned by the Michigan Court of Appeals. (Photo: Kimberly P. Mitchell)