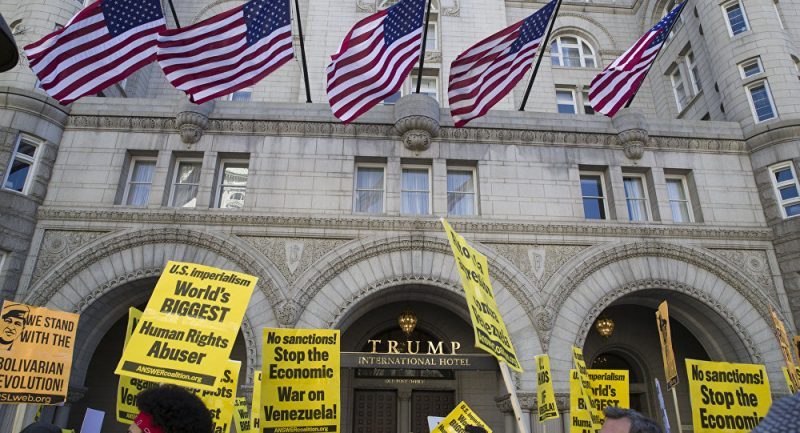 Caracas welcomes US activists’ attempts to prevent the Venezuelan embassy in Washington from being taken over by opposition leader Juan Guaido’s representatives, Venezuelan Foreign Affairs Minister Jorge Arreaza said during a press briefing.

“[Social groups] have proposed themselves for legal actions to protect the Venezuelan properties, they are assisting in this regard, and their assistance is very much welcomed,” Arreaza said on Thursday.

Arreaza said that the US decision to expel Venezuelan diplomats constitutes a violation of the Vienna Convention on Diplomatic Relations, adding that his country should protect its diplomatic property.

The so-called deadline set by Washington for Venezuelan diplomats to leave the United States expired on 24 April.

Earlier the US State Department ordered Venezuelan diplomats to leave the embassy by midnight local time on Wednesday (04:00 a.m. GMT on Thursday). The activists have not been ordered to leave yet, although US authorities and Guaido’s representatives are expected to take over at any time.

For the last couple of weeks, with the permission of the Venezuelan Foreign Ministry, the Embassy Protection Collective activist group has been living in the embassy to prevent Guaido representatives from taking it over. The activists have been holding various events like lectures and speeches inside.’

US police gather outside #Venezuela Embassy in Washington ahead of the so-called deadline when the diplomatic building is expected to be taken over by State Dept. and Guaido representatives. Activists who’ve been living inside the embassy are set to protect it from the takeover pic.twitter.com/RXfp76ChDI

More Secret Service members came to #Venezuela Embassy in Washington. Law enforcement say they were called about complaints that the embassy has been vandalized. Meanwhile, activists are standing outside the embassy and by its front door pic.twitter.com/Xi9AwiJJSP

On Tuesday, Kevin Zeese, a member of the Embassy Protection Collective activist group, told Sputnik that his group was willing to risk arrest to protect the Venezuelan Embassy in Washington from being taken over by officials from Guaido’s “fake” government. Zeese said it was important to note that Maduro’s government is the only one recognized by the UN.

Washington intensified sanctions against Venezuela after the US-backed Guaido illegally declared himself interim president in January. UN special rapporteurs and human rights lawyers have argued that the US sanctions violate international law and may constitute crimes against humanity.

Some 40,000 Venezuelans have died in less than two years as a result of illegal US sanctions, a study co-authored by world-renowned economist Jeffrey Sachs revealed on Thursday.

Maduro has accused the United States of trying to orchestrate a coup in order to install Guaido as a US puppet.

Russia, Bolivia, China, Cuba, Turkey , South Africa, Iran and a number of other countries have voiced their support for Maduro as the only legitimate president of Venezuela. Today alone Chancellor Arreaza had a meeting in UN with the Group in Defense of the UN Charter, Multilateralism and Peace with more than 60 Ambassadors for the same number of countries participating in it.