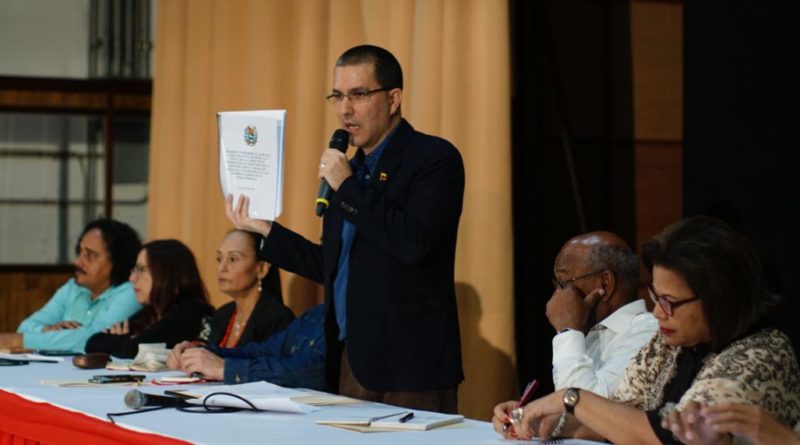 Venezuelan Foreign Minister Jorge Arreaza on Tuesday rejected the coercive measures or illegal “sanctions” that the US government announced hours before against the Swiss company Rosneft Trading, a subsidiary of the Russian state oil company Rosneft, for its links with Venezuela.

During a speech at the Bolivarian Congress of the Peoples, Arreaza said that the company works with PDVSA in the commercialization of Venezuelan oil. “The measure is against the Venezuelan people; it is against the workers of PDVSA; it is against the possibility that we produce and sell more oil, against our right to have more income for housing, health, infrastructure, food and life.”

He pointed out that PDVSA workers, as did those of Conviasa last week, “already mobilized to defend their industry, to lift their chins and produce more than ever, despite the measures and actions taken by the US.”

He denounced the US coercive measures for violating principles in which the United States supposedly believes, such as free trade and free enterprise, “to harm Russian companies and for American companies to take up places in the market and keep profits,” affecting oil production and commercialization in Venezuela.

“It’s a perverse circle of Washington’s to affect the Venezuelan people,” he explained.

“The Treasury Department has become the economic Pentagon, that is, the Ministry of War through the economy, because unilateral coercive measures end up being weapons of mass destruction. They are like bombs that fall on the villages!” said Arreaza.

He referred to the nationwide blackouts that occurred last year in Venezuela, of which he stressed that not only was there a cyber attack against the electrical installations, but the foreign companies responsible for helping to recover the system did not. “Where is the service that General Electric or Siemens should immediately have provided as a company, to help recover the system that uses its technology, and that they even have contractual warranty and maintenance commitments with in our industry? No. They cannot come to Venezuela, because then they punish us, they sanction us. And these are the consequences.”

He stressed that this type of use of force is prohibited by the Charter of the United Nations, which also prohibits threats of the use of force, which have constantly been applied against Venezuela, particularly since August 2017.

He also explained that illegal sanctions are widespread and affect the entire people of Venezuela, including the civilian population. They are systematic, have been applied weekly and almost daily in recent times. In addition, they are produced by a State or an organization. For these reasons, these sanctions do qualify as crimes against humanity, according to the Venezuelan Foreign Minister.

Earlier, Arreaza said on his Twitter account that “the unilateral coercive measures of the United States against Rosneft Trading, are directed against our oil industry, its workers and the Venezuelan economy. They continue to attack the people of Venezuela, trying to generate suffering and difficulties.

He added that these arbitrary measures against the Russian company Rosneft Trading “violate the right to free trade and free enterprise. We will add these unilateral actions to the criminal complaint we have introduced against US officials before the International Criminal Court.

He also pointed out that the Prosecutor of the International Criminal Court “must identify not only those responsible for issuing these perverse measures in Washington, but also those confessed indolents who request and promote them in Venezuela. Venezuelan justice will take the appropriate measures.”