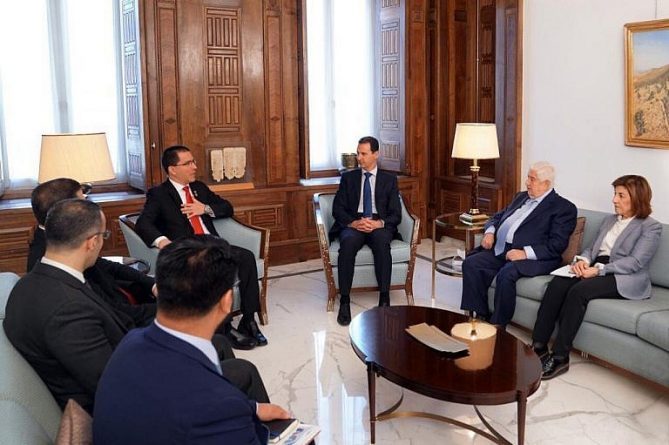 “It is the same enemy, with the same interests and somehow it is also the same people resisting imperialism,” said Thursday the Minister for Foreign Affairs, Jorge Arreaza , on the experience of Syria in its war against terrorism.

From Damascus , capital of Syria, the chancellor offered a press conference accompanied by his counterpart from that Arab nation, Wallid Al Moallem, in which he exposed the similarities of the attacks on the sovereignty of both countries by the United States government and its allies.

RELATED CONTENT: The Other Side of the “White Helmets” in the Syrian Conflict

“Mercenaries from all over the world came to Syria and the people have been winning the battle against terrorism,” Arreaza said.

He argued that in the case of Venezuela, allies of imperialism have also emerged in the region, “but we must recognize that even the most bitter adversaries (of Venezuela) allege being against a military aggression in the country”.

Arreaza recalled that Washington constantly repeats that it does not rule out a military aggression against Venezuela, “they say it every day, that when it comes to Venezuela all the options are on the table”.

“We do not know what that kind of table is, where there is no option of dialogue, respect for international law or respect for the popular will and Constitution of Venezuela; they want to attack Venezuela, seize the oil and other riches”, he said.

The head of the Venezuelan diplomacy reiterated the position of Caracas to defend multilateralism as the main way to defeat the unilateralism of the US government and defend international law and peace.

“It is a great honor to be received by the brother President of Syria, Bashar Al-Assad. How much experience, wisdom and advice for the resistance, for victory and for peace…”, said the head of the MFA.

“We hope that the action of countries committed to respecting international law will effectively produce a change in the foreign policy of the United States,” Arreaza said.

However, he pointed out that even if these actions do not impact the administration of Donald Trump, they can do so in the US Congress with the US people putting pressure to stop a war against Venezuela or another country in the world.

“Commander Chavez, to protect his people, located in Russia an ally for the supply of equipment for defense of our Venezuelan territory, never for offensive systems”, he said.

“The reaction of the US government is very striking in relation to this Russian-Venezuelan cooperation because they have wanted to impose their Monroe doctrine in the region since 1823 to dominate the whole continent”, said minister Arreaza.