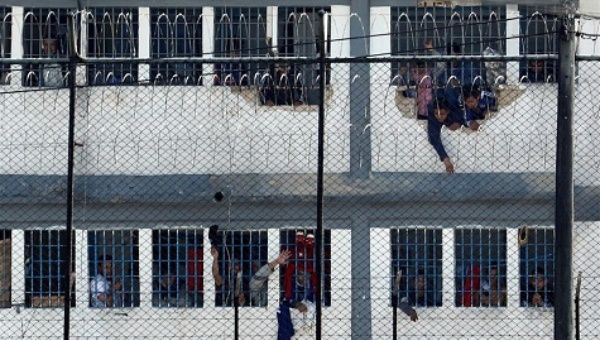 As the coronavirus pandemic is starting to spread across Latin America’s massively overcrowded prisons, putting the lives of tens of thousands at risk, riots have been reported in almost all the region’s countries as inmates say their fundamental rights to safety and protection are being violated.

A riot was reported Monday in the Castro Castro prison in Peru’s capital, Lima, resulting in a fire and the death of three people inside the prison.

The number of people incarcerated in Peru is close to 91,000, according to figures last updated two years ago. Of the country’s 68 severely overcrowded prisons, 23 hold more than 1,200 people, although only eight have such a capacity.

Another disturbance was also reported at the Ancon II prison located on the outskirts of Lima. Inmates rioted to demand medicine and food. They said they are eating only twice a day and are no longer receiving food from their families since visits are restricted, according to local media.

In another prison, the Huamancaca Chico prison in the department of Junin, located in the center of the country, prisoners were asking for COVID-19 tests after two of their fellow inmates died. Police responded by shooting tear-gas canisters.

Peru’s prision population is so far the worst-hit in the continent with 613 cases and at least 13 deaths.

In Chile, authorities have confirmed Monday more than 300 COVID-19 cases in the Puente Alto prison in downtown Santiago both among inmates and prison staff. The facility’s 1,100 prisoners are terrified and have few means to protect themselves as social distancing is impossible in cell blocks.

In Colombia, where prison overcrowding amounts to 51 percent, 213 people contracted the deadly virus and three died so far.

Human rights groups have been warning of the disastrous effects that the COVID-19 pandemic would have on jailed people in that South American nation, which is regularly accused of violating its prisoner’s fundamental rights.

In addition, since the pandemic started, there were at least 23 deaths in prison riots in Colombia not directly due to the virus itself but out of fear of it.

Monday Argentina’s President Alberto Fernandez endorsed the house detention solution for common law prisoners after tensions mounted over the past weeks in the country’s prisons with several riots and confrontations. Prisoners outside of jails would be controlled with electronic devices, the president said.

“Prisons are a very risky place of human concentration. Contagion and contamination can occur very easily,” he stressed.

In El Salvador, authorities over the weekend crammed prisoners together in prison yards while searching their cells, throwing away distancing measures. El Salvador’s President Nayib Bukele ordered the security crackdown after more than 20 people were killed Friday and reports suggested the orders came from imprisoned gang leaders.

About 1.5 million inmates are detained in Latin America’s facilities. Because of corruption, intimidation, and inadequate guard staffing, the prisons are often quasi-ruled by prisoners themselves while low budgets also create perfect conditions for the virus to spread. There is often little soap and water.

Throughout the region, the prisoners’ demands come down to simply being properly protected from the virus.