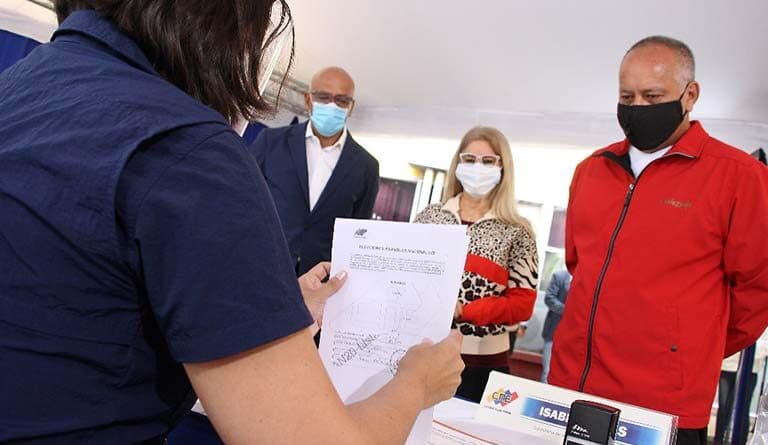 This Thursday, the candidates of the Great Patriotic Pole (GPP) delivered in the headquarters of the National Electoral Council (CNE) the list of candidates running for a seat in the Venezuelan National Assembly (AN) for the parliamentary elections scheduled for December 6.

From the headquarters of the CNE in Caracas, leaders such as the first vice president of the United Socialist Party of Venezuela (Psuv), Diosdado Cabello, the socialist leader and now candidate, Jorge Rodríguez, and the first lady, Cilia Flores, were present to formalize the enrollment in front of the CNE, the body that will govern these elections to elect a new AN.

After fulfilling all the requirements demanded by the electoral law, the political parties that make up the GPP — some 9 political organizations — formalized their unity for the rescue of the AN, before Isabel Rojas, director of the regional board in the city of Caracas.

RELATED CONTENT: Stalin Gonzalez “Pre-Resigned” From his Party to Participate in Parliamentary Elections

In this context, the candidate for deputy, Jorge Rodríguez, said: “It has been the most disastrous National Assembly in the political history of the country (…).” At the same time, he urged all the political forces that support the revolutionary option to carry the message of change in the National Assembly.

“We are going to stop so much betrayal, we will stop as much crime as those that have been perpetrated by those people on the right at the command of the National Assembly,” emphasized Jorge Rodríguez, as well as referring to the fact that the Venezuelan deputies are not elected by Donald Trump, Jair Bolsonaro or Iván Duque, “each Venezuelan elects them through the vote.”

He added that no political group of the ilk of Juan Guaidó’s had been seen, in such a short time, to have enriched itself in the way that it has enriched itself. “Guaido’s brother and his family have a luxurious life in the city of Miami.”

“We Venezuelans are going to tell the world that few democracies have a system like Venezuela’s,” he said.

For her part, Cilia Flores, reiterated the unity is monolithic in its diversity, “we are united as a single block to present our candidacies,” she said. The first lady pointed out that the time has come to rescue the National Assembly in a perfect alliance.

“We are committed to putting a new National Assembly at the service of the people,” she said, arguing that in Venezuela the people decide and elect, as well as their governors and mayors, their deputies.

In this line of action, PSUV’s first vice president, Diosdado Cabello, sent a message of optimism that shows an absolutely unitary proposal to face a new electoral round almost 22 years since the arrival of former President Chávez as a political force.

“We have made a great effort for that unity, the right wing has taken advantage of every time that within the Revolution there has been some kind of disagreement, the call is for conscience,” Cabello urged.

However, he explained that this right “is very bad, but that is their problem. We must guarantee monolithic unity.”

Compliance with electoral results
The forces grouped in the GPP announced that they signed a document to acknowledge any results that may occur once the results of December 6 are known.

“We are signing to comply with the rules imposed by the electoral body, because it is very easy to shout fraud and call a coup,” argued Cabello.

All the political parties that assumed the democratic path and that will participate in the elections will have until tomorrow to register their candidates, remembering that the CNE extended this period.

Regarding the measures for the Covid-19, the authorities of the electoral body installed a medical team that is stationed at the entrance of the CNE as part of the biosafety regulations aimed at preventing the spread of the coronavirus, as well as in the different regional headquarters.