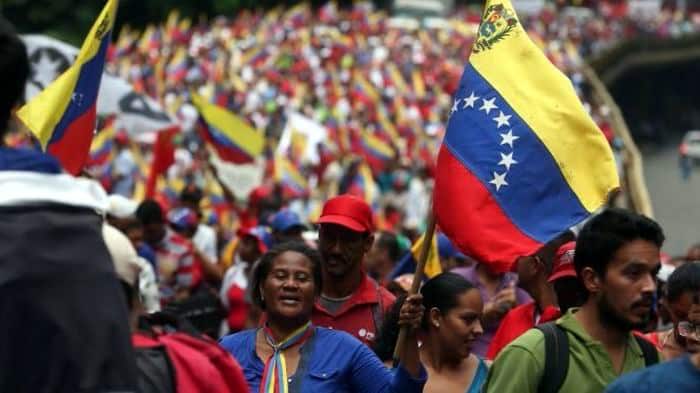 The new National Assembly in Venezuela will have a Chavista majority. According to the preliminary numbers, 31% of the electoral roll voted, in a context marked by economic crisis, calls for non-participation, and an international deployment to sabotage the election.

Chavismo won a majority in the National Assembly in the 6D elections (December 6). The results were long awaited, until the early hours of the morning, when the president of the National Electoral Council (CNE), Indira Alfonzo, announced the numbers, with 82.35% of the votes counted.

The opposition lists, on the other hand, reached low percentages. The alliance formed by the parties Acción Democrática, Copei, Cambiemos, Avanzada Progresista, and El Cambio obtained 17.95% with 944,665 votes, and the alliance of the forces Venezuela Unida, Primero Venezuela, and Voluntad Popular Activistas obtained 4.19% with 220,502 votes. The Communist Party of Venezuela obtained 2.73% with 143,917 votes.

Once the numbers were known, a televised communication took place between the Dario Viva Campaign Command, with the presence of the PSUV leadership, including Diosdado Cabello and Jorge Rodriguez, with President Nicolas Maduro, together with his wife Cilia Flores and his son Nicolas Maduro Guerras, both elected for the new NA.

“We have a new National Assembly elected by the vote of the people, a great victory for democracy, for the Constitution,” Maduro affirmed, congratulating participants for an electoral day without incidents, in a complex context, due to economic and political factors, both national and international.

What does Juan Guaidó say?

Since the afternoon, the right wing, which had called for a boycott of the elections, announced that abstention had been over 80%, an unsubstantiated statement. The objective was to install the message in the media and then, once the results were known, to denounce a fraud on the part of the CNE.

The same U.S. Secretary of State, Mike Pompeo, tweeted during the afternoon of the elections that there had been fraud, ratifying the position repeated by the U.S. government which, from zero hour, carried out a deployment of operations to sabotage the legislative contest.

Guaidó’s objective was to affirm that the election had no support as a result of his call for abstention and that, consequently, both the government and the opposition that participated were defeated. Thus, according to this message, he and those who remain within this strategy were strengthened.

However, there was neither an 80% abstention, nor was the abstention the result of a call from Guaidó and Pompeo, but rather the result of a series of variables, such as, for example, the situation of prolonged economic difficulties in the framework of an economic blockade that, during 2020, took on even greater dimensions within the “maximum pressure” deployed from the United States.

The economic variable, with its consequent impact on discontent and exhaustion, was not the only explanation for the participation rate. Another reason can be found in a complex political conflict that generated erosion among the population, where some sectors no longer feel represented in any of the existing political options.

What can be concluded?

One thing is certain: as of January 5th there will be a new National Assembly with a Chavismo majority, which represents a victory for the forces united in the GPP, and in particular for the PSUV.

Obtaining that majority means that the legislative defeat of 2015 has been reversed, the year in which the majority was obtained by the opposition, which translated into an escalation of the attempts to overthrow the government, centrally deployed from the NA.

The existence of a new Legislative Power, with a Chavista majority and opposing parliamentary fractions, will be a new reality in national politics as of 2021, a year that will again be marked by elections, this time for mayors and governors.

Another conclusion is undeniable: Guaidó and the forces that continue within this strategy will remain outside of the Legislative Power. What will those who recognize his interim presidency do at the international level? Will they maintain that he continues to be president in charge? In this respect, the former president of Spain, José Luis Zapatero (2004-2011), who came to Venezuela during the elections, called for reflection by the European Union.

“The diplomacy of the European Union is based on the peaceful solution of conflicts, on the respect for procedures, and I wish that the European Union makes a reflection after these elections, to evaluate what the policy of sanctions or the policy of non-recognition has given us, which may lead us to the greatest absurdity that the history of international law has known”, said the former Spanish leader.

Guaidó’s formula for seeking legitimacy to continue leading the “interim presidency” despite no longer being in the NA will be the so-called “popular consultation,” which is to be conducted through a telephone application until December 12, when, according to Guaidó, there will be a face-to-face vote.

The objective of the consultation is to be able to affirm later, particularly at the international level, that he was supported in order to remain at the head of the imaginary Presidency, now completely reduced to the realm of the virtual. Capriles Radonski, who was first going to participate in the legislative elections, and who finally backed down on the basis of the European Union’s decision, described the initiative of the “consultation” as a “call for a mobilization without tangible solutions”.

A central question remains to be answered: what will the new Administration of future U.S. President Joe Biden do? Will it modify tactics in its attempt to change the government in Venezuela? Will it maintain the blockade or be willing to relax it within the framework of dialogue and negotiation?

The issue is central to projecting the evolution of the conflict and, in particular, the economic situation. The main point of Chavism’s demands in a dialogue is the lifting of economic measures that asphyxiate the macro economy and violently impact on daily life.

During the debates between candidates to the National Assembly, one of the participants, Javier Bertucci, affirmed that, from the Legislative Power, possible agreements could be made to undertake a process of dialogue with Washington, with consensual demands to address the necessary lifting of the blockade, which does not have support within Venezuela.

Advancing in resolutions of the economic situation will be one of the main and urgent points to be addressed by the National Assembly, both, for example, in the order of salaries, as well as public services, such as water, light, gas, as well as gasoline. What will the Legislative be able to do? What will it do? These are some of the questions that will be answered in the coming months.

Venezuela managed to conduct an election day in a context of sabotage by a sector of the opposition, foreign governments, large media, an economic blockade, which in itself is a victory for the democratic future of the country.