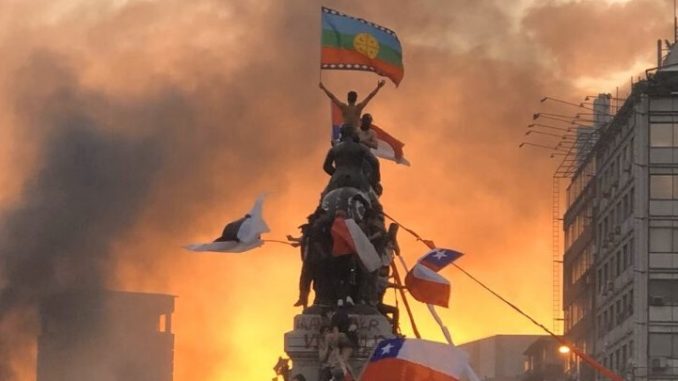 “Neoliberalism was born in Chile and will die in Chile” has become a rallying cry for the movement. Yet few in the West are aware of the country’s tumultuous history as an experimental laboratory for free market economics imposed on Chile by the United States.

Santiago, Chile — “We are at war with a powerful, relentless enemy that respects nothing nor anyone” thundered Chilean President Sebastian Piñera during a speech to the nation, deliberately echoing the infamous catchphrase of fascist military dictator Augusto Pinochet.

The “enemy” he was referencing were Chilean citizens, more than one million of them taking to the streets Friday afternoon in a revolt against the neoliberal system Piñera was implementing against their will, demanding his resignation.

The spark for the revolt that started October 14 was a 30-Peso increase to the subway fare in Santiago, the country’s capital and by far its largest and most important city. But demonstrations quickly escalated into a general protest against the decades of neoliberal economic policies carried out by successive governments that increased the cost of living and marginalized and disenfranchised the population, leading to greater social and economic inequality. As a popular slogan of the protest goes: “It’s not about 30 pesos; it’s about 30 years.”

The government’s response has been brutal. The President has declared a state of emergency across much of the country and ordered tanks through Santiago to break the movement in images that would be on endless repeat in our media if Piñera were not such a loyal ally of Washington. The death toll currently stands at 18, with security forces arresting over 5,400 people in the first four days alone, well over double the number arrested in Hong Kong after six months of unrest. This is one reason why many in Chile see the threat to their country coming not from the people in the streets, but from the Piñera administration itself.

While most of the images we see emanating from Chile are from Santiago, the protests have spread across the country, including to the sleepy southern regions where MintPress News staff writer Whitney Webb lives and reports from. Speaking earlier today she emphasized the regional differences in the protests:

“In Valdivia there have been a lot of riots and looting recently but a couple hours to its north, in Temuco, protests lately have been peaceful with whole families participating (kids and babies included) in marches against austerity and the AFP system, among other hot button issues,” she said, referencing the hated privatized pension program.

“I have lived in the Araucania region for five years and have never seen protests (peaceful or otherwise) on this scale ever. From what I’ve experienced here and from what I’ve seen of Santiago, I think people are by and large fed up, whether on the left or the right, with the crony capitalism and corruption that has enriched people just like Piñera and those that surround him.”

“Neoliberalism was born in Chile and will die in Chile” pic.twitter.com/Gaa90j8zdH

The protesters see themselves as fighting to end the neoliberal model imposed on them since 1973.

“Neoliberalism was born in Chile and will die in Chile” has become a rallying cry for the movement. Yet few in the West are aware of the country’s tumultuous history as an experimental laboratory for free-market economics imposed on Chile by the United States.

A Warning from History
“I’m not at all surprised at what’s happening in Chile,” remarked Noam Chomsky. “They are the completely predictable consequence of the neoliberal assault on the population for forty years.”

After managing to overthrow the democratically-elected Marxist President Salvador Allende in a 1973 coup, the United States had an opportunity to construct a new society based on neoliberal principles, with the help of the new fascist dictator, Augusto Pinochet. The country became the “empire’s workshop,” where American economists had free rein to construct the perfect society along market principles.

The problem was that the population did not want everything privatized, sold off to foreign corporations, for workers’ rights to be removed and the social safety net to be destroyed. Therefore, the population had to be terrorized into submission first. At least 3,000 people were killed, and tens of thousands brutally tortured by the Pinochet dictatorship, which remained in power until 1990. Two hundred thousand managed to flee the country.

The economy immediately collapsed, as did living conditions for ordinary people. It continued to underperform and proved extraordinarily volatile throughout the 70s and 80s. However, the upper class prospered, and many foreign investors became incredibly rich, explaining perhaps why the Washington Post described the country as an “economic miracle” and a “model” for others to follow. Chile became one of the most unequal countries in the world; something that scholars of neoliberalism such as David Harvey, Gerard Duménil and Dominique Levy argue was precisely the point.

While the dictatorship is formally over, Pinochet negotiated a transition from a position of power, leaving many of his henchmen in high office and those handpicked and fast-tracked under the fascist dictatorship now in top positions in the police, army, courts and the media. Furthermore, the neoliberal economic system and Pinochet’s constitution remained, as did the people’s fear of the government and what it was capable of.

Two of those tortured in concentration camps were the parents of journalist and documentary maker Pablo Navarrete, founder and co-editor of Alborada Magazine. Pablo spoke to MintPress News about the protests threatening to upend the social order.

“Chile is living through an incredible moment,” Navarrete said.

The neoliberal model forced on Chilean society with such brutality under Pinochet from 1973 onwards and which served as a laboratory for the right in places such as the UK and US has been dealt a mortal blow.”

Despite the “vicious levels of repression” by security forces, Navarrete claimed that his country has reached a “tipping point” where “Chileans have lost their fear” of the state. What is the way forward now? Can the protesters topple a president, or will the replacement of a figurehead without meaningful structural change achieve anything?

“It’s now key that we support the Chilean people’s call for the creation of a Constituent Assembly, so they can create a new, democratic constitution, and discard the current one that was imposed under Pinochet,” he advised.

It is an outrage that nearly 30 years since the end of the dictatorship, Chile should still have this Pinochet-era constitution in place.”

Media Distortion
Mainstream media, like CNN, NBC News and the Guardian, have shown far less interest in, or solidarity with, Chile than Hong Kong, framing the former not as protests, but as “riots,” a word never used to describe the Hong Kong protests.

Webb criticized the press for their warped coverage: “The media in the West and also in Chile has focused largely on the looting and rioting (that does occur) and is claiming that ALL the protests are this way, and this is completely false” she told Mint Press.

Navarrete agreed, recommending that, “Those wanting to keep abreast of events in Chile in the English-language will, as with most other issues, have to turn to independent media for balance, as there has been a relative absence of mainstream media coverage regarding the scale of the uprising and the ferocity of the government’s repression.”

There has been comparatively little coverage of the massive movement in Chile. And much of it obscures what the protests are for, and crucially, what they are. Neoliberalism is largely absent in mainstream reporting of the protests; there has been no mention of the word or its derivatives in any reporting on Chile from CNN, MSNBC or Fox News, for example. Meanwhile Slate amended the title of an article originally titled “Chile’s People Have Had Enough of Neoliberalism” so the headline read simply “Chile’s People Have Had Enough”, removing all mention of the word from their reporting

The real driver in all this, according to a Wall Street Journal opinion piece, was not crony capitalism, but the socialist governments of Cuba and Venezuela, who are “playing a key role” in directing the movement. Piñera, it explains, was “forced to declare a state of emergency” to “protect property and life” from the “left-wing terrorists savaging Santiago and cities around the country.” Only a fool would believe these protests are organic, it explains. After all, “market policies have been successful” in Chile, so why would anyone be unhappy? The United States, however, sees a Russian hand directing the protest. Trump-appointed Assistant Secretary for the Bureau of Western Hemisphere Affairs Michael Kozak claimed that the Kremlin has penetrated Chilean social networks and was circulating fake news in order to inflame tensions.

The US govt is blaming Russia for the protests in Chile, what a f–king joke.

It’s not the Russians fault that Chileans are tired of living in a US client state https://t.co/TMKGkxquxR

Meanwhile Human Rights Watch, always quick to condemn leftist Latin American governments like Bolivia, Venezuela or Nicaragua for their transgressions, called for the swift prosecution…of the protestors. Its Director of the Americas, José Miguel Vivanco, stating, “Prosecutors should also carry out prompt, thorough, and impartial investigations into serious crimes committed by demonstrators in recent days.” The full-scale crackdown and the suspension of the most basic civil liberties merely had Vivanco “worried” that “there has been an excess of force” from the government.

The Future of Chile
Piñera has already gutted his cabinet in an attempt to placate the public. But Webb suspects the protesters will not be silenced so easily.

“He is mistaken to think this will die down. I think at this point the only way he could quiet it would be to do something more drastic in terms of policy, like end the AFP program” she said. “I doubt he will though, since his brother was a key factor in putting that program in place and it would be a blow to the great neoliberal “experiment” that was foisted on Chile during the Pinochet era.”

Despite the elite voices in the West working to undermine the emerging anti-austerity movement, Navarrete is hopeful:

It’s clear that Chileans have had enough and are demanding profound democratic changes. Chile has awoken and I’m excited about the country’s future.”

Corporate media is unlikely to give the protestors a fair hearing, given what their demands are and what they are struggling against, but that should not surprise or disappoint them. Those who witnessed how Occupy Wall Street, the anti-war demonstrations, the Global Climate Strike or the Sanders campaign were treated by the press know how it works. After all, as the jazz poet Gil Scott Heron told us, “The Revolution Will Not Be Televised.”