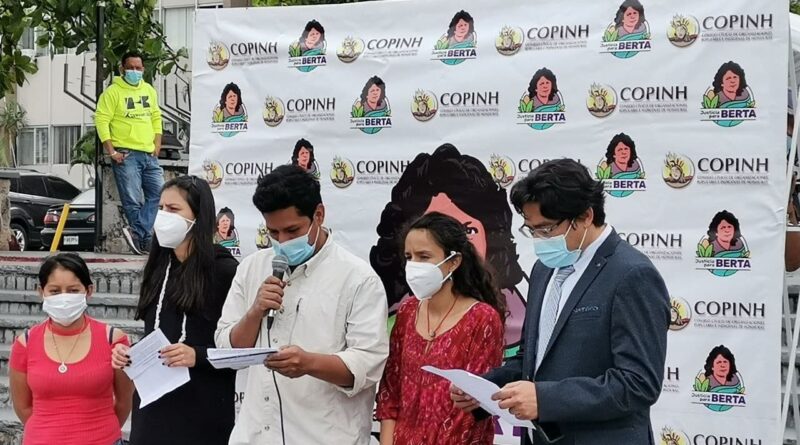 On Tuesday, 61 months after the crime, Roberto David Castillo Mejía has appeared in court, accused of being a mastermind of the assassination of Berta Cáceres. Castillo was president of the private energy company Desarollos Energéticos SA (DESA), holders of the concession for exploitation of the Gualcarque River, and developers of the Agua Zarca hydroelectric project, against which Berta Cáceres, the Lenca Indigenous leader fought for years, together with the Civic Council of Popular and Indigenous Organizations of Honduras (COPINH).

For Berta’s family and for COPINH this trial is not only crucial for showing Castillo’s responsibility for this crime, but, also, in order to put in evidence the involvement of others who are responsible and who, up to now, have not been arrested or tried.

In a communique, COPINH and the family of Berta Cáceres and the legal team stated that the trial of Castillo is only the first stage of the process of judgement of all the persons involved in the crime.

“The existing evidence against Mr David Castillo Mejía has been in the hands of the justice administration system for 5 years. There are overwhelming and irrefutable proofs of his participation as co-mastermind, which is to say as the link between those who carried out the crime and the the executives of the DESA energy company – the Atala Zablah family,” said Victor Fernandez, a member of the legal team.

“We, along with the family and the COPINH, are ready for this trial to start, proceed, and conclude. In this way, we can move on to the next phase of the matter of Berta Cáceres.” According to the ex-prosecutor, the prosecution of the other planners of the crime, who, like Castillo, have been clearly identified, should be a priority. “We hope that the justice system has the independence, the determination, and the courage to investigate them, try them and find them guilty. This is another of the challenges we must take on,” Fernandez went on.

The Financial System Is Also Guilty
There is another element of enormous importance that COPINH and the legal team emphasize in their reports. “None of what happened to Berta would have been possible if the national and international financial system had not financed the Agua Zarca project. Beyond that, many of the crimes that occur in our country would not have occurred if the national, international, and multi-lateral financial system did not continue to support this type of project.”

The lawyer added that, “Justice in the Berta Cácres cause involves making it clearly understood the major role of the financial systems, the national and international banks and all the entire system claiming to promote development. The financing of the Agua Zarca project unleashed a chain of violence against the Lenca People, created a wave of corruption and set up a truly illegal association involved in criminal conspiracy in this country. In this sense, another challenge that we are faced with in upholding the cause of Berta Cáceres is precisely to put on trial the financial system as a whole, along with those public officials who participated, by action or by omission, in this crime.”

One More Step
In December 2019, those who carried out the crime were sentenced to between 30 and 50 years in prison; among these were ex-directors and members of the DESA energy company’s security force, as well as ex-soldiers and active-duty military men. Now the next task is to prosecute those who planned and ordered the crime, as well as the financial system, and to revoke the corrupt and disastrous development plans for the Gualcarque River, which, five years after the assassination of Berta Cáceres, still continues in effect.

“Our objective is genuine comprehensive justice, which implies truth, reparations, and no repetition or recurrence of the crimes that were committed here,” Fernandez concluded.