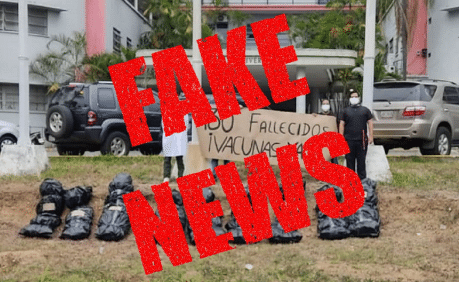 Groups connected to healthcare personnel from Venezuela’s extreme right staged another attempt at fake news this Tuesday, April 6, mounting a demonstration with black bags tied up to appear as human corpses at the Hospital Clínico Universitario in Caracas.

Morbidly presenting the supposed corpses, the anti-Chavista healthcare personnel tried to capitalize on the anxiety of Venezuela’s population in the midst of a second COVID-19 wave to rally people against the government, but many considered the objective was not accomplished.

The aforementioned healthcare center is one of those that provides specialized care to patients infected with COVID-19. Intensive care spaces and treatment has been enabled and equipped in this regard.

The promoters of the “demonstration” were identified as students of the Faculty of Medicine in the Central University of Venezuela (UCV) on whose campus the hospital operates. The group spoke through social media networks. Their spokesmen asserted that the reason for the “protest” was the alleged death of 430 healthcare professionals due to the pandemic.

However, another group of people (apparently workers and managers of the hospital morgue), decided to reveal that the packages, wrapped as if they were dead bodies, were actually stuffed with paper.

Commitment to health
Venezuela is one of the Latin American countries with the best containment of the COVID-19 virus, despite currently going through the second wave of infections, with the arrival of the “Bolsonaro” variant of the coronavirus, as President Maduro calls it.

On the other hand, the Chavista government constantly maneuvers to overcome the restrictions of the blockade imposed by the White House and Europe, against the financial and productive system of the Caribbean nation. As a result, it has managed to equip medical care centers with the support of friendly countries such as Russia, China, Cuba and Turkey, among others.

In this regard, the authorities have announced and applied special biosecurity measures similar to those implemented at the beginning of the pandemic, exactly one year ago. “We are on high alert because we have two variants that came from Brazil,” the Venezuelan president reiterated.

Similarly, the country remains in a constant battle against the generation of fake news that occurs when international media take images such as those published at this hospital and launch campaigns to disparage the actions of the state, demoralize the people, and generate anxiety.