Colombian criminal gangs have tried to bring vice and crimes against humanity along a 2,219-km border territory with Venezuela, one of the most dynamic in Latin America and the Caribbean. This has had consequences for human lives, security, public order and political stability. This was stated by Venezuelan Affairs Foreign Minister Jorge Arreaza, who reiterated that Venezuela will continue to denounce the installation of antipersonnel mines on its territory by Colombian terrorist cells.

This Tuesday, April 6, from the Miraflores Palace in Caracas, Arreaza recalled the request made by Venezuela to the United Nations (UN) for immediate assistance to “deactivate the minefields” that have left havoc in territories and have affected residents along the border on both the Venezuelan and Colombian sides. People have “been left even without their lower limbs by antipersonnel mines. We do not want that in Venezuela.” 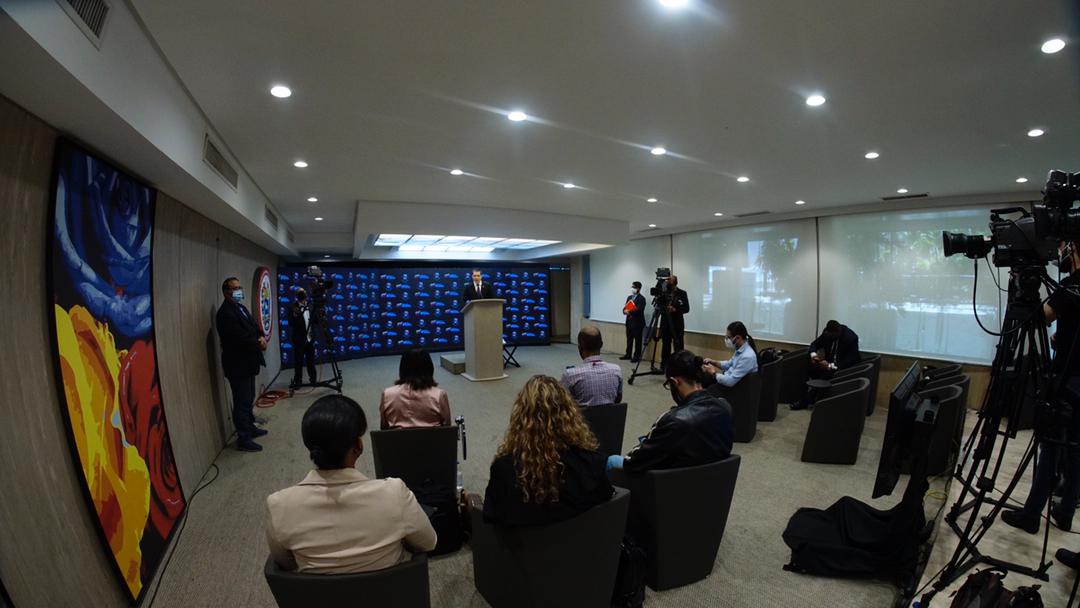 Mine statistics
With respect to this problem, the Ministry of Foreign Affairs presented a report detailing statistics on the negative effects that arise after the explosion of these antipersonnel mines in Colombia.

In that country alone, according to the International Committee of the Red Cross, in 2020, explosive devices caused 389 victims. 241 of these were victims of antipersonnel mines and explosive remnants of war, and 148 by devices launched or by controlled detonation. Of this number, 226 were adult civilians and 36 children, not including 152 members of the public security forces and 11 from irregular armed groups, who were also injured. It should be noted that in one year, from 2019 to 2020, the number of victims increased by over 37. “We do not want this for Venezuela, and that is why we have asked the United Nations to support us,” insisted the top Venezuelan diplomatic.

Request made to the UN
He recalled that a letter was sent to the UN Secretary General, António Guterres to establish a direct channel with Colombia concerning the border issue. “So that there is a minimum of coordination between the public security forces (in both countries).”

Likewise, the Foreign Affairs Ministry sent an extensive communication to Ilene Cohn, the UN officer in Charge of the Service for Mine-Related Activities, requesting assistance to deactivate the explosives left behind by Colombian paramilitary groups. 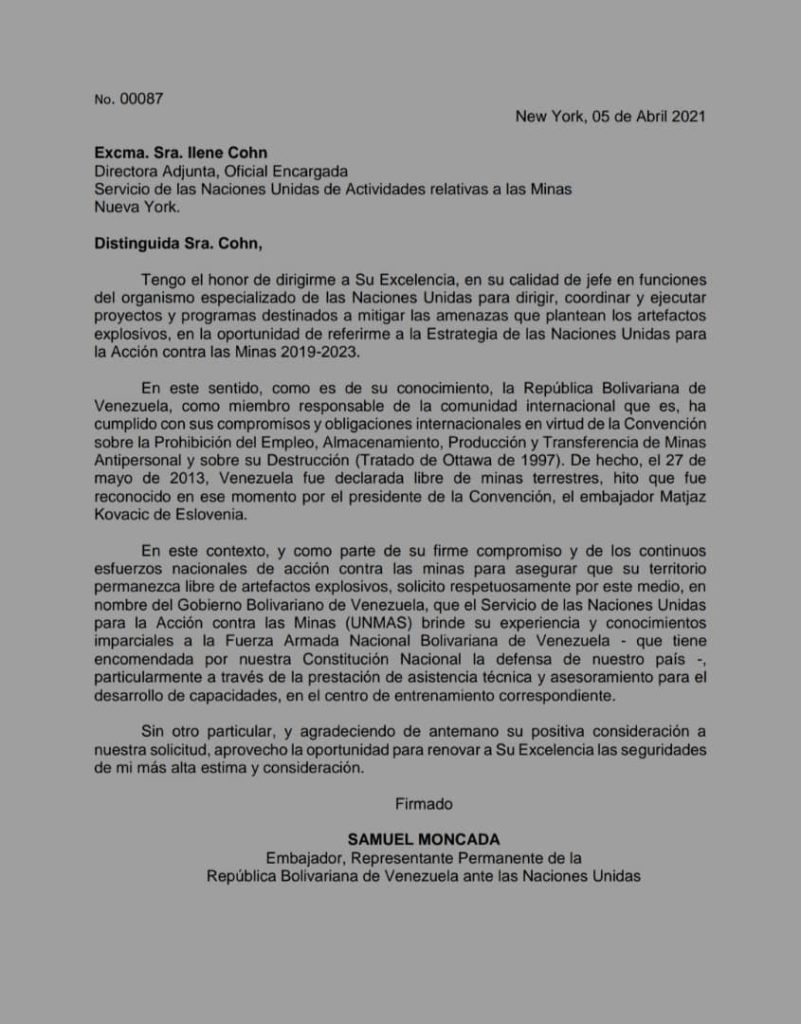 “Colombia is a narco-state and no-one can deny it”
Arreaza explained how the Venezuelan people suffer the consequences of a conflict that has lasted for more than 60 years in the neighboring country. “Colombia is a failed state from every point of view. The helplessness along the border is almost absolute,” he said, as control of these territories in the Colombian side is held by paramilitary gangs or those belonging to drug traffickers, compounded by the Colombian government’s inaction to stop them.

He added that the Colombian government has abandoned its borders for more than 70 years. However, he asserted that total control of La Victoria in Apure state has already been undertaken by Venezuelan forces to restore peace.

“The United States has outsourced the war with irregular groups in Colombia that are on the border,” he noted.

Wilfredo Cañizares, human rights defender in the neighboring country and director of the Progresar Foundation in an interview for RedRadioVe, stressed that the entire Colombian border with Venezuela is in the hands of narco paramilitary groups. Due to what happened in Arauca, a border area with populations in Apure state, is just a sample of what has been built over time by criminal elements, all with the intention of crossing into Venezuelan territory.

The human rights activist illustrated the seriousness and danger that the implantation of antipersonnel mines represents. As part of that military aggression, it is an ongoing drama that has added about 13,000 victims in Colombia in recent years.

For this reason, he asserted that “the Venezuelan people cannot tolerate the installation of landmines, because mines destroy local communities.” He pointed out that in his country there are entire communities that cannot go off their roads and highways because they are surrounded by minefields. 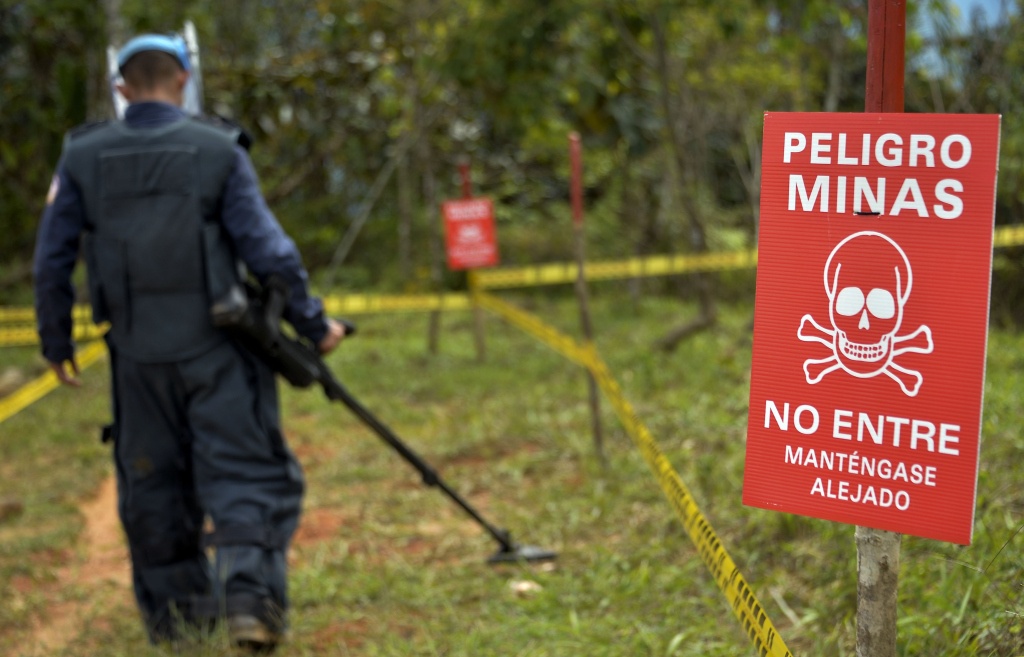 Featured image: Venezuelan Chancellor, Jorge Arreaza in a press conference this Wednesday, April 6, explaining why Caracas is looking for UN assistance for the removal of antipersonnel mines planted by elements from Colombia, while also requesting assistance to open channels of dialogue with the Colombian government that have so far rejected all attempts of coordination launched by Venezuelan authorities. Photo courtesy of Prensa Presidencial