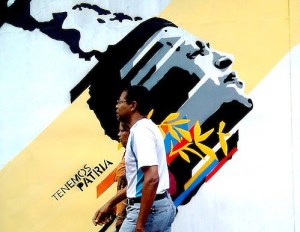 Naturally, the news came from Miami. It couldn’t be from anywhere else. The scam: Several former Latin American leaders – in some cases with dark memories – “urged” the OAS and the European Union (EU) to reject what they have dared to call “electoral fiction” in Venezuela.

These gentlemen, fulfilling the mandate of the U.S. State Department, oppose the parliamentary elections called for December 6, 2020, which will renew all seats in the National Assembly, through universal, direct, personal and secret ballot.

And, as was to be expected, the self-proclaimed interim president, Juan Guaidó, in addition to calling the elections, for which all the democratic norms established by the Venezuelan Constitution have been fulfilled, an “electoral farce,” has rushed to make warnings and threats, totally forgetting that he is only a deputy, who in order to exercise his power has to submit to the vote of the people.

And he should also know that perhaps the time has come for him to put up a retaining wall against his arrogance, his mercenary, and terrorist behavior, and his lack of ethics.

Guaidó and those who “fabricated” him fear that the Venezuelan people will give him what he deserves, and then the laws will hold him accountable for, among other things, the theft of money from the nation’s financial resources that has been stored in foreign banks; for the call he has made for foreign military intervention into his country; and for being involved in the most recent attempts to kidnap or assassinate legitimate President Nicolás Maduro.

The proclamation of characters such as the ex-presidents José María Aznar, from Spain; Álvaro Uribe, from Colombia; the Mexican Vicente Fox; the Panamanian Mireya Moscoso and Mauricio Macri, from Argentina, among others, is the most ridiculous interference in the internal affairs of a country, with the aggravating factor that each of these men who, if we look at their backgrounds, are full of mud, and are no more than a cast of bad-tasting caricatures that have alienated themselves from their people and allied themselves with the interests of the government of the United States.

In order to add more to their voluminous curriculum vitae against the Latin American peoples, they have chosen the OAS and its discredited secretary-general, Luis Almagro, to beg that institution to reject the elections called for next December in Venezuela.

There is no doubt that this is a pre-election scam in which nostalgic ex-participants, among others, are now living off the story and perhaps the money that could come from their anti-popular rhetoric and progressive governments in Latin America.

When one of these characters becomes lost, they don’t hesitate to look for them in Miami, where mediocrity and mendacity is always in vogue.