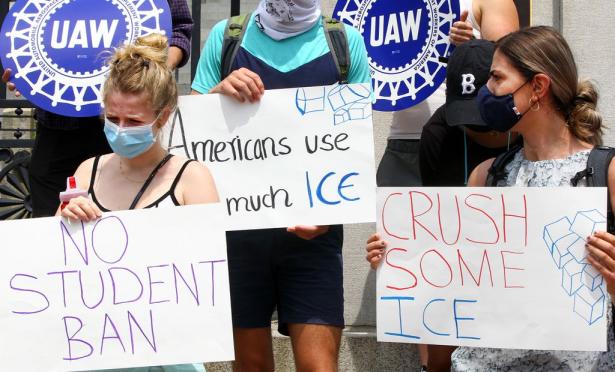 The federal government was forcing Harvard and MIT to “choose between a reckless reopening or reopening or forsaking their [international] students,” the universities said.

Facing fierce opposition, the US Department of Homeland Security Tuesday announced that it has withdrawn visa guidelines that barred international students from the US if all of their classes were to be conducted online this fall.

The surprise announcement came during a federal district court hearing Tuesday in a lawsuit filed by Harvard University and MIT seeking a temporary injunction of the guidelines.

The decision means that the US Immigration and Customs Enforcement’s decision in March to allow international students to continue their studies remotely without impacting their visa status due to the coronavirus remains in place. It is unclear what this means, however, to students whose visas are expiring and to new students who are applying for visas and whose classes may be entirely online.

The scheduled court hearing lasted less than five minutes. The US government announced that it would rescind the directive announced last week on international students, which has caused confusion and spurred Massachusetts Attorney General Maura Healey and other attorneys general across the country to file their own lawsuits.

Harvard and MIT on Tuesday were expected to argue that the federal government would harm tens of thousands of students, universities nationwide, the US economy and public health, if it carried out its plan to bar many international students from studying in the United States.

In a high-stakes court hearing that could have determined the fate of many international students studying in the US this fall, Harvard and MIT intended to urge US district court Judge Allison D. Burroughs to issue a preliminary injunction and temporary restraining order preventing the Department of Homeland Security and US Immigration and Customs Enforcement from applying their new visa rules, which bar foreign students from studying in the US if all of their classes will be conducted online.

Implementing the rules would “diminish the incomparable contributions made by international students to American social sector organizations, businesses, and the economy,” the universities said in court documents filed on Tuesday before the hearing. “The directive also poses a threat to public health: By operation and design, it aims to force universities to reopen before they have determined it is safe to do so, imperiling not only their students, faculty, and staff but also their surrounding communities.”

The federal government was forcing Harvard and MIT to “choose between a reckless reopening or reopening or forsaking their [international] students,” the universities said.

Universities had suggested that these visa guidelines were an attempt by the Trump administration to push them to reopen for political gain.

The new federal guidelines, announced last week, would have forced many international students to leave the country or transfer to another college if classes are held online, putting pressure on administrators to reopen campuses. Many colleges and universities, including Harvard and MIT, plan to offer some or all of their classes online this fall in an effort to prevent the virus’s spread.

In normal times, international students are not allowed to take more than one course online, but the federal government waived that requirement this spring and summer because of the pandemic. The new rule was, for the most part, a return to the normal policy, but includes an option for students to return to the United States if their school conducts a hybrid program, with some courses taught in person and others online.

Still, the rule had upended plans for many universities and students and drawn fierce opposition.

Nearly 60 schools — including Boston University, Amherst College, Brandeis University, Brown University, Cornell University, Dartmouth College, and Yale University — voiced their support of the Harvard/MIT lawsuit in legal filings with the US District Court in Boston. Companies, including Facebook and Google, along with the US Chamber of Commerce, have filed supporting legal briefs.

Massachusetts Attorney General Maura Healey, joined by her counterparts from 16 other states and the District of Columbia, sued the Trump administration Monday over the new rule, arguing that it would pose significant financial harm to universities who would lose out on tuition and other revenue from international students. That lawsuit also contends that the federal government failed to consider the health of students, faculty, and staff, if international students are required to attend courses in person, and fails to consider the fact that in some countries, remote learning is not possible for students.

Still federal officials insisted that US immigration law has required students to take their classes in-person for decades and the July guidelines should not have come as a surprise. The rules were relaxed back in March temporarily to deal with an emergency of the global pandemic, said US Attorney Andrew Lelling in court documents filed on behalf of the Department of Homeland Security.

The federal government has always been concerned that allowing international students to be in the US and learn entirely online would give them flexibility to be anywhere in the country without being properly monitored, raising national security concerns, Lelling said in court documents.

ICE made “the decision to exercise its discretion to ‘modify’ its posture announced in its March guidance,” Lelling said, adding that colleges and universities can offer a hybrid approach and have both online and face-to-face classes.

“This agile approach to the Fall 2020 semester demonstrates that ICE considered and balanced the equities of schools, foreign students, and the agency’s need to uphold and enforce the immigration laws and regulations,” Lelling said.

Featured image:  Earlier this week, Massachusetts Attorney General Maura Healey and international students rallied at the State House against ICE visa rules that would potentially remove students from the country or ban entry of others just before the semester begins , Pat Greenhouse Globe Staff.