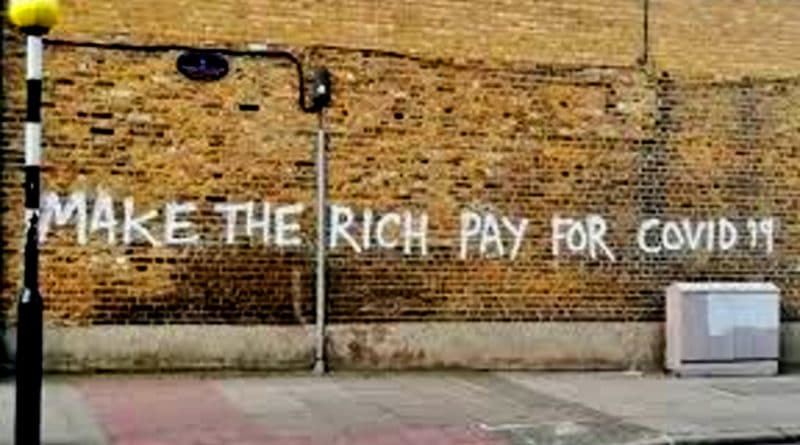 Like a lie detector, Covid-19 has made obvious at least two phenomena that have been taking place already over the past few years: the decline of the U.S. empire and the failure of capitalism.

Since the end of World War II, the U.S. has portrayed itself and sold itself as the great economic, military, technological, and energy-source superpower. Between 1947 and 1991 within the framework of the Cold War, upheld by Truman’s 1947 Doctrine of Containment (of communism), the U.S. imposed its power on the world. The Marshall Plan was the bait for a stealthy incursion into Western Europe, and, for purposes of avoiding the spread of socialism in these regions, the U.S. counted on the support of its armed branch, NATO, established in 1949.

The main weapon used by the U.S. to impose its will has been the dollar, which, since 1944, in the Bretton Woods agreement, was declared the global reference currency. Having given a single country the privilege of allowing its currency to rule the monetary system of the whole planet was a serious error that we, the human race, have committed.

RELATED CONTENT: It’s Time to Kick Police Unions Out of the Labor Movement – They Aren’t Allies

But we humans committed a second error, and that was to have allowed the U.S. to detach itself from the gold standard in 1971 and begin to base the value of the dollar, to which all other currencies were indexed, on something as ethereal and manipulable as confidence/ mistrust. A third error was allowing that it be mandatory for all petroleum to be purchased in dollars, leading to serious consequences – the flood of dollars in the world and the establishment of a system of financial payments dominated by the U.S. – the SWIFT system.

One must recognize that this was a perfect strategy of domination. It is due to the power of the dollar that the US has threatened and blackmailed the entire world. When countries do not yield to the interests of the U.S., they proceed to blockade those countries financially through the SWIFT system, and if that does not work, they begin to attack their currency and manipulate its price, indexed to the dollar.

For a number of years now, the U.S. has been losing this super-power status; its economy has lost range, and the dollar has hit the skids. Its international reserves do not cover even 2% of the exorbitant external debt and it is not sufficient for even 2 months of imports (hence the desperation to re-open the economy in the midst of the pandemic.) for decades, the U.S. has imported more than it has exported, and its commercial dependence on China is ever increasing. The U.S. does not have the gold to back up its currency, and, to cap it off, has run out of petroleum reserves quite a while ago.

Covid-19 has not only pointed out the economic weakness of the U.S., shown in the rude and arrogant attitude of the government in the midst of the pandemic, it has also served as a catalyst of world reorganization that has been years in the making.

The world is advancing toward a multi-polar order based on new trade routes, but above all, on business norms not imposed by the U.S. and which respect self-determination of nations. An order with a monetary system re-configured so that we do not make the same mistake of indexing it to a single currency, but rather to several, or many. A world in which the SWIFT system will not be the only financial checkpoint, one in which there is a great variety of payment compensation systems available, and it is up to the decision of each sovereign state which to utilize.

RELATED CONTENT: The Military Must be De-Funded Along with the Police

The Failure of Capitalism

Another big lie that has been revealed by Covid-19 is the failure of capitalism and especially of neoliberalism, its most brutal form. This is a failure not so much for the upper classes, the bourgeoisie, who have continued to accumulate capital during the whole 20th Century and what has transpired to date of the 21st, but for the classes of workers for wages. In spite of the fact that their work has generated an increase in world productivity of 1127% since World War II, economic inequality and poverty have continued to grow.

Paradoxically, and with profound indignation, the whole world reads the news that “since March 18, 2020, U.S. multi-millionaires have increased their wealth by $565 billion dollars and have increased their net worth by 19% since the start of the pandemic,” while 42.5 million people have been thrown out of work in the U.S.

Covid-19 is showing the great contradictions, both internal and external, in the U.S. Not only because of its inability to contain the spread of the coronavirus but also because of the exclusion, the discrimination, the poverty, and the repression that we all can see on the television. All these are typical of capitalism.

Neoliberalism, whose theoretical base is the monetarism of Von Hayek and his disciple Milton Friedman, was established in the U.S. in 1970. In 1980 it began to permeate Latin America, with the aid of Operation Condor. Thatcher and Reagan imposed it in Europe starting with the so-called “Conservative Revolution” in 1980, and after the West, with the help of Gorbachov, was able to dissolve the Soviet Union in 1990, they imposed capitalism in those areas, disguised as glasnost and perestroika.

The Cracks in Capitalism

It seems most likely that after the pandemic the world will continue to live, predominantly, under capitalism. Perhaps neoliberalism will undergo some revision, an initiative that was not caused by the coronavirus, but which has been planned by the owners of wealth for some time – to save the system by ‘re-inventing” it. They are concerned about the exorbitant inequality, not because they are philanthropic, but because the growing inequality implies more poverty and lower levels of buying power, impeding more economic growth and accumulation, and thus threatening capitalism. They have proposed this in the recent World Economic Forums held in Davos.

It’s not that “revision of neoliberalism” is bad, but it is not the solution. The real causes of the economic inequality are the social relations of the processes of production and means of production held as private property, and the exploitation of the workers. We are not falling into that trap.

Looking at it realistically, capitalism will be with us for some time, although with increasing cracks in the system. The question we must ask ourselves is – how do we take advantage of these cracks to advance toward a world that will be more just and more human?