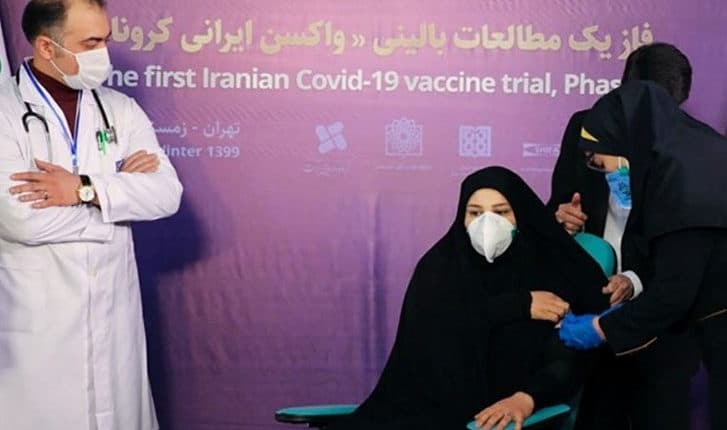 Iran has begun the first phase in the human trial of the homegrown COVID-19 vaccine after successfully completing the initial steps, including tests on animals, and obtaining necessary approvals.

December 29, 2020.-  The vaccine, produced by Iranian experts at the Headquarters for Executing the Order of Imam Khomeini, was administered to three volunteers at a ceremony in Tehran on Tuesday, the first of them being Tayyebeh Mokhber, the daughter of the organization’s CEO Mohammad Mokhber.

It is dubbed Coviran Barekat after the pharmaceutical group that developed the vaccine against the coronavirus pandemic.

Speaking on the sidelines of the ceremony to launch the vaccine trial, Health Minister Saeed Namaki said, “Today is one of the most promising days for the Iranian nation.”

RELATED CONTENT: Iran Urges the WHO to Make an Effort to end “Unilateral, Illegitimate” US Sanctions Amid Covid-19 Pandemic

“It is a day when we could fortunately make the first injection on humans following a long period of efforts on the part of the country’s leading scientists in the field of technology and biotech, who produced the COVID-19 vaccine after various stages, including animal studies and models,” he added.

A total of 56 volunteers would receive two shots administered 14 days apart in the first human trial of the Iranian vaccine and the results will be announced 28 days later.

The vaccine is of the inactivated type, which is made of a virus that is weakened or killed by chemicals.

Mokhber said that in addition to the Coviran Barekat vaccine, the Headquarters for Executing the Order of Imam Khomeini is following the vaccine production through six other ways.

“From the next two or three weeks, we are ready to produce 1.5 million doses of the coronavirus vaccine in Iran monthly,” he said.

“The equipment required for the production of the coronavirus vaccine in Iran has entered the country and we can reach the production level of 12 million in the near future thanks to the support provided by the Health Ministry and the country’s zealous scientists,” he said.

Iranian scientists have been among the frontrunners in the international race to develop safe and effective vaccines aimed at stopping the spread of the highly-infectious respiratory disease.

Tehran said last month that eight of the vaccines it is formulating locally against COVID-19 had made their way onto the World Health Organization (WHO)’s list of 48 promising candidate vaccines.

In parallel with efforts at developing home-made vaccines, Iranian authorities have said the county has plans to pre-purchase foreign brands that pass safety and efficiency tests.

Iran, one of the countries hardest hit by the outbreak, reported its first cases of the fast-spreading disease in late February, around a month after the virus first showed up in China.

The Health Ministry on Tuesday reported 6,108 daily infections, pushing the total number to 1,212,481. It said 132 patients had lost their lives to the coronavirus in the past 24 hours, bringing the death toll to 54,946.