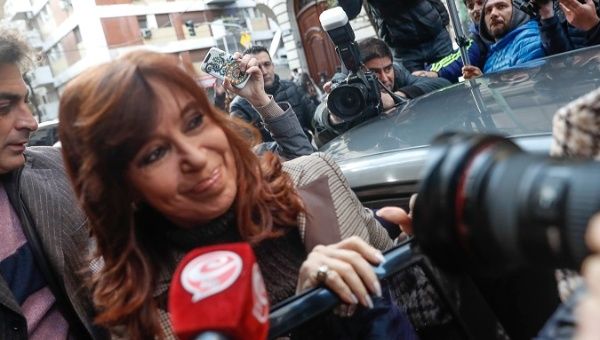 About 45 percent of Argentines would support the leftist leader in a second round of voting on next October 27.

Argentina’s former President Cristina Fernandez-Kirchner (CFK) would take a 9-point lead in a possible Oct. 27 second round against President Mauricio Macri, according to an Isonomia Consultant survey released over the weekend.

In the first round, however, both candidates poll as technically tied, with each getting about 30 percent of valid votes. Third place would depend on who the moderate Peronism’s candidate will be.

The poll results did not surprise many local analysts given that Argentina’s economy has been worsening since Macri began his presidential term on Dec. 10, 2015. The current annual inflation rate reached 54.7 percent in March and poverty has spread to 32 percent of the population, a situation which has weakened Macri’s re-election chances.

It reads: “Macri is chaos!!!! Please, our country’s risks are going up because you are not credible, because your government is the worst ever, because you led us to an immense social crisis, because you lie from when you get up til you go to sleep!! Either you take control once and for all or you resign. You are doing a lot of damage!!!”

RELATED CONTENT: The Foreigners Who Choose Venezuela as a Home Speak: Why do They Stay?

CFK, the former leftist president has been the victim of an intense lawfare campaign and will be on trial for “The Willows” case on May 21. Her trial involves an alleged diversion of public resources and money laundering through hotels belonging to the Kirchner family in Patagonia.

The official announcement of her candidacy is slated to happen at the Racing soccer stadium, one of the most historic places in Buenos Aires, on May 20, just one day before her trial.

As a result of the economic recession induced by Macri’s neoliberal policies, about 96 percent of Argentines have been forced to change their consumption habits since Jan. 2019, according to the General Index of Economic Expectations (IGEE), as reported by El Dia.