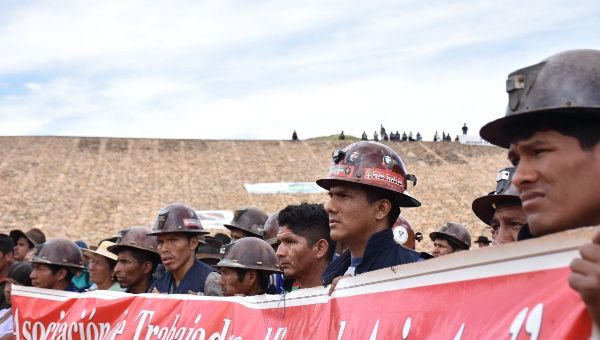 Since 2006, Bolivia’s economy has grown nearly five percent annually and lifted almost a third of citizens out of poverty.

The jibe refers to speech by Carlos Mesa in 2005, when he announced his resignation from the presidency after just two years in office. In the speech, Mesa attacked then-union leader Evo Morales’ plans to nationalize natural resources and to reject the International Monetary Fund (IMF), saying, “The only reason we can pay [public sector] salaries is because of the handouts we get internationally because I extend my hand.” He added that nationalization of the country’s gas reserves is impossible because “Spain, the U.S. and the World Bank have told us so.”

The speech ended with a message to Morales warning that “it’s easy to make little speeches about sovereignty and independence whilst sat across the table. Come and govern, and then you’ll see the realities of administering the state.”

Carlos Mesa is now the leading candidate for Bolivia’s opposition, polling closely behind President Morales for the general elections on October 20.

Evo Morales has governed since 2006.

The minister’s comments come as Mesa recently released a video in which he accused the government of failing on issues such as security and ‘economic stagnation.’ In response, Canelas said, “In the past few years Bolivia has occupied first, second and third place in economic growth, and it’s United Nations Economic Commission for Latin America and the Caribbean (CEPAL,) The World Bank, the IMF who say that. When Carlos Mesa was president and Saul Lara was his minister, they had to beg for international charity just to pay salaries.”

Canelas also criticized Mesa’s comments on security saying, “It would be interesting for former President Mesa to show us any figure from any Latin American security monitor that shows more insecurity now than in 2003 – 2005, when not even police salaries were guaranteed due to our country lacking economic resources.”

Since Morales came to power in 2006, the economy has grown at an average of nearly five percent, with 3 million citizens in a country of 11 million, having been lifted out of poverty.

Carlos Mesa first acted as vice president to Gonzalez Sanchez de Lozada, who fled the country to Miami (his present residence) by helicopter amid social protests against privatization. Following Sanchez de Lozada’s departure, Mesa took the reigns, but was unable to quell protests, led by then union leader Evo Morales.