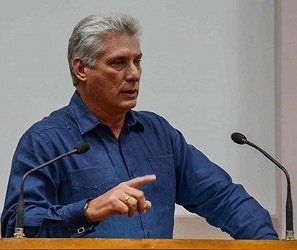 Cuban President Miguel Diaz-Canel said Sunday that the state is working without pause for the return of two doctors kidnapped in Kenya.

“Cuba is working tirelessly for the safe return of Assel and Landy, our doctors kidnapped in Kenya,” the Caribbean dignitary wrote in his account of the social network Twitter.

“With them and their loved ones, we share the certainty that their humanitarian mission will be respected and recognized. We believe in the power of solidarity”, said Diaz-Canel in his message.

The day before, the Minister of Foreign Affairs of Kenya, Monica Juma, offered her solidarity to relatives of the kidnapped Cuban doctors, after having a telephone conversation with her Cuban counterpart, Bruno Rodríguez.

I had telephone conversation with the Minister of Foreign Affairs of Kenya, Monica Juma. We exchanged (information) about the kidnapping of the two Cuban doctors and the actions carried out by the government of their country in the face of an unfortunate incident. He moved his solidarity with the relatives,” the Cuban official wrote in his Twitter account @BrunoRguezP.

In another message, the foreign minister said that Cuban partners in Kenya are safe and that the Cuban embassy in Nairobi maintains permanent communication with them and keeps relatives informed.

“Our health partners in Kenya are safe. The Embassy of Cuba in Nairobi maintains permanent communication with them and keeps family members informed. We get constant updates from the Kenyan authorities”, he said.

The Ministry of Public Health of Cuba reported the kidnapping of two Cuban health partners who provide their services in the county of Mandera, in Kenya.

The medical collaboration of the largest of the Antilles with Kenya began in June of last year and involves 101 doctors who perform their work throughout the African country.