Protesters in Portland facing federal charges are barred from going to “public gatherings” as a condition of release from jail — a tactic one expert described as “sort of hilariously unconstitutional.”

Federal authorities are using a new tactic in their battle against protesters in Portland, Oregon: arrest them on offenses as minor as “failing to obey” an order to get off a sidewalk on federal property — and then tell them they can’t protest anymore as a condition for release from jail.

Legal experts describe the move as a blatant violation of the constitutional right to free assembly, but at least 12 protesters arrested in recent weeks have been specifically barred from attending protests or demonstrations as they await trials on federal misdemeanor charges.

“Defendant may not attend any other protests, rallies, assemblies or public gathering in the state of Oregon,” states one “Order Setting Conditions of Release” for an accused protester, alongside other conditions such as appearing for court dates. The orders are signed by federal magistrate judges.

For other defendants, the restricted area is limited to Portland, where clashes between protesters and federal troops have grown increasingly violent in recent weeks. In at least two cases, there are no geographic restrictions; one release document instructs, “Do not participate in any protests, demonstrations, rallies, assemblies while this case is pending.”

Protesters who have agreed to stay away from further demonstrations say they felt forced to accept those terms to get out of jail.

“Those terms were given to me after being in a holding cell after 14 hours,” Bailey Dreibelbis, who was charged July 24 with “failing to obey a lawful order,” told ProPublica. “It was pretty cut-and-dried, just, ‘These are your conditions for [getting out] of here.’

“If I didn’t take it, I would still be in holding. It wasn’t really an option, in my eyes.”

It could not be learned who drafted the orders barring the protesters from joining further demonstrations. The documents reviewed by ProPublica were signed by a federal magistrate in Portland. Magistrates have broad authority to set the terms of release for anyone accused of a crime. They typically receive recommendations from U.S. Pretrial Services, an arm of the U.S. Courts, which can gather input from prosecutors and others involved in the case. ProPublica identified several instances in which the protest ban was added to the conditions of release document when it was drafted, before it was given to the judge. It remained unclear whether the limits on protesting were initiated by Justice Department officials or the magistrates hearing the cases.

Constitutional lawyers said conditioning release from jail on a promise to stop joining protests were overly broad and almost certainly a violation of the First Amendment right to free assembly.

“The government has a very heavy burden when it comes to restrictions on protest rights and on assembly,” noted Jameel Jaffer of Columbia University’s Knight First Amendment Institute. “It’s much easier for the government to meet that burden where it has individualized information about a threat. So for example, they know that a particular person is planning to carry out some unlawful activity at a particular protest.”

Over the past week, the federal government has sharply increased the number of protesters it’s charging with federal crimes — often for petty offenses that are classified as federal misdemeanors only because they occur on federal property. Court documents reviewed by ProPublica show that over a third of the protesters are charged with “failing to obey a lawful order,” which 14 protesters were charged with between July 21 and July 24 alone.

The office of the U.S. attorney for Oregon, Billy J. Williams, did not respond to ProPublica’s questions about who was making charging decisions. In a recent interview with The Oregonian, Williams urged local citizens to demand that “violent extremists” who have attempted to break through the fence outside the federal courthouse leave. “Until that happens, we’re going to do what we need to do to protect federal property.”

Craig Gabriel, an assistant U.S. attorney who works for Williams, insisted the office understood and respected the right to protest racial injustice. “People are angry. Very large crowds are gathering, expressing deep and legitimate anger with police and the justice system,” Gabriel told The Oregonian. “We wholeheartedly support the community’s constitutionally protected rights to assemble together in large, even rowdy protests and engage in peaceful and civil disobedience.”

Gabriel did not mention the written restrictions against protest that have been made a condition of release for some of those arrested.

Several protesters who were let go on July 23 had bans against demonstrating added by hand on their release documents by Magistrate Judge John V. Acosta, who signed off on them, a review by ProPublica found. Acosta’s office did not respond to ProPublica’s questions.

For those released on July 24, the restriction was added to the original typed document, also signed by Acosta. One protester arrested and released earlier in the month had his conditions of release modified at his arraignment on July 24. The modified order, signed by Acosta, added a protest ban not previously included. 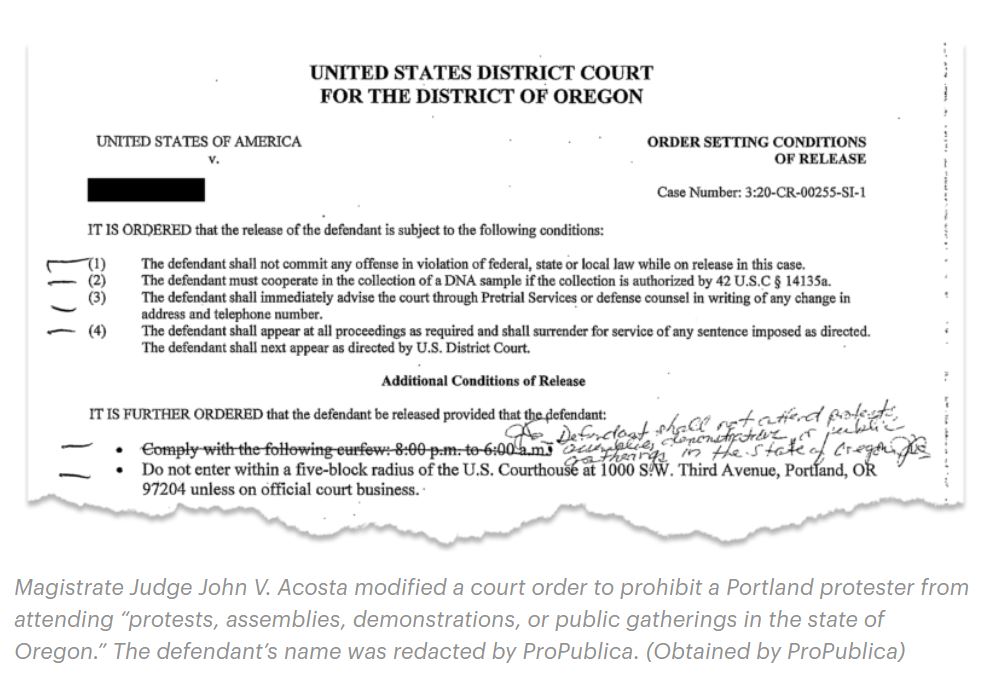 Three of the 15 protesters charged on July 27, in orders signed by Magistrate Judge Jolie A. Russo, also had explicit protest restrictions added to their release terms. (One release order has not yet been posted to the federal courts database.) Russo’s office did not reply to ProPublica’s questions.

“I don’t see that as constitutionally defensible,” Jaffer said. And I find it difficult to believe that any judge would uphold it.”

The ACLU’s Somil Trivedi said, “Release conditions should be related to public safety or flight” — in other words, the risk that the defendant will abscond. “This is neither.” He described the handwritten addition of a protest ban to a release document as “sort of hilariously unconstitutional.”

Publicly, the Trump administration has claimed that it has no problem with the protests that erupted in Portland and other American cities in response to the May 25 death of George Floyd, a Black man, in police custody in Minneapolis. The administration said it launched Operation Diligent Valor in July with a massive deployment of federal officers merely to protect federal property from “violent extremists.”

Geoffrey Stone of the University of Chicago Law School said that imposing a protest ban as a release condition undermines the distinction between protected protest and criminal activity. “Even if they’re right that these people did, in fact, step beyond the bounds of the First Amendment and do something illegal, that doesn’t mean you can then restrict their First Amendment right.” 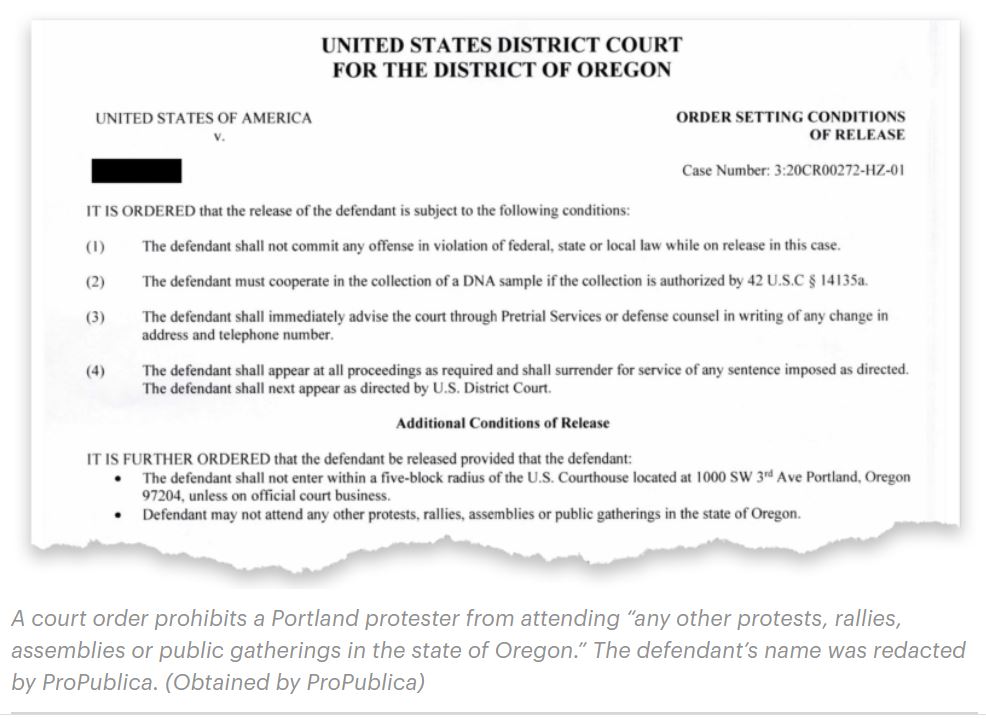 In many cases, the charges leveled at Portland protesters are closely tied to their presence at the protest — and not to any violent acts.

Eighteen of the 50 protesters charged in Portland are accused only of minor offenses under Title 40, Section 1315, of the U.S. Code. That law criminalizes certain behavior (like “failure to obey a lawful order,” as well as “disorderly conduct”) when it happens on federal property or against people who are located on that property. In other words, it describes behavior that wouldn’t otherwise be a matter for a federal court.

Dreibelbis told ProPublica he roller-skated into the protest, expecting to attend only briefly. He said he knelt on the sidewalk and was arrested by officers. (The charging document filed against Dreibelbis offers no arrest details.)

Section 1315 is the same law the Trump administration is using to justify initiating the federal show of force in Portland, which the administration has said it intends to employ in other cities where protests have raged since Floyd’s death.

The law allows the secretary of homeland security to supplement the Federal Protective Service, the relatively small agency partly responsible for federal building security, with law enforcement agents from the department’s other agencies (such as Customs and Border Protection).

Both President Donald Trump and his predecessor, Barack Obama, have invoked that part of the law in the past. But the use of that same law to file criminal charges appears to be novel. The Obama administration sent a “surge force” of 400 FPS agents, and a dozen CBP agents, to Baltimore in 2015, when the police killing of Freddie Gray sparked broad unrest, but no charges were filed under Section 1315 itself in that response.

In Portland, the federal government has relied on the FPS and U.S. Marshals to write affidavits used to charge protesters in federal court. But it has detailed other agencies on the protest front lines: DHS agencies cited in court complaints include CBP, through its BORTAC tactical unit; Immigration and Customs Enforcement’s investigations unit; DHS’ Office of Intelligence and Analysis, in addition to FPS. Complaints also cite the U.S. Marshals and the Bureau of Alcohol, Tobacco, Firearms and Explosives, which are Justice Department entities.

In the first weeks of the operation, the most common charge against protesters was assault of a federal officer — which, in some cases, counted as a crime on federal property because protesters on the streets were shining lasers at officers inside the courthouse. (DHS has claimed that some officers may permanently lose their vision, but as of July 24, the most serious injury detailed in federal charging documents was an agent who reported seeing spots in his eyes for 15 minutes after the laser attack.)

Since then, almost all cases have accused protesters of assaulting a federal officer (generally a misdemeanor charge).

In many of the assault cases, files are thin and no details of the allegations have been posted, even for protesters charged as early as July 6. No case files identify an alleged victim — either by name or by the “unique identifier” on their uniforms. (DHS officials have claimed it’s unfair to describe the federal agents in Portland as “unidentified” because they clearly show identification.)

Some assault accusations charge protesters with throwing unidentified objects at officers in body armor, who were unharmed.

Even those defendants who aren’t explicitly barred from attending protests are unable to return to the epicenter of Portland’s unrest as a condition of their release. They are placed under a curfew (either from 8 p.m. to 6 a.m. or 10 p.m. to 6 a.m.) and told not to go within five blocks of the courthouse grounds except for court hearings.

Experts said that while restrictions of that sort are common, they’re still questionably constitutional. “Though ‘stay away’ orders from a place where a potential crime has been committed are generally standard,” the ACLU’s Trivedi said, “‘stay away’ orders from public places that are part of the public square are more questionable.” But he and others conceded that the government could make an argument that it was necessary to prevent further wrongdoing.

They saw no legitimate rationale for a blanket ban on protests.

“I suppose the government could argue, ‘You disobeyed a law enforcement officer at a protest, and we don’t trust you to not do it again,’” Trivedi said. But the release documents already instruct defendants that they are not allowed to break any laws while awaiting trial.

“If they want to say ‘don’t break a law again,’ they’ve already said that,” Trivedi told ProPublica. “Beyond that, the only part that’s left would be not letting you exercise your First Amendment right.”

Driebelbis, for his part, must now watch the protests proceed without him. “I work across the water from the protests, and I can see it every” night, he told ProPublica. “I’m protesting from this side.”

He hastened to clarify that he didn’t mean he was attending a protest in violation of the court order. “Not protesting! There’s no protesting going on in the party of one. But I am there in spirit.”