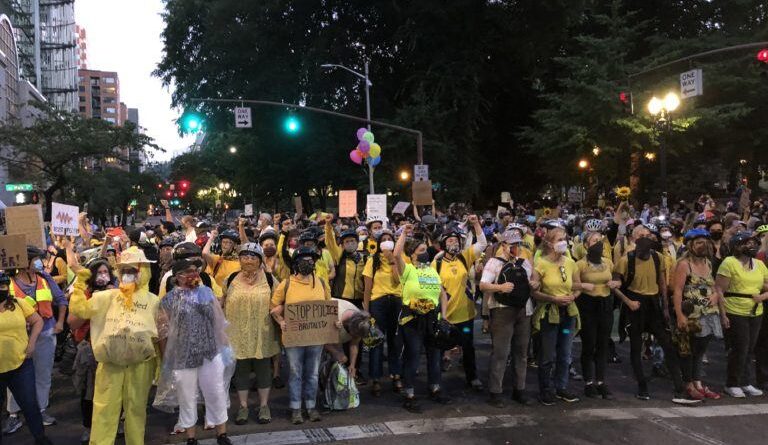 Soon after George Floyd, an unarmed 46-year-old Black man, was suffocated to death by Minneapolis police on May 25, 2020, a nationwide response to his killing reenergized the Black Lives Matter (BLM) movement. BLM was founded in 2013 after the acquittal of Trayvon Martin’s killer. It has only grown and evolved in the years since, especially strategically. The movement’s demands include an end to systemic racism, racial injustice and police brutality; the arrest, prosecution and conviction of killer cops; the removal of monuments and statues which commemorate Confederate figures and other white supremacists; and the defunding of our archaic and oppressive policing system. The movement for Black lives operates based on the principle that the interconnected roots of structural racism, racial oppression and police violence – colonialism, genocide, white supremacy and capitalism – must be confronted and dismantled together. Moreover, it recognizes the importance and significance of functioning as an intersectional and multiracial struggle for liberation and justice.

While BLM protests have spread to virtually every U.S. city and town and attracted the participation of tens of millions of Americans, it is the city of Portland, Oregon that has made headlines recently. Last week, heavily-armed, camouflage-clad secret police began attacking and snatching antiracist protesters off Portland’s streets and forcing them into unmarked vans – an Orwellian scene in every sense. After a national uproar, we learned that those officers were among members of federal paramilitary-style units deployed from the Department of Homeland Security’s (DHS) Customs and Border Protection (CBP) and Immigration and Customs Enforcement (ICE) and the Department of Justice’s (DoJ) Marshals Service. The Trump administration initially attempted to justify the deployment of these forces to Portland by claiming they were sent to protect federal buildings and other federal properties. They have since altered that narrative, suggesting that the federal units are needed to curb violent crime. If history has taught us anything, however, it is that the use of militarized federal agents and equipment as an occupying force in our cities only enflames tensions on the ground and leads to atrocities, like the assault on 53-year-old protestor Christopher David, a Navy veteran beaten and pepper-sprayed by federal agents for trying to engage officers in conversation and nonviolently refusing an illegal order to vacate the public area outside a Portland courthouse.

The reality is that a malignant narcissist and white supremacist president has brought U.S. imperialist militarism and the so-called “War on Terror” home to suppress political dissent and the free exercise of our constitutional rights – first in Washington, D.C. and now in Portland. The video and images coming out of Portland in recent days have been nothing short of warlike. Federal agents have illegally fired tear-gas and other dangerous projectiles at protestors and indiscriminately beat and arrested all manner of peaceful participants and observers, including journalists. We also know that federal agencies are conducting air surveillance over Portland, which officials argue is needed to identify potential threats. The good news is that the Portland Police Bureau (PPB), who have been the subject of their own criticism for a history of heavy-handed and abusive tactics against the community, have now been ordered by the Portland City Council to stop cooperating with federal officers.

In response to the Trump administration’s unprovoked and illegal assault on peaceful demonstrators, many of whom are young individuals, Portland-area mothers decided to form the “Wall of Moms” (WOM). Organized by Bev Barnum, a Mexican-American woman, and dressed in yellow shirts and protective gear, the moms began putting their bodies on the line to safeguard protesters against aggressive law enforcement. They have been singing, dancing, locking arms, bringing flowers, and holding signs, one of which read “Moms getting into good trouble,” paying tribute to recently deceased civil rights icon Rep. John Lewis. According to their newly published website, WOM describes itself as “a PDX-based network of womxn and non-binary mother-identifying folx” dedicated to defending and protecting BLM protestors, especially the youth, from police brutality. WOM’s mission/call to action includes the following impassioned, heartfelt reasoning for their formation: “As soon as you become a mom, something is triggered in you. It’s primal. It doesn’t matter if it’s your kid or not, you’re going to help them. If you see a kid drowning, you’re going to jump into the water.” They have also made it a point to note on the website that all their management and direction comes from Black leaders, fully honoring and respecting that BLM is a movement led by people of color.

This is not the first time that such a nonviolent resistance tactic has been employed by a group of mothers to stand against state violence and oppression. The Wall of Moms has a basis in history. According to Swarthmore College’s Global Nonviolent Action Database (GNAB), which was founded in 2011 to provide free access to information about historical cases of nonviolent anti-oppression campaigns, two campaigns in particular offer historical precedent for the justice-oriented resistance philosophy and brave efforts of the Wall of Moms: Argentina’s “Mothers of the Plaza de Mayo” and Kenya’s Mothers of Political Prisoners.

During Argentina’s “Dirty War” period (1977-1982), Argentines were routinely tortured, imprisoned and disappeared by the country’s military junta, which came to power after a coup that ousted the existing democratic government. In response, the “Mothers of the Plaza de Mayo” campaign was launched as a pro-democracy initiative, with a primary demand being that their kidnapped and disappeared family members, numbering in the thousands, be returned. The mothers (and grandmothers) of Buenos Aires’s Plaza de Mayo, a famous plaza located outside the presidential palace, engaged in sit-ins, marches, weekly demonstrations, media outreach, letter writing, among other nonviolent direct-action methods. The mothers wore headscarves to identify themselves. As the group gained popularity nationally and globally, the Argentinean government attempted to discredit the moms, labeling them “las locas” (the madwomen), and detained, beat, and even threatened to kill them. Despite the government’s fierce and unrelenting efforts to quell the uprising of mothers and their popular message, the moms continued to protest weekly and grew their ranks through hundreds of linked chapters nationwide. They inspired the formation of other human rights groups as well. The protests of Las Madres contributed significantly to political transition from 1981-83. Despite the fall of military dictatorship in 1983, the mothers continued their demonstrations and search for missing loved ones. They turned their attention over the next several decades to holding military officials accountable for the disappearance of their children and sought to bring the murderers to justice.

During the early 1990s in the country of Kenya, mothers united to demand democratic reform and the release of political prisoners, specifically their sons. Led by future Nobel Peace Prize winner Wangari Maathai, the women challenged the dictatorial and repressive Moi government. The methods used by the Kenyan mothers to be heard and acknowledged included hunger strikes, singing, encampments and vigiling. The moms endured beatings, threats of being shot, and tear-gas. In response to being brutalized, in a now-famous act of resistance a few of the protestors disrobed, flaunted their breasts, and shouted “What kind of government is this that beats women! Kill us! Kill us now! We shall die with our children!” The tactic of shaming succeeded as the embarrassed police retreated, at least for a time. The government harassment and violence against the women only proved to grow their support and allies, both within Kenya and internationally. The mothers were eventually forced to take refuge at a cathedral after being removed from a park plaza, “Freedom Corner,” where they had been stationed. With the support of church officials who gave them sanctuary, the mothers were able to gain protection and continue their efforts. They held forums, meetings, engaged in leafleting, and attended the court hearings of their sons. By January 1993, all the mothers and their imprisoned sons were reunited.

The nightly Portland protests have swelled to thousands of antiracist demonstrators. They have been joined by allied protestors who are standing against Trump-era authoritarianism and federal forces unconstitutionally occupying their city. Inspired by the Wall of Moms, and due in large part to the news that the Trump administration announced plans to send federal agents to other cities as well, including Chicago, Albuquerque and Kansas City, the WOM campaign has spread to Seattle, Austin, San Francisco, NYC, Baltimore, Philadelphia, DC, and elsewhere. The Wall of Moms represent the very best of humanity by manifesting a selfless ethic of care and responsibility in service to others. Like the courageous and determined mothers of Argentina and Kenya before them, they are risking their personal safety to protect and defend their loved ones and neighbors against tyranny. They have also inspired other groups to form and join them, such as the aptly named “Wall of Dads” and the “Wall of Vets,” the latter of which is comprised of a group of veterans who say they were inspired by Chris David and are fulfilling their constitutional oath to the nation and its people.

Trump’s authoritarian response to antiracist demonstrations across the country might very well be a dress rehearsal for an attempt to retain power should he lose the presidential election in November – Trump has repeatedly said that he will not necessarily concede should he suffer defeat in the upcoming election. What we need now is for military and political leaders to join the people and resist Trump’s fascist policies which threaten whatever democracy we have in this country – a true test of the strength and courage of a nation. What we do now in response to Trump and his despotic regime could define the future of the republic. Regardless of political affiliation or allegiance or whether you agree with the BLM movement or not, we have a responsibility to our Constitution to denounce Trump’s extraordinary misuse of government resources; his violation of the civil liberties of the American people; and his repressive and militarized response to peaceful dissent. This should not be a partisan issue. It is a matter of moral courage and integrity and civic duty to resist these tyrannical forces.

I will leave you with two quotes that speak directly to the necessity of fighting to protect freedom, human rights and liberty, especially in the face of fascist elements right now trying to destroy that very foundation of democracy:

“Protest beyond the law is not a departure from democracy; it is absolutely essential to it.”

“Fascism itself can only be turned away if all those who are outraged by it show a commitment to social justice that equals the intensity of their indignation.”

Brian J. Trautman is an instructor of peace studies at Berkshire Community College in Pittsfield, MA, a peace activist with Berkshire Citizens for Peace and Justice, and an Army veteran. He is also a member of Veterans for Peace. On Twitter @BriTraut.