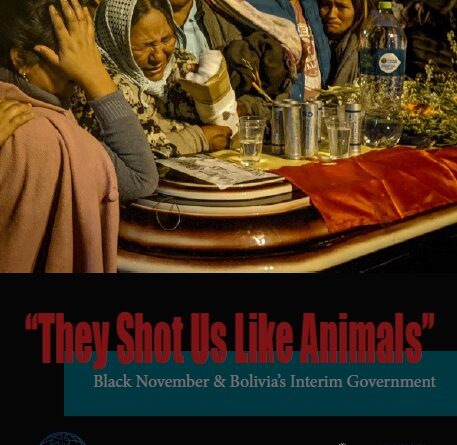 This past Monday, the International Human Rights Clinic (IHRC), an organization member of Harvard Law School and the University Network for Human Rights (UNHR), denounced through a 92-page report “disconcerting patterns of human rights violations” committed by the government of President Jeanine Añez in November 2019.

The report, entitled “‘They shot at us like animals’, Black November and the Interim Government of Bolivia”, was produced after six months of investigation in Bolivia, during which time members of IHRC and UNHR interviewed “more than 1,000 victims, witnesses, journalists and officials”, thus documenting extremely serious human rights violations committed after the Añez government came to power in November 2019.

The full report can be obtained here and its executive summary here.

It was presented in a press release from the IHRC, which states that “The report documents one of the most lethal and repressive periods in Bolivia in recent decades, as well as the growing fears of indigenous communities and government critics that their lives and safety are in danger. Thomas Becker, an international lawyer who was part of the investigative commission, said, “These abuses create an environment that has undermined the possibility of free and fair elections.

According to witnesses in Sacaba and Senkata, where there were civilian protests, the military and police fired – without warning – at unarmed civilians, including those who were helping the injured, in direct violation of the right to life. They also brutally beat the demonstrators, using racist and anti-indigenous language as they attacked them.

In addition to these killings, the abuses include torture committed by security forces – often in collaboration with parastatal groups – who operated in neighbourhoods, hospitals and schools close to the scene of the killing, where they harassed, beat and detained local people. For example, police arrested Kevin Calle, a child with a disability, along with his brother and sister, on charges of terrorism. All three were tortured in custody.