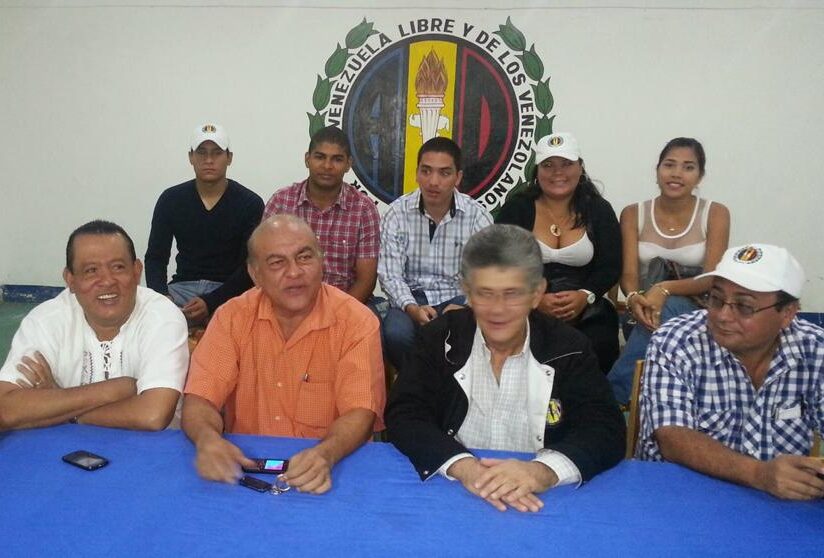 Henry Ramos Allup , with a black jacket (right) next to Sergio Garrido, with a cap (to his right). Photo by Twitter / @nelsonguillen64.

The Secretary General of Democratic Action (AD) party (G4), Henry Ramos Allup, played his card and imposed the party’s Sergio Garrido as the candidate of the Democratic Unity Table (MUD) for the re-elections for governor of Barinas state.

Garrido is the current regional secretary of Democratic Action in the state of Barinas, and has been a member of the party since 1984. During the elections on November 21, Sergio Garrido was elected regional legislator and headed the list of MUD deputies.

During his political career, Garrido was a councilor in the management of former mayor José Luis Machín (2013-2017) and chaired the City Hall of Barinas municipality in the period 2015-2016.

Who aspires to the governorship of Barinas?
The opposition is again divided in the elections. This time it presents four candidates, as reflected in the definitive list of the National Electoral Council (CNE).

For the PCV-APR alliance, the candidate was to be Aldemaro Sanoja. However, earlier today the PCV denounced the rejection of his candidacy by the CNE. Further details were not provided. For MIN Unidad-Democratic Alliance, Adolfo Superlano was registered as a candidate—the very individual who filed the appeal before the TSJ that led to the disqualification of Freddy Superlano (no relation).

Claudio Fermín signed up for the Solutions-Democratic Alliance party, and the final candidate presented by the opposition was Sergio Garrido for the MUD. The Great Patriotic Pole and the PSUV will go with a single unified candidacy, represented by Jorge Arreaza, following the resignation of PSUV governor Argenis Chávez.

These elections—besides being extremely controversial—have become a political challenge for the opposition and for Chavismo, as Barinas is the home state of Hugo Chávez, and has also been governed by the PSUV/GPP since 1998.

Featured image: Henry Ramos Allup in a black jacket next to Sergio Garrido, with a cap (right). Photo by Twitter/@nelsonguillen64.