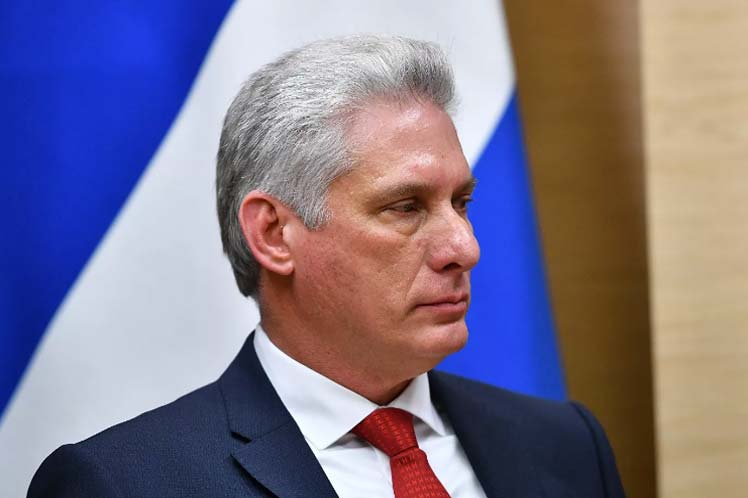 February 12, 2021.- Cuban president Miguel Díaz-Canel said today that the report recently revealed on the alleged health incidents of United States diplomats in this capital, reaffirms the position defended by his country.

The president pointed out on his Twitter account that the document confirms what his nation has been saying based on scientific research: the alleged “acoustic attacks” served as a pretext for the Donald Trump administration to make accusations without evidence and damage bilateral relations.

“The truth always prevails,” emphasized the head of state on the social network.

#Cuba, with science's support, had already said what a new report just revealed: the alleged "sonic attacks" were a pretext for the Trump administration to accuse us with no evidence and harm the relations between both countries. The truth always prevails. #SomosCuba #LivingCuba pic.twitter.com/VVnGIT0RsV

RELATED CONTENT: Washington Openly Spent about $250 Million in Subversive Actions Against Cuba Since 2000

On Friday, Minister of Foreign Affairs Bruno Rodríguez reiterated the Caribbean nation’s willingness to cooperate with the United States in the investigations into these events.

However, the foreign minister added that a serious declassification of the information would reveal how far former President Donald Trump, former Secretary of State Mike Pompeo and Senator Marco Rubio went “to artificially justify a setback in bilateral relations.”

“Someday it will be possible to clarify what happened and what did not happen,” said the head of Cuban diplomacy, who confirmed that his country maintains the will to work with US authorities effectively, both politically and scientifically, to find a solution.

The day before, a report by the Accountability Review Board (ARB), published on the website of the US National Security Agency (NSA), acknowledged that the alleged sonic attacks remained a mystery.

The internal document of the State Department, classified as secret and recently declassified, indicates that 18 months after the events occurred (in 2016 and 2017) it was not known what happened or why, or if anyone was responsible.

He added that the Trump administration’s response to the so-called “Havana syndrome” was plagued with mismanagement and poor leadership, as it did not even appoint a high-level official to investigate.

In addition, there was a lack of coordination and monitoring of established procedures, as well as ineffective communications and systemic disorganization.

Despite this, what happened at the Washington embassy in Cuba was used at the end of September 2017 as a justification for reducing the number of personnel on post by more than 60 percent and effectively closing the United States consulate.

This was done without carrying out an assessment of the risks and benefits that the report requires.