The electoral situation in the ranks of the Venezuelan opposition is becoming more striking every day. This Friday, September 3, Carlos Ocariz of Primero Justicia (PJ) and David Uzcátegui of Fuerza Vecinal, the two pre-candidates of the opposition for the governorship of Miranda state, offered opposing statements on the results of the mechanism agreed between Fuerza Vecinal and the so-called “Unidad” for selecting the unitary candidate to represent the opposition in the November 21 elections.

According to the news website Crónica Uno, Ocariz declared that he already had the results of two of the four surveys conducted by mutual agreement with Uzcátegui; that both had been audited and Ocariz has been the winner; however, he did not have the results of the other two audits.

“Where [the audit] was done, we won,” declared Ocariz, who was formerly the mayor of Sucre in Miranda state. “In one of the two [polls] where it was not done, the difference is 0.40%, and from the other survey we do not have the results. Whatever the MUD decides, I will abide by it. If it is to repeat the surveys as established, with the audits and both commands present, it will be perfect.”

What did Uzcátegui say?
On the other hand, Uzcátegui asserted that he had won three of the four polls, and invited Ocariz to be his campaign manager for the election for the governorship of Miranda. “Those polls were carried out from Tuesday until yesterday,” said the Fuerza Vecinal candidate. “We have the results, Miranda has spoken, and spoken categorically. For us there are no losers or winners. I want to ask Carlos Ocariz to be our campaign command chief.”

He also said that “the idea of ​​conducting surveys was to choose the candidate who had the best chance of facing the national government; and not of being a candidate for just being a candidate. That’s right. We have legitimately and categorically won opinion polls. I am sure that after this, we are going to turn Miranda into the mirror of future Venezuela.”

The process
The commands of each party had signed an agreement that established the method for carrying out the four polls. Ocaríz emphasized the audits, which were part of the agreement as well, while Uzcátegui stressed that he had won most of the polls.

Previously, Ocariz requested an audit and a repetition of the polls when he published on his social media accounts the photo of a handwritten paper containing what may have been points of the agreement. The image shows the signatures of Luis Moreno, Tomás Guanipa, Ángelo Palmieri and David Uzcátegui. The image is provided below: 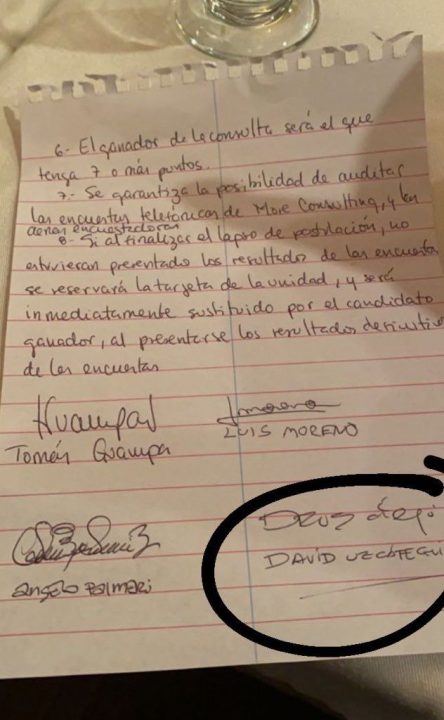 The truth is that while Uzcátegui declared himself the winner, neither of the two candidates offered the numbers on the results obtained from these polls.

The poll firms hired were More Consulting (telephone), Datincorp, Variances and Delphos (field). The latter produced a result in favor of Uzcátegui. A survey conducted between August 31 and September 2 indicates that Fuerza Vecinal has 32.7% of the support of the people of Miranda, while Ocariz has 28.4%.