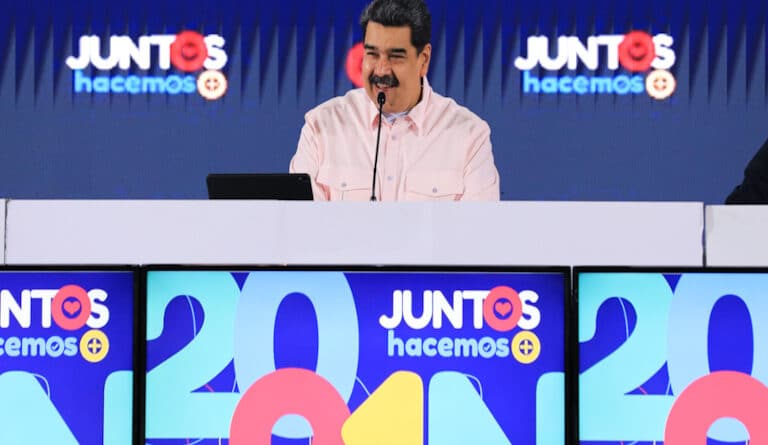 The head of the United Socialist Party of Venezuela (PSUV), Nicolás Maduro, led a working meeting within the framework of the party’s Candidate Training Workshop. This is part of the political preparation of the PSUV representatives who are going to contend in November’s regional and municipal elections.

President Maduro announced that a perfect alliance has now been achieved with the political forces of the Great Patriotic Pole (GPP), and GPP will support all PSUV candidates in their electoral campaigns.

“We went from an internal PSUV selection process to an overall agreement in the GPP,” commented the PSUV head, “and I have now been informed that a perfect union within the GPP has been achieved regarding the campaigns for the 23 governorship and 335 mayorships and all the municipal council candidacies.”

In this regard, Maduro asked the candidates “to break with any vestige of partisanship and sectarianism. Now you are all candidates of hope, of the future.”

He stressed that the representatives elected by the rank and file of the party in the recent Open Primary Elections (EPA) are now the vanguard of the Bolivarian Revolution, and they have the people’s support.

“You all must become the vanguard, which is the highest moral demand from a revolutionary leader,” insisted Maduro. The president also requested the candidates to have a clear idea of “what the role of the revolution is and what role each must play at the country’s current historic conjuncture.”

“The moment the radical opposition parties register their candidates, they will be legitimizing the National Electoral Council (CNE) and the National Assembly (AN) that appointed it,” declared President Maduro.

He also recalled that he had remarked on previous occasions that it was “a matter of time before the sectors of extremism would be brought back—by us—to the electoral path.”

Maduro also remarked that “the November elections are a triumph of the policies of Chavismo in power,” and that with this electoral process “a new cycle of political stability has been opened, which must remain at least until 2030. Every vote that is cast is a commitment to peace, dialogue, and improvement.”

“We have memory and we do not forget,” he continued, “but we have the capacity to move forward, embrace each other, and overcome the problems of the country.”

Consequently, President Maduro asked for a round of applause for the so-called G4, in reference to the radical opposition group that has announced that it will participate in the elections.

PSUV’s first candidate training workshop
“This is the first workshop for the preparation of our program proposals, and campaign lines,” said President Maduro, “the first workshop for envisioning the actions to be carried out, the priorities of the campaign and to share public opinion surveys conducted by the Bolivarian Revolution’s high command.”

Maduro asked to reinforce this combination of leadership “that has been growing in revolutionary spirit all these years; some with more experience and others with the strength and energy of youth.” The president also highlighted that 40% of PSUV’s candidates for the November elections are women.

Recovery of public services
As a first instruction for the political leadership of the PSUV facing elections, Maduro insisted that public services should be improved, including drinking water supply, public transportation and everything that has been deteriorating due to the blockade and also due to indifference of public officials.

“We have overcome sterile debates,” remarked Maduro, “and now we must focus on solving the daily problems faced by the people. Locally, we must connect with our common people, listen to them and rekindle their motivation, and we must commit ourselves to fulfilling our promises after we achieve victory on November 21.”

In this regard, Maduro highlighted that during the primaries, the PSUV membership reelected only 8% of the incumbent mayors as candidates. In the case of governors, there was a 45% renewal.”