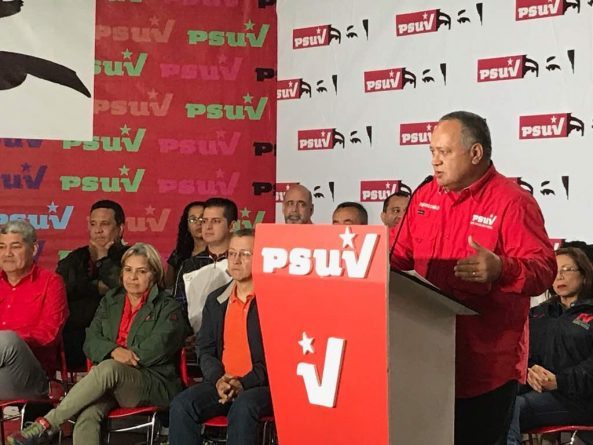 The first vice president of the United Socialist Party of Venezuela (PSUV), Diosdado Cabello, said Monday that the main problem of the Revolutionary Government is the economy, therefore, indicated that by 2019 , will be faced the current financial issues. In the weekly press conference of the party, Cabello stressed that this year the political organization will focus on fighting to achieve the things that are to come, and solve the problems that afflict the Venezuelan population, in an atmosphere of peace, and always in defense of the Bolivarian Revolution.

“2019 is a year that will not be easy. The problems are there. What we do have is the willingness to face them. Our main problem and our main front is the economic one, the financial, there is the root, “said the political leader in a broadcast by VTV.

In that sense, the first vice president of the red organization pointed that the party accompanies the decisions of President Nicolás Maduro, and abides by his instructions, as president of the PSUV, and also Head of State. “When the president gives an instruction to his government, to the ministers, on the fight against corruption, bureaucracy, and other evils that affect us politically and humanly, he also gives it to the party, he give them to us and we assume it as a task immediately, “he said.

With respect to the conspiratorial plans, he indicated that there is an antidote for the sectors of the opposition that want to conspire against Venezuela, and that is the mobilization of the people. “This is not our recipe, it is a recipe from the people who want to be free. There is no way for the right to invalidate the construction of 2 and a half million homes, that can not be erased, two and a half million homes is a tangible fact, visible, verifiable, palpable and also livable, but they could stop the construction of houses, and not just stop it, but remove the homes that have been delivered, “he said. He also said that the war against Venezuela has its origin in the United States, because we do not surrender, and because our people demonstrated that we have dignity. “Every time we invent something the right plays and has a boss who is imperialism, and they move it in around the world, when the US pressures companies not to sell food to Venezuela, they are acting against our people,” he added. .

In this framework, he called for the unity of the people, at the same time exhorted the Revolutionary Forces of the country to continue strengthening the PSUV, and asked its main leaders and the militancy, to support President Maduro in the new term of government that will assume next January 10.