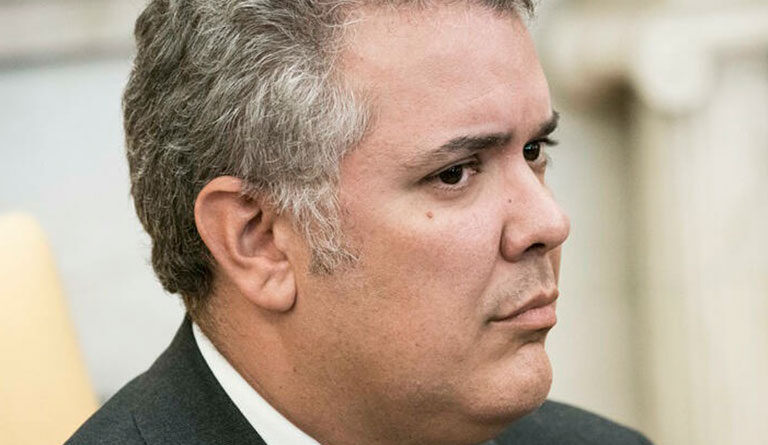 According to a poll released on Thursday, September 2, Colombian President Iván Duque has hit an all-time low approval rate in August, just a year away from ending his term in office, and during a year marked by the pandemic and massive social demonstrations in rejection to his government policies.

According to poll firm Invamer, 75% of those who participated in the survey said they disapprove of President Duque’s performance. The firm published this data in its quarterly study on the acceptance of the government among the people of Colombia.

Duque’s rejection numbers stood at 76% last May, when the government was facing daily protests that were harshly repressed by the police.

RELATED CONTENT: Colombia is Creating False Conflicts at its Border with Venezuela

Duque has surpassed President Andrés Pastrana’s (1998-2002) unpopularity, who held the record of 74% disapproval, according to Invamer.

Meanwhile, 78% of those surveyed had declared that they agreed with the demonstrations that broke out on April 28 against the government’s proposed tax reform.

It was in 2019 that nationwide protests against President Duque’s administration had broken out for the first time. Those protests returned with strength this year after a pandemic-imposed pause of a few months.

Since late April, tens of thousands have taken to the streets to repudiate Duque’s mismanagement of the health crisis and to demand a more supportive State in the face of the economic ravages resulting from the pandemic.

RELATED CONTENT: What’s Behind the Aid to Afghan Collaborators in Colombia?

Poverty in Colombia has skyrocketed to 42%, and unemployment hovers around 15%.

In the opinion of those who participated in the survey, corruption is the most worrying problem (31%), followed by unemployment (25%) which has affected about 1.8 million people, public safety (15%), and coronavirus (2%).

After a year and a half of the ongoing health emergency, 7% of those surveyed said that they did not want to be vaccinated for COVID-19, while 27% of these vaccine-hesitants fear side effects.