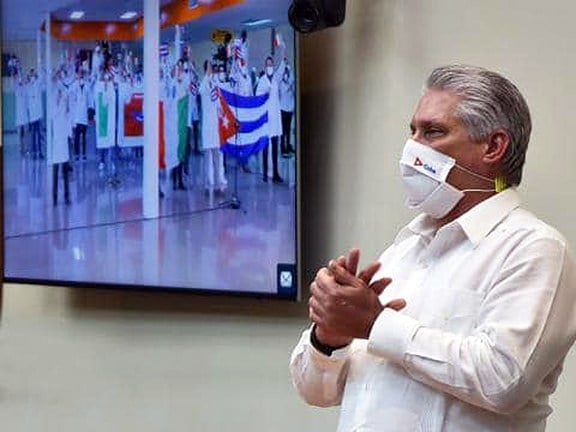 Every evening for the past two and a half months the people of Cuba have come out on their streets and porches to applaud and cheer for the 3,000 members of the Henry Reeve medical brigades who are fighting the Covid-19 pandemic on the front lines in 28 countries with 34 brigades. For the Cuban people these medical professionals are not just doctors going abroad but representatives of a society where health and human life are considered an absolute priority.

After two and a half months the first brigade that had been in Lombardy Italy returned home and were met at the airport by President Diaz Canel via a video conference who told them, “With your noble gesture and your brave disposition to defy death to save lives, you have shown the world a truth that Cuba’s enemies have tried to silence or misrepresent: the strength of Cuban medicine! You represent the victory of life over death, of solidarity over selfishness.”

In the last 55 years 600,000 Cubans have provided medical services in 160 countries and that entire time the US State Department has done everything in its array of dirty tactics to discredit them and undermine their purpose of administering health to poor people most especially in Latin America. This included the Cuban Medical Professional Parole Program (CMPP) from 2009 to 2017 whose whole reason to exist was to lure Cuban doctors away from their mission with promises of passage to the US where there would be green cards and lucrative jobs waiting. It never stops, last year the Agency for International Development (USAID) the agency that provides funds for subversion programs against Cuba allocated $3 million specifically for projects directed against the medical brigades abroad.

The example of Cuba’s model of health care for all and sharing that view with the world sends the US and the champions of neoliberalism into some kind of frenzy. It is the antithesis of the US model of health that excludes millions and sends others into bankruptcy to pay doctor and hospital bills. Imagine a model like that minus the parasitic insurance corporations and pharmaceutical giants who want to control all medicine and legally sell it at any price they wish. It is no wonder they will stoop to any depth to smash the prestige that Cuba maintains with the world. Can anyone think of just one sustained humanitarian mission made by the US that did not have strings attached?

The Trump Administration did not start this attack but has escalated it by sweeping sanctions that now includes an end of all remittances from Cuban Americans to their families on the island. Over and over Trump has denounced Cuba’s medical brigades for constituting forced labor ignoring the fact that in Cuba they have many more volunteers to go on these missions than positions and that the biggest heroes to the Cuban people are their doctors.

This period of crisis offers a great possibility for international cooperation between nations when it comes to medical assistance as illustrated by the Cuban Covid-19 brigades. One of the criticisms from detractors of the program is that Cuba is receiving billions of dollars in revenue while only paying a fraction of that to the medical professionals. It is hard for some to look outside of the prism of capitalist relations because they can only see the medical industry in terms of profit to be made. Why is it a crime that blockaded Cuba makes mutually beneficial agreements with countries that can pay for their services? The mindset of these brigadistas is quite the opposite of being oppressed because they are fully aware that their contribution helps ensure that the payments contribute towards the entire Cuban population being afforded universal healthcare. And in practically all the countries the patients receiving the care of the Cuban doctors have to pay nothing. Their accommodations are not luxurious like that afforded to many doctors; they live with just the basics because these are emergency missions in the pandemic focused on saving people’s lives.

In many countries including Argentina where there is no Cuban medical brigade, unemployed doctors and professional medical associations have expressed varying levels of opposition. But this doesn’t easily equate because one aspect of the Henry Reeve Medical Brigades, which were developed in 2005, is they are specialized and trained to hit the ground running to work in emergency triage situations, like natural disasters and quick-moving viruses. They come as a team made up of family physicians, epidemiologists, biostatisticians, health technology engineers, and biotechnology experts, and many have the experience of being on previous international missions. The Cuban brigades are not the long term solution to the shortcomings in a country’s health care system but rather a stop gap solution to an immediate need as they did in Haiti after the earthquake in 2010 where they provided care for 40% of the victims or Western Africa in 2014 after the Ebola breakout where once again it was Cuban doctors leading the fight with over 600 medical professionals while Western governments watched. In 2015 a Henry Reeve Brigade went to Nepal after the earthquake there and treated 4600 patients many of whom, as the doctors reported, had never heard of the country of Cuba before.

In the fight against Covid-19 each country makes its own contract, its own time table and its own area of need with the Cuban Ministry of Health. Some pay while others only cover the cost of transportation and accommodations in their countries. The basis of these agreements are not about commercial transactions but rather cooperation and importantly every country that has applied to Cuba for a medical brigade during this pandemic has gotten one.

In his conclusion to the returning medical team, Diaz Canel said, “Witnessing the growing world clamor for our brigades to be nominated for the Nobel Peace Prize has filled us with healthy pride these days. With the mission you have completed, you have made a solid contribution to advancing this movement.”

Diaz Canel’s reference was to a blooming international campaign to nominate the Cuban Medical Brigades for the Nobel Peace Prize in 2021 which will be launched in the US on June 16 in a webinar with actor Danny Glover and the Cuban Ambassador to the US Jose Ramon Cabanas. To sign on to the campaign go to www.cubanobel.org