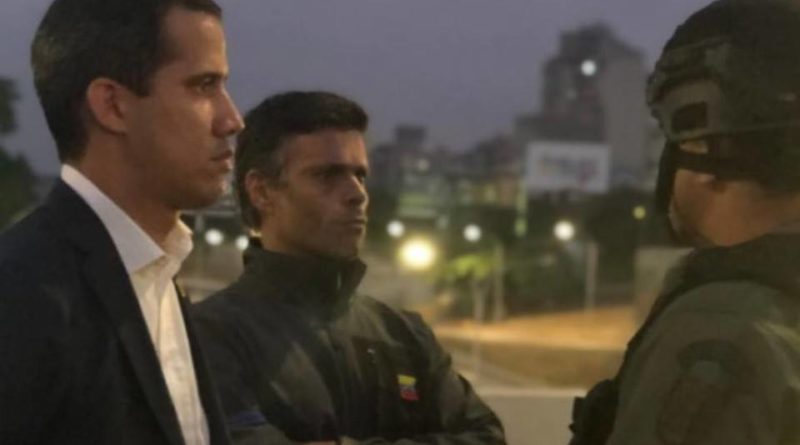 The great victims of the advancement of the electoral option In Venezuela are the members of the clique nominally headed by Juan Guaidó and led, in factual terms, by Leopoldo López.

With this substantial advance on the road for an electoral solution, the currents of the leaders of Voluntad Popular and other extremist organizations are more isolated than ever, especially if the recent stagnation as a real option for change is added to the recent fiasco of the mercenary invasion and the internal crisis afecting its main supporter, the President of the United States, Donald Trump.

The situation faced by López and Guaidó (plus the wing of Primero Justicia led by Julio Borges) could be considered even more precarious than that experienced by them after the attempted coup d’état on April 30, 2019 and the events of Macuto on May 3, 2020.

Maduro has the initiative

Among the features of the defeat, one that has a high weight in the current circumstances stands out: the election of the CNE, with the participation of an opposition sector, is new evidence that the person controling the political initiative is Maduro.

The sociologist Javier Bierdeau put it this way: “Wake up, the initiative and the political-institutional advantage in the internal political order is held by Maduro …” .

That reality of Maduro as the one making the moves, disarticulating the Guaidó project, is something that has been happening for a long time. On most items on the 2020 political agenda, including Covid-19, the opposition clique has looked defensive or, at best, counteroffensive. The government has certainly had to respond to attacks, but not those of the López-Guaidó duo, but those directly executed by the United States.

The table? … There is no small enemy

It has already been said too many times that one of the problems of the opposition leadership is that it underestimates the government. But since the middle of last year, it has also underestimated internal groups expressing dissenting positions.

Anthology was the contempt of the binomial López-Guaidó (in this case, with the almost full support of the G-4, made up of Democratic Action, First Justice, A New Time and Popular Will) regarding the parties and personalities that, in the second semester of 2019, decided to sit down to talk with government representatives. The disdain was appreciated even in the remodeling that they put on it: they were called “the Little Table” and they branded them as a minority, in addition to other epithets such as traitors, collaborators and “enchufados” .

But the members of that opposition segment were not influenced by the disqualifications. They continued working with the focus on the electoral exit. To a large extent, this sector corresponds to the success of the declaration of legislative omission that triggered the appointment of the rectors of the renewed CNE .

At the end of 2019, within the National Assembly, the rebellions that came shaking the floor of the opposition sottovoce emerged. Connoisseurs of the internal reality of anti-Chavismo claimed that, once again, the ruling clan underestimated rivals and overestimated its own leadership. This caused that on January 5, 2020, the day of the renewal of the AN directive, Guaidó was unable to achieve his intention of being ratified by a large majority. Instead, a new directive emerged that forced a new self-proclamation and generated the (imaginary) existence of two presidencies for the same legislative body.

This two-headed condition is one of the causes of the legislative omission, although at one point, the two opposing sides had agreed to an understanding . This, incidentally, occurred only in February, but at this point, given the large number of events that the country and the world have experienced, it seems like a remote event.

Both the leaders of the nicknamed “Mesita” and the dissident side of the AN gave lessons to the arrogant internal “majorities” of the opposition : there is no small enemy.

The G-4, as a surviving structure from the shipwreck of the Mesa de la Unidad Democrática, has never been an alliance beyond the parliamentary benches and some of the booty distributions that have been carried out under the figure of Guaido’s interim-ship, for example, the dismemberment of Monómeros, the Colombian subsidiary of Petróleos de Venezuela.

Thus it has kept an appearance of unity that suffered serious damage with the dissent of January, since the parliamentarians who broke with the Guaidó plan belonged to this party block.

Another warning that the coalition was breaking up came precisely with the resumption of negotiations to appoint the CNE, in which deputy Stalin González of Un Nuevo Tiempo had a leading role.

Now, with the appointment of the new CNE and the start shot for the parliamentary elections, it is expected that each of the parties and, more specifically, the parliamentarians, assume a position on whether or not to participate in elections that they depend on for remaining in the AN. It is not unreasonable to think that many will participate to defend their share of power.

Arguments in favor of participating will not be lacking. The first of them is the very certain possibility that, if not, Chavismo will retake the majority it had after the 2005 elections, when the opposition declared a boycott of the electoral process. They will also say that if they, those of the G-4 parties, do not run, those of the “Mesita” will do so and will then become the country’s institutionalized opposition.

Against there will not be so many arguments, but there will be a powerful club: The US threats to treat them as they are already treating government leaders . The sanction announced by the “designated ambassador” James Story against the president of the AN, Luis Parra, fulfills this function of intimidation to anyone who is thinking of disagreeing with the line of regime change in which the free call elections will only be held after a political “cleaning” by a transitional government.

It remains to be seen how many succumb to the pressure and how many endure it.

The swift move carried out by opposition factors and which received a lightning response from the Supreme Court of Justice, puts the entire clique in serious trouble, but especially the nominal star, Juan Guaidó .

If the new CNE comes into office with the same speed that has characterized its election and calls the legislative process, the expiration date of the current AN is ratified, according to constitutional provisions: January 4, 2021. Upon expiration of its term, all parliamentarians elected in 2015 will cease to serve and will be replaced by those who are elected in this year’s voting. Among those deputies, obviously, is Guaidó. If you do not participate in the elections, by January 5, 2021, you will not even be a deputy, so it will be even more difficult to keep the fiction of the presidency in charge, which already this year lost strength due to the bicephalia in the AN .

The journalist Maripili Hernández stressed on her Twitter account that with the parliamentary elections, the interim is completely diluted. For the communicator, Guaidó has no choice but to deny the legitimacy of the elections to the end because accepting them would force him to run and campaign as a candidate for deputy, an inadmissible degradation, with the aggravating circumstance that there are great probabilities that, in such a case, he will lose the seat, because Chavismo would present an excellent opponent and its well-lubricated machinery, and many opposition leaders would not support him because they are already disappointed in him, and would be more so if they see him in those fights.

Undermined the credibility of the average opponent

The political scenario in which the new electoral authorities are appointed is very complex for the opposition forces, despite the great discontent with the general situation in the country.

Although the opposition segment that is waiting for an electoral solution is important, the rabid and incessant campaign of discredit that has been carried out against the outgoing directors of the CNE has undermined the credibility of the average opponent in the vote, to a degree that in many cases is irreversible. .

The new faces in the Electoral Power may not be enough for those people to regain confidence in the vote . The fact that the designation had to be made by the TSJ (due to the omission of the AN) plays in favor of those adverse trends.

Intentionally or not, the systematic demolition of faith in the vote hurts the opposition at a time like the present and could help the government to regain control, even partially, of the Legislative Branch.

Political scientist Carlos Raúl Hernández, a fervent supporter of the electoral solution, launched the following hypothesis: “1. There will be elections and part of the opposition will attend. 2. Abstentionism, as in 2018, will make efforts to defeat the ‘collaborators’ and let the government win. 3. Whatever happens, that will be the AN 4. Abstentionists will possibly disappear from the political scene ” .